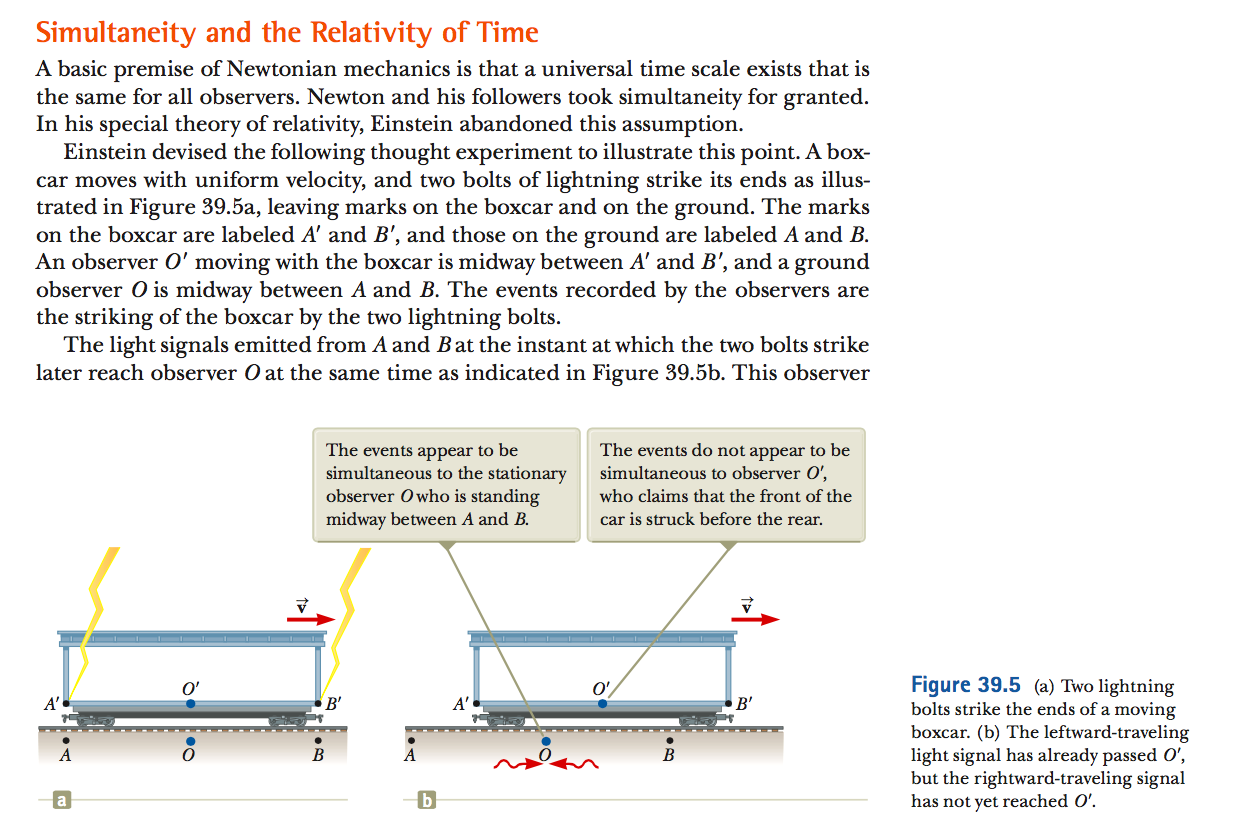 The thought experiment fails to specify which reference frame establishes $\vec{v}$--the observer on earth or the observer in the boxcar.

Determining what $\vec{v}$ should be ( and according to whom ) becomes less trivial in the following example, where there are more than two reference frames and no $\vec{v}$ is given:

What speed do the Earth-based observers measure for the approaching landing craft?

Solving for $\vec{u}$ according to observers on earth, we use the Lorentz Velocity Transform:

Suppose we wanted to answer the following question:

What speed do the Earth-based observers measure for the approaching mothership?

From the outside observers reference frame, the lightning strikes the front and the back of the car simultaneously, and because they are both an equal distance away, and the light from each of the events is traveling at the same speed ($c$), so they will reach the observer O at the same time: $$t = \frac{|B-O|}{c} = \frac{|A-O|}{c}$$

From the reference frame of the observer in the boxcar (O') who is travelling at speed $v$ relative to the ground (or, if you like, for whom the ground appears to be moving backwards at a speed $v$), the light from the from the front of the bus has less distance to travel, as distances in the direction of motion are length contracted. The length to the front of the car is now: $$ L = |B-O'|\sqrt{ \left(1-\frac{v^2}{c^2} \right)} < |B-O'| , $$ because, at the moment of impact, the lightning strike appears to be moving toward the observer at speed v. So, since light travels at the same speed regardless of reference frame, the lightning from the front will reach observer O' before it otherwise would if the car was stationary.

As for why $s$, $u$, and $v$ are defined in the way they are, that goes back to the derivation of these equations, which I hope you're book contains, at the very least in the appendices.

2
A question in Special Relativity

1
If there is no definite speed in the universe, only relative speeds, how does energy increase when velocity approaches the speed of light?
0
Clarification of Conclusion of Length Contraction (Without Lorentz Transformations)
1
Which frame of reference to use when calculating time dilation?
1
Two-Dimensional Lorentz Velocity Transformation Problem
0
Can the same observer observe length contraction and time dilation at the same time?