I have two questions about Magnetic Field.

B is going into the page, and particle is moving to the right 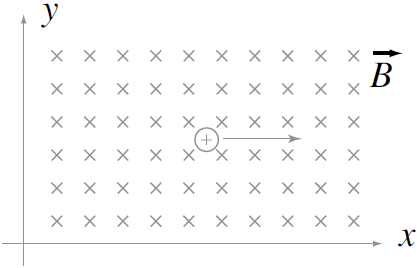 Like this. The textbook says that the particle will go in a circular motion with a centripetal acceleration due to the force by magnetic field.

What happened to the cross product? I considered the angle formula for cross product ||A x B|| = ||A||*||B||*sin(theta). However, the force formula does not have magnitude signs over V nor B. So How did it get converted to qVB ?

The magnetic force acting on a charge $q$ moving with a velocity $v$ through a uniform magnetic field $B$ is give by:

It's magnitude is give by :

where θ is the angle between the velocity of the charge and the direction of magnetic field.

Now, about your question:

1) You have a magnetic field B pointing into the page. The particle is moving to the right through the magnetic field. So here, the velocity v is perpendicular to B. So the magnitude of force will be

2) A static magnetic field means the magnetic field is not changing with time. A magnetic force do no work, whether static or not. We can derive it. Suppose we have a charge q moving with a uniform velocity v through a magnetic field B. Let the charge travels a distance dl in dt time, so that

The magnetic force acting on the charge is

If the applied field is time-varying then the force will also vary and the particle change the radius of circular trajectory, which result in a helical like motion. This means there is a net displacement along the direction of applied field. However in that case also, the work done by a magnetic field is zero. The work done to speed up the particle is done by the induced electric field generated by the changing magnetic field as per Faraday's law. The electric field can do work.

Remember that in deriving the work done by a magnetic force is zero, we haven't used any constraint that the field is uniform, about the particle's velocity etc. This means the rule is valid in all cases.

74
How can magnets be used to pick up pieces of metal when the force from a magnetic field does no work?

2
accelerated charged particles and interaction with magnetic field
1
Questions on electric field formed in conductor and the magnetice field it moves through
0
Speed of a charge in a magnetic field
2
Question about magnetic force
2
Formula of the Radius of the Circular Path of a Charged Particle in a Uniform Magnetic Field
0
Interactions between charge and magnetic field
0
Does magnetic field make particle move in the direction of magnetic field(In circles)?