How is neutron star-neutron star merger different from Black Hole-Black Hole merger and what information can be extracted from gravitational waves emitted by these processes?

[Updated at the bottom for the first GW detection of a NS-NS merger.]

There are a few big differences:

First, neutron-star masses fall into the range 1 to 2 times the mass of the sun (M$_\odot$), whereas the lightest known black hole is thought to be ~3M$_\odot$. Moreover, in the first several GW detections of BH binaries, the BHs each have masses in the range 7–40 M$_\odot$. So we expect all NS binaries to be lighter than all BH binaries. This is important because roughly speaking the lower the mass of the system, the higher the frequencies its GWs reach before merger.1 But the LIGO/Virgo detectors have fixed frequency windows in which they're sensitive, so this means the detectors will see NS systems "earlier" in their evolution than BH systems, which in turn means that the NS systems will spend longer in the detectors' sensitive windows. It also means that the actual merger of NS binaries will be at very high frequencies, which I'll come back to in a moment.

But acknowledging that basic difference in mass scales, let's ignore it for now. Imagine identical binaries, composed of identical masses and spins, except that one has a pair of black holes (BHs), and the other has a pair of neutron stars (NSs). The BH binary has a mass lower than we expect to be common in nature, but otherwise this is realistic and makes it easier to compare these next few points.

Second, during the long inspiral — before the neutron stars have touched — they are raising tides on each other. But it requires some energy to raise a tide. That energy comes out of the orbit itself. So the tidal effects change how quickly the binary merges (compared to a BH binary). See this paper and references therein for technical details.

Third, the black holes continue their inspiral for longer, simply because they are more compact, so they don't merge until later. This means that BH signal continues to grow larger and longer. The NSs, on the other hand, can't get that close simply because they occupy more space. They touch or simply break each other apart at some point, which messes up their ability to emit really powerful gravitational waves. This is discussed in this paper.

Fourth, BHs cannot break apart and send a tail flying off. NSs can. And that ejected tail can produce its own gravitational waves, which imprints a signature on the signal.

Fifth, after BHs merge, they quickly "ringdown" to a stationary black hole. In fact, their gravitational-wave signal more-or-less exponentially drops off after the merger. This is not true of NSs, which can have funny shapes or "mountains". And because the merged NS will be rapidly spinning these mountains can emit gravitational waves that keep the signal "on" for much longer than in the BH case. See Figure 1 of this paper for an example of the NS signal. That post-merger signal also damps away, but not nearly as quickly as for a BH.

So these are pretty substantial changes to the signal, meaning that in principle it should be possible for gravitational-wave detectors to distinguish between NS and BH binaries. However, these last four points mostly come at very high frequencies (as mentioned in the first point). It turns out that many of the differences between NS and BH signals are at the higher end of frequencies that LIGO/Virgo will be able to detect. However, these may be extremely important findings, so the LIGO/Virgo collaboration already has plans to tweak their detectors so that they will be more sensitive to these high frequencies in the future.

But the sixth and final point is potentially the most important. Merging BH binaries have only mass, no matter. But NS binaries have very dense matter moving at extraordinary speeds, located in regions of spacetime that can emit radiation to distant observers (not trapped inside a black hole). And any time you have that, you'll have lots of photons released — the whole gamut from radio through visible and all the way to gamma radiation. This means that we'll potentially be able to see NS binaries with traditional astronomy, as well as with gravitational-wave astronomy, and potentially even neutrino astronomy. Having all these different ways of seeing a single event will potentially allow us to learn much more physics. This field is called "multi-messenger astronomy", and there are loads of conferences happening soon and papers (like this one) being written about it.

On Oct. 16, 2017, astronomers announced the first detection of gravitational waves from a system involving neutron stars, along with electromagnetic and neutrino observations of the system. The GW announcement is here, while descriptions of the electromagnetic and neutrino[2] observations are here, and many references therein. There are also more papers listed here and here.

This detection is important for several reasons. It is the first GW detection of a system with matter as a primary ingredient.[3] But perhaps more importantly, LIGO/Virgo data provided a good trigger and localization (that's time and space coordinates for the event, respectively) for traditional electromagnetic and neutrino telescopes to search for the system, thus opening the era of multi-messenger astronomy with a very impressive system. Combined, these provide good (new!) evidence that short gamma-ray bursts are caused by the merger of neutron stars, which are thought to be responsible for creation of most of the heavy elements we see in nature.

The results are in line with what I said above. In particular, the results are mostly relevant to points 1 (low total mass / high frequency) and 6 (multi-messenger astronomy). On the other hand, this particular event doesn't really touch very much on my points 2 through 5. Other than the fact that these were (likely) neutron stars, the GWs alone didn't actually give us much new physics.[4] The main reason is that the system was very light — as all NS-NS systems will be — which means that the most interesting physics happens at high frequencies (~1kHz), but LIGO/Virgo currently have pretty large noise levels at those frequencies. Eventually, there are plans to "tune" the interferometer to have very small noise in some narrow band at high frequencies (at the expense of higher noise at other frequencies). Hopefully, that will give us more interesting details on the physics of future systems.

On a related note, the LIGO/Virgo collaboration has published a very interesting figure depicting the masses of known BHs and NSs, including the detections to date. It's not clear if there's really a "gap" where BHs don't get much lighter than 5M$_\odot$, or if that's just a measurement/selection bias. But it is pretty clear that NSs won't get much heavier than 2M$_\odot$. 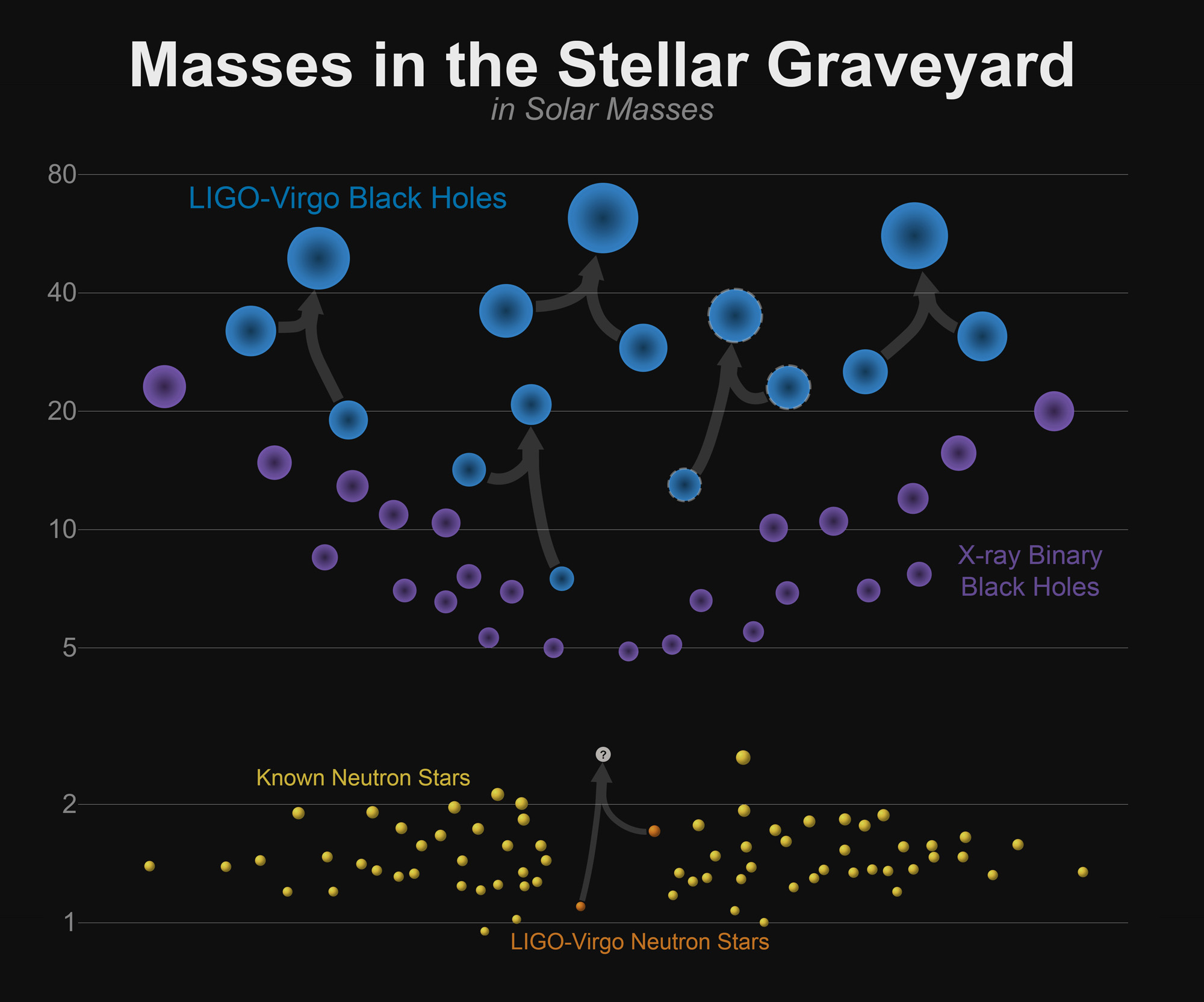 1
Can Ligo tell a blackhole and neutron star of same mass throughout the inspiral?