May a point rotate about itself?

Suppose we have two equivalent rigid cylinders. Cylinder 1 is moving (translating) with constant velocity of v. Cylinder 2 is rotating without slipping and its center’s velocity is constant and equal to v. So, the motion equations of both centers of cylinders are same (x=vt). If we consider centers of cylinders, their kinematics are same. My questions are: 1. What is the difference between these two points (centers of cylinders)? 2. Can we define rotation for a point about an axis that crosses that point? 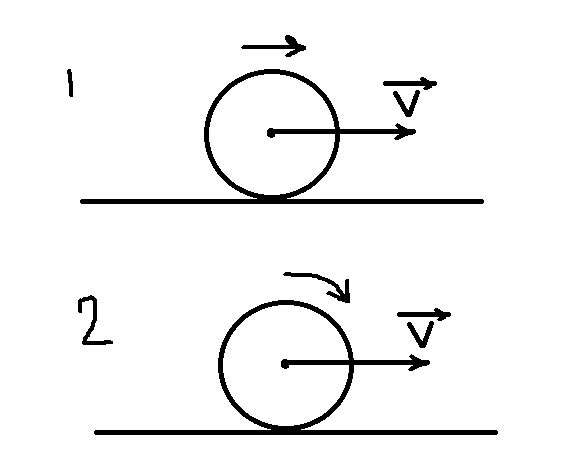 Rotations for infinitesimal points are not defined. A rotation is only defined when you have two or more points as a way to describe the fact that their relative distance remains constant.

Also rotational motion is shared for an entire body, meaning that all point on a body rotate the same. The idea of location for rotation only enters when linear velocity is considered as the location where such velocity is zero.

Your first case of a purely translating body, it can be said this is equivalent to a zero rotational speed located at infinity such that $v = \omega \cdot r = 0 \cdot \infty = \text{finite}$.

So the rotational motion (of the centers) is different in the two cases, and the translational motion is only equivalent at the central axis and nowhere else.

If a cylinder is translating with velocity $v$ at the center and rotating by $\omega$ then it is said the motion is equivalent to an instantaneous rotation about a point $h = \frac{v}{\omega}$ above the center. For pure rolling to the right, the rotation is clockwise (negative) and the center of rotation is at $d=-r$, or at the contact point.

"What is the difference between these two points (centers of cylinders)? "

1) there is no difference in the motion of the points (lines that extend down the cylinder, actually). They each translate in space with the center of the cylinder as you might expect.

2) "Can we define rotation for a point about an axis that crosses that point?"

I assume your asking if a point can rotate about its 'own axis'. Since points are mathematical objects of zero dimension, with no internal structure, it is mathematically non-sensical to talk about them rotating 'about their own axis'; there is no internal axis for them to rotate about. Actually, points and the real number line are a little pathological/non physical when you consider them carefully... they are 0 and 1 dimensional objects, but everything you've interacted with is 3D, even if small or thin. Take a look at the wikipedia page for a point for more information.

2
Ideal 2D Unicycle Kinematics
3
Understanding rotational motion on a rough surface
0
Methods to use in problems with equations of motion, where is required to determine a particular acceleration
0
Question about Relativistic Kinematics' problems
1
How can a particle which is not moving have an acceleration?
0
Projection of elliptical motion
1
Screw Axis (ISA) and its usefulness
1
Why does calculating relative velocity with vectors yield diferrent results than with distances?