Below is a picture of Giant Water Lily. Scientific Name: Victoria Amazonica. Leaves of some of these could be as big as 3 m diameter and carry a weight of 45kg spread evenly and can support a child. Now the problem:

Suppose that a leaf of such flower with a child is floating freely on water. Child crawls along the edge of the leaf until it arrives back to the starting point. In other words, he makes a full circle in the reference frame of the leaf. Question:

What is the total angle $\theta $ that the leaf turns through in time child crawls? (in the reference frame of water). Assume that the leaf is a large rigid circular disk. Ignore air and water resistance.

ftiaronsem's solution is absolutely correct if we assume that the leaf can only freely rotate about its geometrical center. However i was keeping in an eye that the leaf is not connected to the ground and can freely move in any direction. 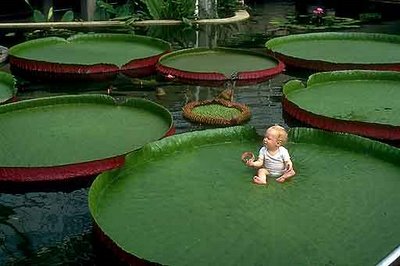 Note: to illustrate the motion of the pad more clearly, I made a video.

Let the pad have radius $R$.

Imagine looking down on the pad from above. The baby is on the right, crawling counterclockwise. 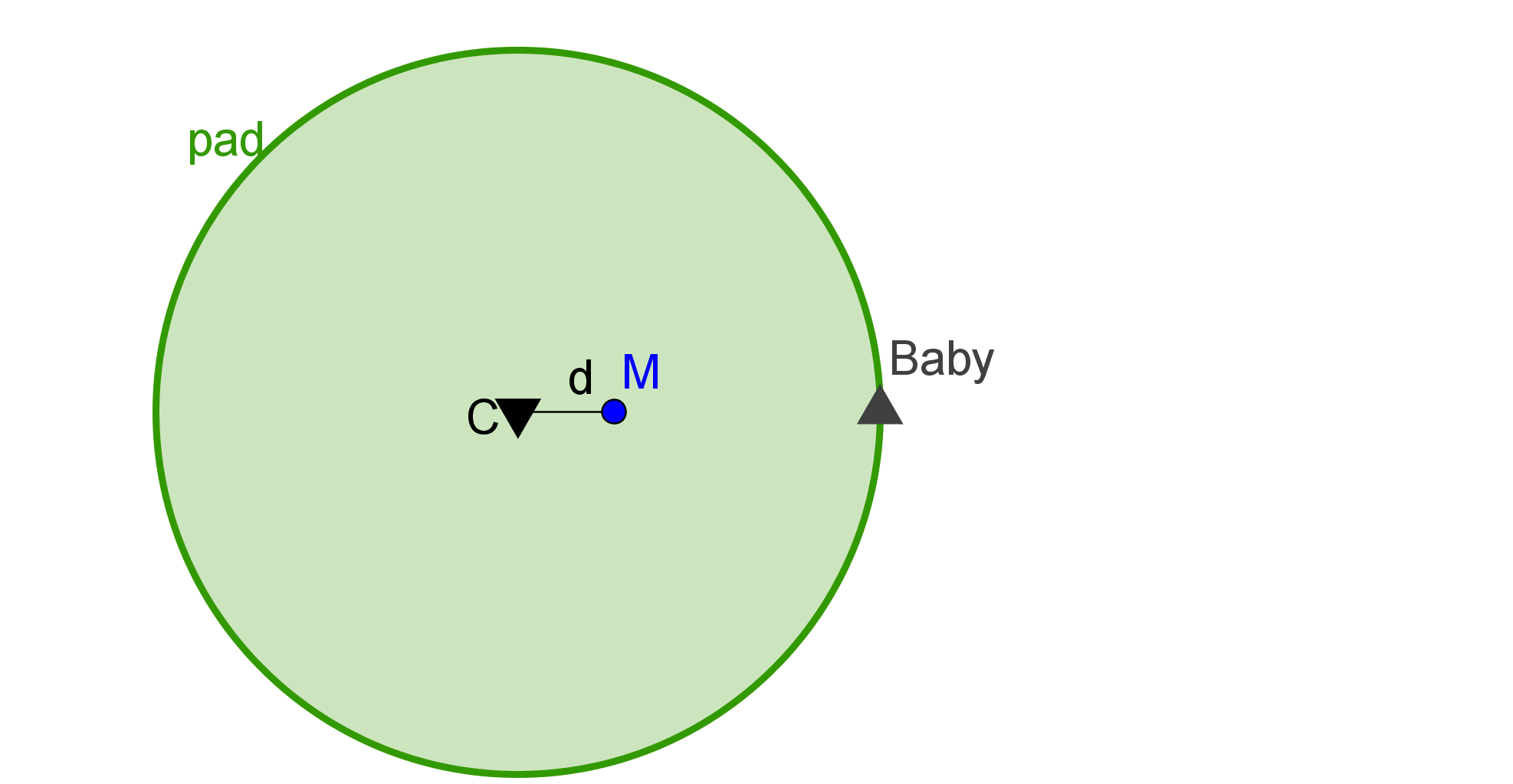 As time goes on, the baby moves around the edge, and the lily pad moves to stay perfectly opposite the baby. This ensures that the center of mass doesn't move. Because the length $d$ is fixed, $C$ must always stay the same distance from $M$, so $C$ must move in a circle around $M$. The baby moves in another circle of radius $R-d$ so that the distance between the center of the pad and the baby remains $R$. We can draw in the trajectories of the point $C$ and the baby, and add a radius, like this: 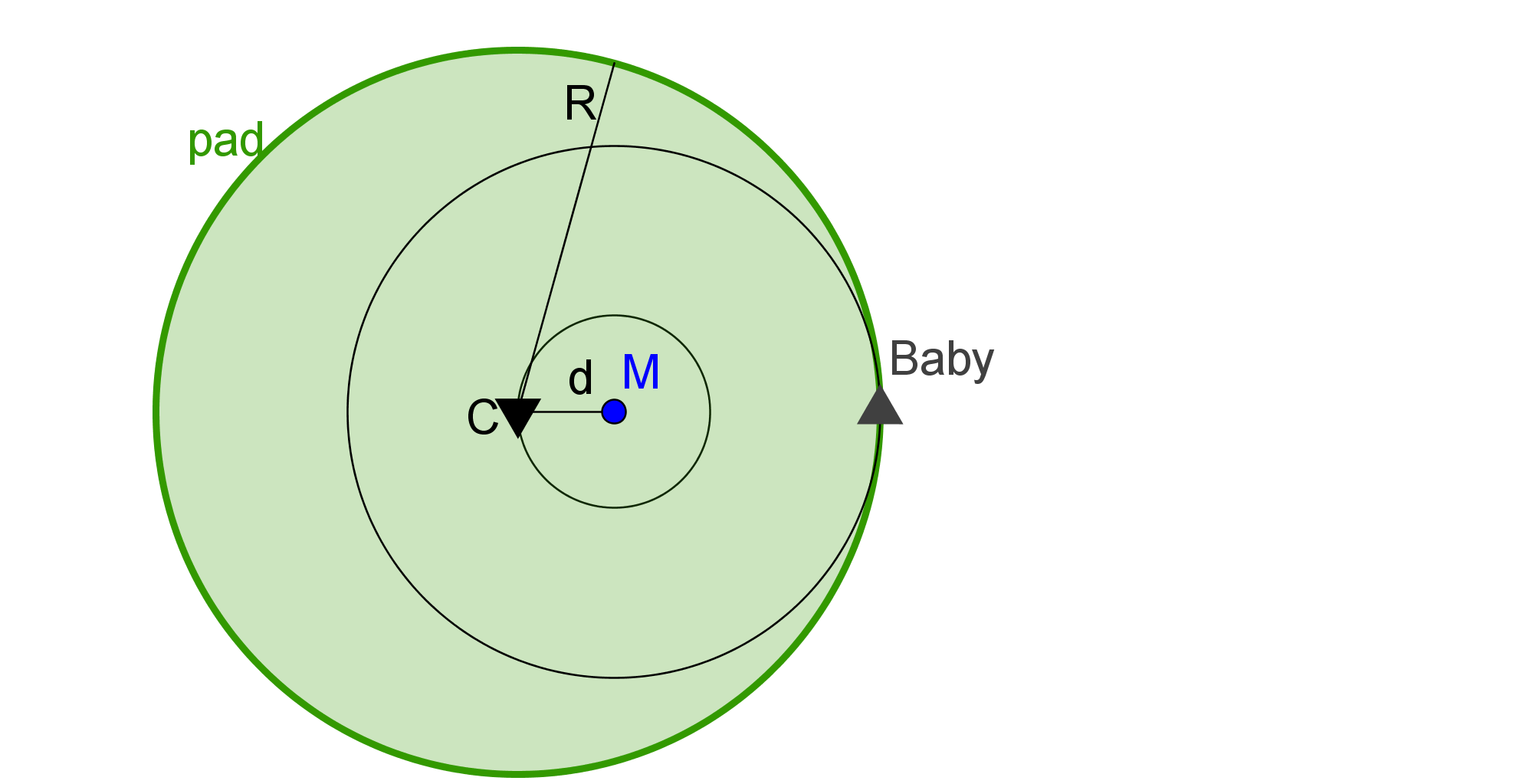 Together, the baby and the center of the pad have only one degree of freedom. Either of them can choose to be at any given point on their trajectories, but the other one is then forced to be opposite them. Let's describe their positions by an angle $\theta$ from the horizontal. To show this, I'll move the baby up a bit and draw in $\theta$. 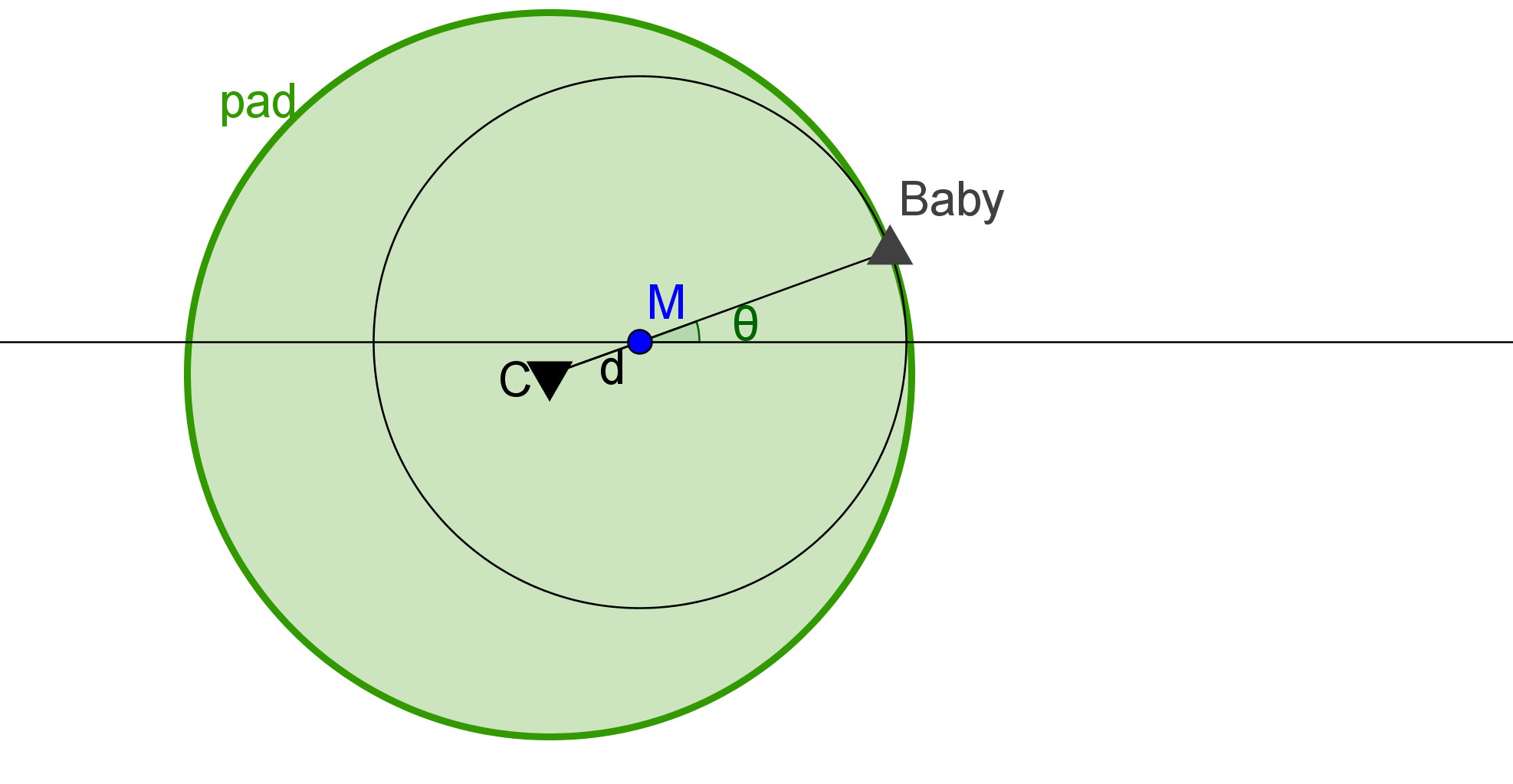 Simplifying the algebra using the expression for $d$, then integrating over time and using the initial condition $\phi(0) = \theta(0) = 0$, we get

$\phi$ is what we're after, but we want to know $\phi$ after the baby has crawled far enough to return to its starting point. The minus sign on $\phi$ indicates that the pad spins counter to the rotation of pad and baby around the center of mass.

To find $\phi$, we need to use the information about the total amount the baby crawls. Introduce a new angle $\alpha$ that represents how much the baby has crawled around the pad from the pad's point of view - we are done when the baby gets to $\alpha = 2\pi$.

(note: I originally left out the term $R \dot{\phi}$, which led the initial answer to be off) This simplifies to

1) The flower is connected to the ground, i.e. by its shaft, so that its center of mass is not moving.

As Marek correctly pointed out:

This can directly be derived from the conservation of angular momentum.

By integrating this over the time $t$ the child is crawling, you get: 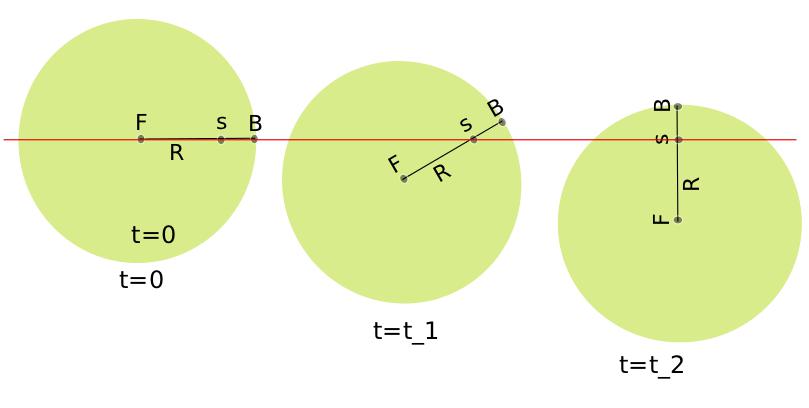 In my first attempt to solve this general case of the problem (which I have deleted due to it being nonsense), I assumed that the translational part of the flower is covered by applying the parallel axis theorem. However, as Mark pointed out correctly, the parallel axis theorem is not applicable here. For a detailed explanation watch Mark's great video and read through the book chapter he linked in the comments.

Please see Mark's Post for a detailed and correct analysis of this situation.

ftiaronsem is right, i think!

The law of conservation of angular momentum for this system must be expressed as $I_m\omega_m+I_M\omega_M=0$ where $I_m$ and $I_M$ are the moments of inertia of the child and the pad about the axis which passes through the center of the mass of the whole system and $\omega_m$ and $\omega_M$ are corresponding angular velocities in the reference frame of the ground (or stationary water). More specifically, $\omega_M$ is angular velocity of the center of the pad.

Let's consider the case where the child moves along a diameter of the pad. This is a linear motion and the law of conservation of linear momentum for this system must be expressed as $mv_m+Mv_M=0$ where $m$ an $M$ are masses of the child and the pad and $v_m$ and $v_M$ are corresponding velocities in the reference frame of the ground (or stationary water). Let's gather the results together:

can be simplified. For purposes of brevity let's introduce the ratio $x=\frac{m}{M}$. Then finally the angular displacement of the pad: $$\theta=\frac{2x}{(1+x)(1+3x)}2\pi$$ An amazing thing of this result is that the angular displacement of the pad has a maximum absolute value. It reaches the maximum displacement at $x=\frac{m}{M}=\frac{1}{\sqrt{3}}$ where the maximum is:
$$\theta_{max}=(2-\sqrt{3})2\pi=96.5^\circ$$ Another surprise is that if the child is infinitely heavy then the pad's rotation is zero!

This problem can be solved in two steps:

The lily only rotates

This can be resolved geometrically. The baby must turn right to keep their circular trajectory, with respect to the lily. It will therefore exert a force on the lily equal and opposite to their centripetal force (i.e. the force they use to turn right).

What is the net effect of force on the baby as time passes? We can obtain it be subtracting the centripetal forces at small intervals of time. Geometry and common sense show that the net effect is a vector tangential to the trajectory of the baby (obviously).

Now we can think about the net effect of the force on the lily. The force is exactly the same magnitude as the one on the baby, but with opposite direction. We can also see it as the same direction and negative magnitude. So the forces will compose over time in the same way as the baby, but with the opposite sign. So in other words the net effect is that the lily spins backwards.

As there are no other forces acting on the system, the lily will only spin on its axis.

Since the baby always keeps the same distance from the center of the lily, both $\ddot\theta=0=\ddot\phi$ and therefore

Angular momentum must be conserved, so:

Now, the time that is necessary for a full rotation of the baby is $t_{f}=2\pi/\omega_b$. The angle $\phi$ rotated by the lily is therefore equal to

This answer is just for the purpose of discussion. It will be edited sometimes and It may contain wrong conclusions.

@Martin: I am trying to image the motion you are describing. Unfortunatelly I have some severe difficulties, since I always run into some kind of contradiction. Therefore I have drawn two motions, in which the pad is not rotating. Please tell me which one you think is appropriate for this problem.

Please also tell, if you think of a different motion of the pad and try describing / or drawing it.

This answer is just for the purpose of discussion. It will be edited sometimes and It may contain wrong conclusions.

@Martin. I wanted to add another argument that one has a spinning motion as well as an orbital motion. In order to keep the arguments seperated, I choose a new answer. Please consider the following

In order to further clarify the intended motion I have drawn new pictures, illustrating the situation. The red line is marking the starting position of the baby. The curved arrow is indicating the angular velocity of the pad (counterclockwise). In these pictures, the baby itself is always moving clockwise.

@Mark. If you are still following this question, feel free to include or modify any of my pictures in your answer.

Not the answer you're looking for? Browse other questions tagged newtonian-mechanics angular-momentum rotational-dynamics reference-frames or ask your own question.

5
I need help figuring out what is wrong in this aspiring perpetuum mobile
0
Momentum and Kinetic Energy Conservation in Inelastic Collision
2
Why not include the energy exerted by the pitcher in a kinematics problem of a flying baseball?
8
Physical meaning of frames in general relativity
0
After applying a torque (on one side) of a mass in free space, are the rotational and kinetic energy equal?
5
Blinking flashlight infalling into the black hole, as frequency → ∞
1
Simple Question about Acceleration and Conservation of Energy
0
Determining the angular velocity from an inertial frame of reference if given a system of two disks stacked
0
What is Rindler referring to when he writes ‘particles’?