Direction of deflection of Coriolis force on Earth

I'm a bit confused about Coriolis force direction on Earth. The observed deflection is to the right in the northern emisphere and to the left in the southern one.

But what about an observer in the northern hemisphere throwing a ball southwards? 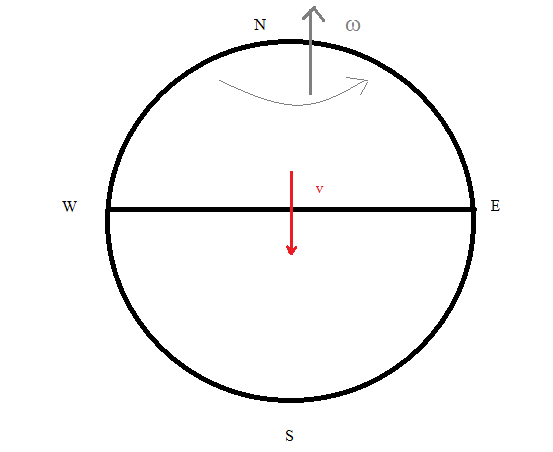 Are you asking about a ball being thrown from the northern to the southern hemisphere? In that case the deflection would change from deflecting right to deflecting left as it crosses the equator, though near the equator the amount of deflection is minimal.

If your projectile still had enough velocity to cross the equator, the ball would still have that same eastward velocity of 342 mph that it had at launch (neglecting air friction, outside forces, etc.). As it made its way over 45° south latitude, the ground would be moving eastward at 707 mph and the ball eastward still at 342 mph, so the ground would be moving eastward faster than the ball. Relative to you, an observer in the north, the ball would still be deflecting to the right, though that deflection would decrease as it neared the opposite southern latitude. Once the ball made it to the opposite southern latitude, it would then start deflecting to the left (eastward). This is true for any motion crossing the equator. The ball will not start to deflect in the other hemisphere's direction until the ball has passed the latitude opposite from its originating latitude. For instance, if a ball is launched from, say, 35° north latitude towards the equator, it will deflect to the right, cross the equator, continue deflecting to the right (while lessening its deflection as it approached 35° south latitude), and then start deflecting to the left once past 35° south latitude. To a stationary observer in space the ball would appear to travel in a straight line while the earth rotated under it.

If the ball/projectile was launched from the North Pole, it would have no eastward velocity, thus the ball would appear to be travelling to the right (west) equal to the velocity of the ground at that latitude (i.e. 707 mph at 45° North). As it crossed the equator, it would immediately appear to start deflecting to the left (east) and would eventually land at the South Pole, assuming sufficient initial velocity. To a stationary observer in space the projectile would have travelled in a straight line from pole to pole.

Just for clarification: if your ball was launched south from the equator, the ball would have an eastern velocity of 1,000 mph, and as it crossed 45° south latitude, the ground would be moving eastward at 707 mph, while the ball was moving at 1,000 mph, thus appearing to deflect to the left.

The above answers do not take into account the vector nature of $\omega$. I venture to provide an answer that hopefully should satisfy the questioner. We Consider a point at colatitude $\lambda$ on the Earth's surface in the Northern hemisphere. We draw a local coordinate system at this point such that the x-axis points south, the y-axis points east, and the z-axis points in the vertical direction. Then $\vec{\omega}=-\omega\sin\lambda\hat{i}+\omega\cos\lambda\hat{k}$ (because $\vec{\omega}$ points towards the north-pole). The general formula for the Coriolis force is $\vec{F_{c}}=-2m(\vec{\omega}\times\vec{v})$, where $\vec{v}$ is the velocity of a moving body as measured by the observer on the Earth. If we put $\vec{v}=v_{x}\hat{i}+v_{y}\hat{j}+v_{z}\hat{k}$ and the value of $\omega$ above into the Coriolis force formula we get $\vec{F_{c}}=(-\omega\cos\lambda v_{y})\hat{i}+(\omega\cos\lambda v_{x}+\omega\sin\lambda v_{z})\hat{j}-(\omega\sin\lambda v_{y})\hat{k}$. Now, let us imagine that the observer at colatitude $\lambda$ throws a body towards the south. Then $\vec{v}$ for such a body according to the local coordinate system at that point is $v\hat{i}$, where v is the speed of the body.The y-, and z-components of velocity of the body is zero. The formula for $\vec{F_{c}}$,then, is equal to $-\omega v\cos\lambda\hat{j}$ confirming that the body deflects to the right of the observer in the Northern hemisphere. In the southern hemisphere, an equivalent location has colatitude equal to $(180^{\circ}-\lambda)$. If we repeat the above calculation for a body thrown southwards in the southern hemisphere, we find that the body deflects to the left of the observer.

Not the answer you're looking for? Browse other questions tagged earth rotation inertial-frames coriolis-effect or ask your own question.