I have the python script attached below, which is intended to track the trajectory of a charged particle in a static, uniform magnetic field. It is very simple to calculate the instantaneous force upon the particle (it is just the cross-product of its velocity with the magnetic field, B), but unfortunately my super-simple attempt at numerically integrating the effects of this force does not conserve momentum.

I understand why it doesn't. If I imagine that at t=0, the velocity vector is [1,0,0] (with B=[0,0,1]), then the instantaneous force applied will be something like F_mag = [0,a,0], but numerical integration applies this force for more than an infinitessimal period and so at the next timestep, the velocity will be [1,a,0], where a is some non-zero value, which clearly has a greater magnitude than [1,0,0]. Every step momentum will increase by a factor proportional to velocity. Momentum is not conserved --- exponential explosion (see image below)!

I have studied this interesting article that appears to be addressing my issue. It works through a way to calculate the next position of the particle given its position in the previous two time steps. But I want to work out the force that the magnetic field is applying to particle (as I want to eventually include other forces in my model).

Is there a straight-forward way to calculate the force applied by the magnetic field in such a way as so conserve momentum? I can make the step size smaller, but still momentum grows exponentially -- not ideal! I could also just switch over to Runge-Kutta rather than simple Euler integration, but I thought there might be the opportunity here to do something more clever! Thanks in advance for any suggestions you might have! 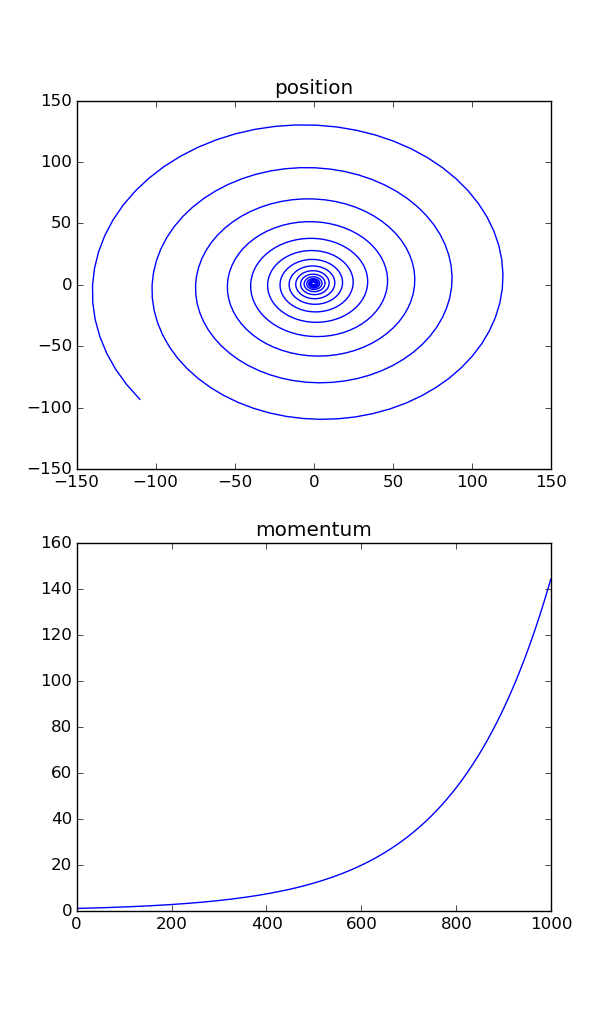 With forward Euler, you're simply out of luck. Because of the way the scheme is constructed, you always make an error in momentum in the same direction, which then compounds, leading to exponential behavior. You need a symplectic integrator, the simplest being leapfrog, or any other Verlet integrator. These still won't conserve momentum on a timestep to timestep basis, but will on average over an "orbit", i.e. a turn around the helix for your particle. From there, you can set the timestep to keep the momentum error below some tolerance, if you wish.

Not the answer you're looking for? Browse other questions tagged electromagnetism simulations software computational-physics or ask your own question.

1
Direction of magnetic force when magnetic field and velocity are not in same plane
42
Apparent Violation of Newton's $3^{\text{rd}}$ Law and the Conservation of Momentum (and Angular Momentum) For a Pair of Charged Particles
2
Charged particle under a uniform electric field
4
Formula of the Radius of the Circular Path of a Charged Particle in a Uniform Magnetic Field
1
How to calculate Centripetal force of a helical movement inside a magnetic field?
0
Momentum Conservation when particle enters magnetic field
2
Algorithm for solving electromagnetic problems using only forces
1
Movement of charged particle in uniform magnetic field