Glowing light around my shadow during sunrise

This morning I was jogging when the sun came rose. I was in the middle of wheat-fields and noticed that there was a glow around the upper part of body's shadow on the fields. At first I thought that the thing only happened in my eyes as a kind of saturation, but then I could photograph it.

Due to the low height of the sun at this time of the day my shadow was quite long. The following pictures are taken within 5 minutes of time differences. About 45 minutes later the glow had disappeared around my shadow but it had become shorter as the sun rose. 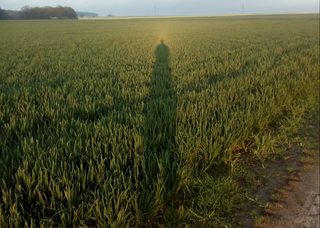 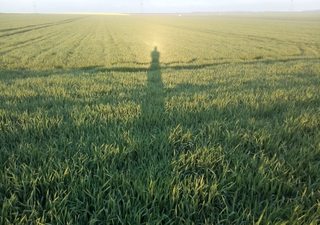 What has happened? Is it related to diffraction or bending? Does humidity play a role (temperature was around 7 °C)?

One week later, same time, same weather, same place. I tried to "confirm" the things answered below. Yes, that glow is only observed by the sensor. I kept my camera away from my body and took a picture. The glow is around the arm's/camera's shadow. I, at the same time, saw the glow around my head. 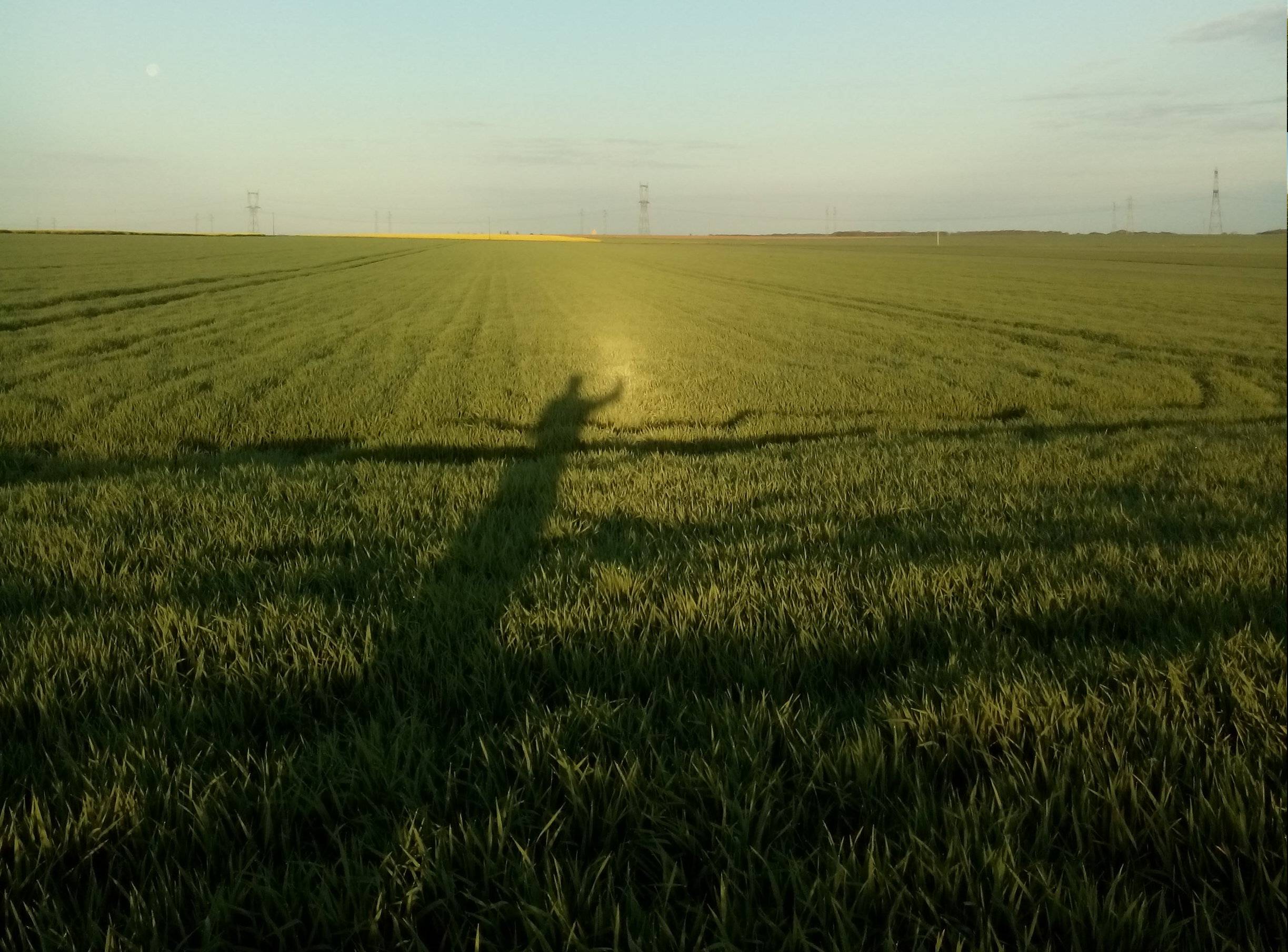 This phenomena is called Heiligenschein effect. But there are many other names for it.

This is generally seen on dew covered grass. The dew drops act like lenses, focusing sunlight on the grass leaves and illuminating them.

Read these for more information and pictures:

Watch this video showing the same: Strange halo effect around shadow at sunset

Edit: I found this article explaining Heiligenschein mechanism. This article answers questions like, "Why this is only observed around the shadow of the observer?" and "Why is the heiligenschein not green?" etc.

It is likely that, early in the morning, the observed backscatter was caused primarily by dew on the vegetation. It is true that water droplets often retroreflect. However, it is also possible to see a very similar retroreflective effect when your shadow is cast on a perfectly dry background. This is called "enhanced backscatter" or "Anderson backscatter", and is a subtle effect involving multiple scattering and interference within a disordered medium. This Ph.D thesis describes the effect in detail.

Enhanced backscatter from dry, rough backgrounds is easy to observe: look out the window of an airplane and find the shadow of the airplane on the ground. Almost always the shadow is surrounded by a halo. Similarly, when the sun is low in the sky and you're riding in a car, so that the car's shadow is cast into wheat fields or even onto the dry ground, you are very likely to see enhanced backscatter surrounding the car's shadow.

47
Why does the sky change color? Why is the sky blue during the day, red during sunrise/set and black during the night?
8
Is antumbra part of shadow darker than penumbra part of shadow?
171
Why do shadows from the sun join each other when near enough?
0
Can we consider light from the Sun during sunrise and nightfall as polarised?
9
Rainbow in cloud near Sun
3
Why does the Sun appear larger during the sunrise and sunset?
2
Does intensity of light change during refraction?
0
How does an object's shadow pattern depend on size of light source?
1
Is the shadow cast by an object hit by sunlight a sharply defined shape?