Magnetic field lines are not perfectly straight between magnetic poles

Why is fringing between magnetic poles inevitable?
The diagram given below is the incorrect representation of magnetic field lines between two poles:

There can't be such straight field lines between magnetic poles as the magnetic field can always form closed loops. However the tangential vectors through each loops point in the same direction which is illustrated in the figure. Remember that the magnetic field is a pseudo-vector. Consider a solenoid for example. 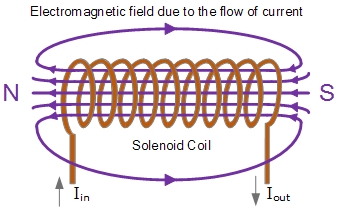 We know that the magnetic field forms closed loops around a current carrying wire. (Can you possibly say the direction of a closed loop?) More the current more will be the field line density. But that's not the reason we draw straight lines between two opposite poles of a magnet. You can only specify the direction of field at a point. That we do by drawing a tangent through the point on the loop. So if you take a region inside a solenoid, or in between the north pole and south pole, you can draw the direction of field at that point by drawing tangent on the loops at that point which will be parallel pointing in the same direction

What that has been illustrated in your picture is just the direction in which the magnetic field acts, not the field lines.

Not the answer you're looking for? Browse other questions tagged homework-and-exercises electromagnetism or ask your own question.