Calculation of support reaction in rigid body rotation and collisions

I can't understand the logic behind the calculation of torques exerted by supports in rigid body motion, especially rotation.

The calculation of angular momenta and torques requires the choice of a pivot point $O$, not necessarily the origin of frame of reference.

In some exercises the point $O$ is the point where there are the supports, which should therefore exert zero torque. Nevertheless there is variation of $L$ due to support reaction taken into account.

I'll make an example. Take the following completely inelastic collision. The ball stick to the rod and starts rotating with it. 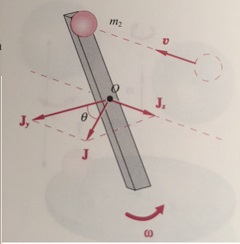 Now, there is a change in linear momentum, due to supports forces, and that's ok.

But let's take point $O$ in the center of the rod (where there is the support): then the torques of those support forces are necessarily zero, hence, from $(1)$ angular momentum should be conserved, in all directions.

Infact it is, but only its component parallel to the axis of rotation, and I don't see why, looking at $(1)$.

Reporting what is stated on textbook, for the component of $L$ perpendicular to the axis there is a variation, due to a torque acting on a time interval.

Since $O$ is the point where the forces are exerted, shouldn't the torque be always zero?

Probably I am missing something, but the logic of this seems to be that, once seen that $\vec{L}$ changes (because it does, clearly) there must be a torque exerted by the support. But this is something that $(1)$ does not tell me.

Is this the way to think in this situation? Start from the observing of the variation of $\vec{L}$ and then say that there must be a torque, even if, the forces are exerted in $O$ ($\implies $ no torque)?

The important factor here is the precise definition of the constraint at O.

From your description of what the textbook describes occurring, I take it that the rod is supported at O by a constraint which allows rotation, but only about some axis which is part of the definition of the constraint (a hinge, not a ball joint). Such a constraint can exert torques about O, just not any torques which have a component parallel to their defining axis. This is possible in the real world only because any hinge with nonzero strength must have some nonzero length along its defining axis, and thus a nonzero lever arm with which to exert torques.

Not the answer you're looking for? Browse other questions tagged angular-momentum torque rotation rigid-body-dynamics or ask your own question.