Rolling without slipping in absence of friction force

I'm confused about a rolling without slipping situation. Suppose to have a disk of radius $R$ on a floor, and exert a horizontal force at a certain distance $r$ from the center of mass.

I would like to see in which situation I obtain that the disk rolls without slipping without static friction force on the ground, that means

So actually for any force I exert horizontaly there is a point of application of the force at a distance $r$ from the center, which does not depend on the force, for which I get the rolling with no slipping with no need of friction force?

If this is correct I'm confused about the physical meaning. In this case I get $a_{cm}=\frac{F}{m}$, which is strange because the motion of the disk is not only linear but also rotational.

Compare the situation with a point that moves because of $F$: its acceleration is $\frac{F}{m}$ but the point does not rotate. Here the disk moves at $\frac{F}{m}$ and rotates too!

How can the same force $F$ produce "more motion" (forgive this expression), such as a rotation, in one case?

Everything you have derived is correct.

The reason for your perceived paradox is, I believe, a confusion between force and power. The same force can produce more power if it is being exerted at a greater velocity. When you exert a force at a radius r from the CM, the point of application of the force will accelerate more quickly than the CM, allowing the force to do extra work in the same time (more power), and causing the disc to rotate as well as translate without violating the law of conservation of energy.

If the centre of mass of the disc and the point mass moves a distance $x$ then the work done by the force is $Fx$ in both cases and yet the disc has gained some extra kinetic energy because it is rotating.

If the centre of mass of the disc moves a distance $x$ the point of application of the force has moved a distance $x+R\theta$ where $\theta$ is the angle through which the disc has rotated.

There's one thing in you question that doesn't quite add up and that is when you say exert a horizontal force at a certain distance r from the center of mass. If you are pushing a disk anywhere you push it (on the curved surface at least) is going to be a distance r from the centre of mass because the whole surface is a distance r from the centre of mass. I interpret the question to be asking at what height above the floor, h, do you want to push it so that it rolls without static friction. In that case your second equation becomes $$F\left ( h-R \right )=I_{cm}\frac{a_{cm}}{R}$$ since (h-R) is the distance perpendicular to F to the centre. Now, substituting the expression for $F=ma_{cm}$ from the first equation, and $I=\frac{1}{2}mR^{2}$ for a disk about the centre you get $$ma_{cm}\left ( h-R \right )=\frac{1}{2}mR^{2}\frac{a_{cm}}{R}$$ which is independent of F and reduces to $$h=\frac{3}{2}R$$ Having said all that Duncan Harris's answer is probably the one you were looking for. 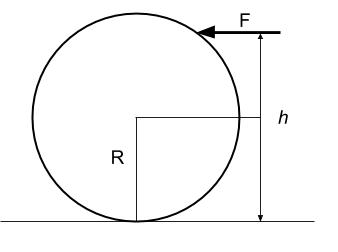 Not the answer you're looking for? Browse other questions tagged forces rotational-dynamics rotation rigid-body-dynamics or ask your own question.