What is a quasar flux ratio anomaly?

In the context of strongly lensed, multiply-imaged quasar observations, I sometimes hear about "flux ratio anomalies". What are these? Why are they important?

A massive object (such as a galaxy) along the line of sight to a distant bright source (such as a quasar) bends the light along its path. If the "lensing" object is massive enough and the geometry is right, the background object can be seen as multiple sources. For instance, here is a galaxy (central point) and four images of a single quasar: 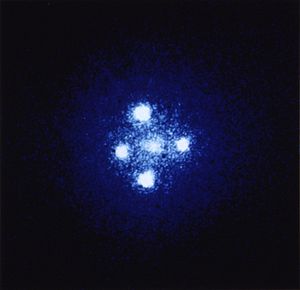 For a well-behaved, nicely symmetric lens the positions of the images yield a strong prediction for the relative flux (brightness) of each image. The images lie on a ring (with a radius called the "Einstein radius"). For example, if the top and bottom images appeared closer to the left-hand image in the picture above, the right-hand image would be relatively fainter. Systems that do not obey the predicted flux ratios are said to exhibit a flux ratio anomaly.

A flux ratio could have a number of causes:

This last possibility is of considerable interest, especially if the "substructure" perturbing the lens (or along the line of sight) is a low-mass dark matter halo ($\lesssim 10^{7}\,{\rm M}_\odot$). The existence of these halos is a fundamental prediction of the standard $\Lambda{\rm CDM}$ theory of cosmology. Conversely, such low mass halos are not expected to exist at all in $7\,{\rm keV}$ sterile neutrino warm dark matter models, the currently preferred "flavor" of warm dark matter, except perhaps for systems undergoing stripping by a more massive nearby structure. A detection, or strongly constrained non-detection, of such a low mass dark matter halo is therefore a strong test of cosmology.

Not the answer you're looking for? Browse other questions tagged general-relativity cosmology astrophysics gravitational-lensing quasars or ask your own question.

4
Signal-to-noise ratio of the difference between two signals
11
Liouville's theorem and gravitationally deflected lightpaths
5
What is the difference between a quasar and an Active Galactic Nucleus (AGN)?
2
Quasar redshift
1
Is this system somehow one toy model for something more complicated?
12
Is dark matter inside galaxies different from dark matter in intergalactic space?