There is something that I would like to confirm regarding the energy when aligning the bands of heterostructures.

There seems to be a general consensus that there is no simple rule to align two material energy bands. The most simple rules for aligning bands are the Schottky Mott rule and Anderson rule. In both of these, the vacuum level is taken as a reference when aligning bands. However, both proved to give the wrong results.

According to a review published in 2015 by Professor Tung,

When a crystal is in isolation, the positions of its internal energy bands can be referenced to the vacuum level outside.

One deduces that the Schottky-Mott rule describes the Schottky Barrier Height of the metaphysical, non-interacting MS interfaces, put together without charge or atomic relaxation

This is what I understand so far. The first statement says that the energy bands inside a crystal can only be referenced to its vacuum level if it is isolated. It is like a reference point that is used only how "far" the energy levels are, and it is valid only inside the crystal.

As you can see, here they align the vacuum levels. And they use this to justify the direction of charge transfer and rationalize depletion and accumulation layers at equilibrium.

This is what I am confused about. From what I understand the vacuum level (as well as fermi level, etc) are only internal references. This is why it is so hard to align bands between two materials. And this is also the reason as to why the location of the zero energy in bandstructure diagrams is trivial (as mentioned here) https://www.researchgate.net/post/How_does_shift_fermi_energy_to_zero_in_bandstructure_p

In band bending, however, it seems that the vacuum level is more than just an internal reference. It can be used to describe which electrons have more energy (i.e are in higher energy states). Thus, it can be used to show the direction to which electrons will flow. If the vacuum levels were only an internal reference, such description would not make sense in my opinion. After all, just because it takes less energy to "remove" an electron doesn't mean that the electron will be in a lower energy state once outside the system. Consider one has two wells. It takes less energy to take something out of well 1 than well 2. However, in this scenario, it wouldn't be correct to say that an object on top of well 1 has a lower potential than an object in top of well 2 if we removed the wells. 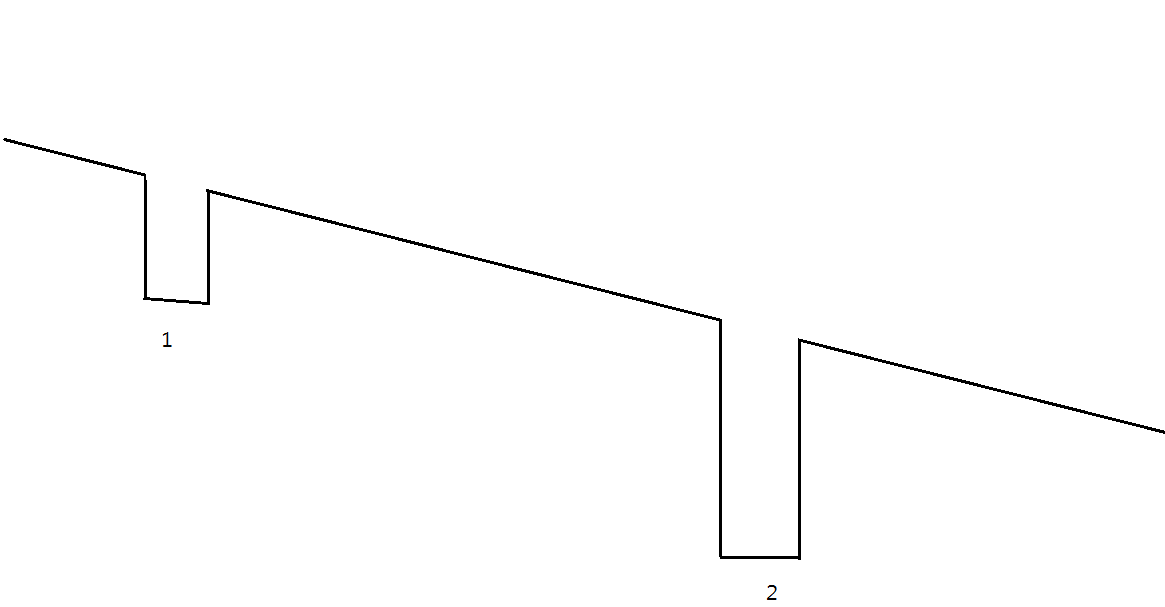 Nevertheless, the second statement from Professor Tung seems to suggest that the reason why band alignments are not simple is because there is charge transfer and atomic relaxation. Not because of the trouble in referencing vacuum levels, Fermi levels, etc. But I don't think this is the case. This is because the whole review places a significant emphasis on constructing model solids which can be used as references to predict Schottky Barriers.

So my question is: What am I misunderstanding? Are the vacuum levels and fermi levels an abolute energy scale (i.e. they tell what is the position in the hill in the drawing) or are they relative (i.e. they tell the position inside a well)? If they are relative, why can we use them to rationalize charge transfer? If they are not, why is is it so difficult to align bands in heterostructures? (other reasons than the fact that band alignments have to take into consideration things like atomic structure, vacancies, and defects)

I have taught myself and several other people how to understand band diagrams properly and I find that universally (myself included) there is a certain need to "unlearn" things that you may have been mistaught in classes or misunderstood. Major problems occur if one has taken a solid-state physics course which only studied band structure in infinite homogeneous perfect crystals. The intuitions one gains about electron energies in these courses can break down completely once inhomogeneities and interfaces are introduced.

The most important things I had to learn to fully understand band diagrams and band bending are the following facts:

Band bending at equilibrium is basically a consequence of two phenomena, and Tung only addresses the first point (the latter is a separate concern):

Not the answer you're looking for? Browse other questions tagged solid-state-physics electronic-band-theory or ask your own question.

2
A few questions about the Fermi Level/Energy
2
Schottky Barrier - Why energy band levels at interface are assumed to remain the same that bulk
1
Problem with energy bands
2
The concept of Fermi level
0
Band gap vs QM energy level gap between electron orbitals
0
Fermi level in a solid
1
How to read some certain band diagrams?