What role does the center of mass play in this situation? (electric potential)

Four masses $10\ \mathrm{g}$ each are tied together by $10\ \mathrm{cm}$ strings to make a square as shown. Two of the masses carry a charge of $2\ \mathrm{\mu C}$. The string between the two charged masses is cut and the system begins to move. What is the maximum speed of the masses in $\mathrm{m/s}$? Do not consider gravity or friction. You can imagine the masses to be on a horizontal frictionless table. 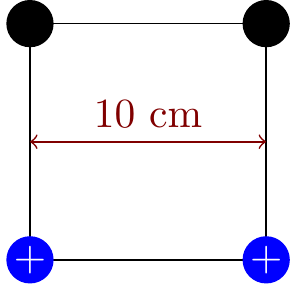 As written with the bottom two being charged, there is no motion because they are still tied together. Presumably you want the left two to be charged so they can move away from each other. The CM does not move because every force in the system is balanced by an opposite force-there is no net force on the set of masses. This observation is useful because it allows you to link the motion in the two axes. Right at the moment the strings are cut, the left masses are repelling each other and accelerating vertically away from each other. As they start to move, they will pull the right masses to the left and be pulled themselves to the right. We can relate the left/right motion to the vertical motion by the fact that the CM is stationary.

Not the answer you're looking for? Browse other questions tagged homework-and-exercises newtonian-mechanics electrostatics potential or ask your own question.

6
Finding the acceleration of a cart rolling on a table
0
Two masses connected by a string in horizontal frictionless table
5
Can a box on a frictionless rotating table rotate?