How is time evolution done in numerical GR?

Naively, I would have guessed that GR simulations, like the one used for the LIGO experiment, are done by finding the coefficients $g_{\mu\nu}$ at a fixed time coordinate $t = t_0$, then numerically evolving them forward a timestep. But I'm not sure if this makes sense, because inside the event horizon, $r$ is the timelike coordinate, not $t$.

Is this a problem, and if so, how do we get around it? More generally, how can one reliably define "initial conditions" or "time evolution" if the time coordinate can vary?

These things can be hard to visualise. To gain a picture of the global structure of spacetime, it is often useful to use a Penrose diagram. The Penrose diagram for Schwarzschild spacetime is this$^1$: 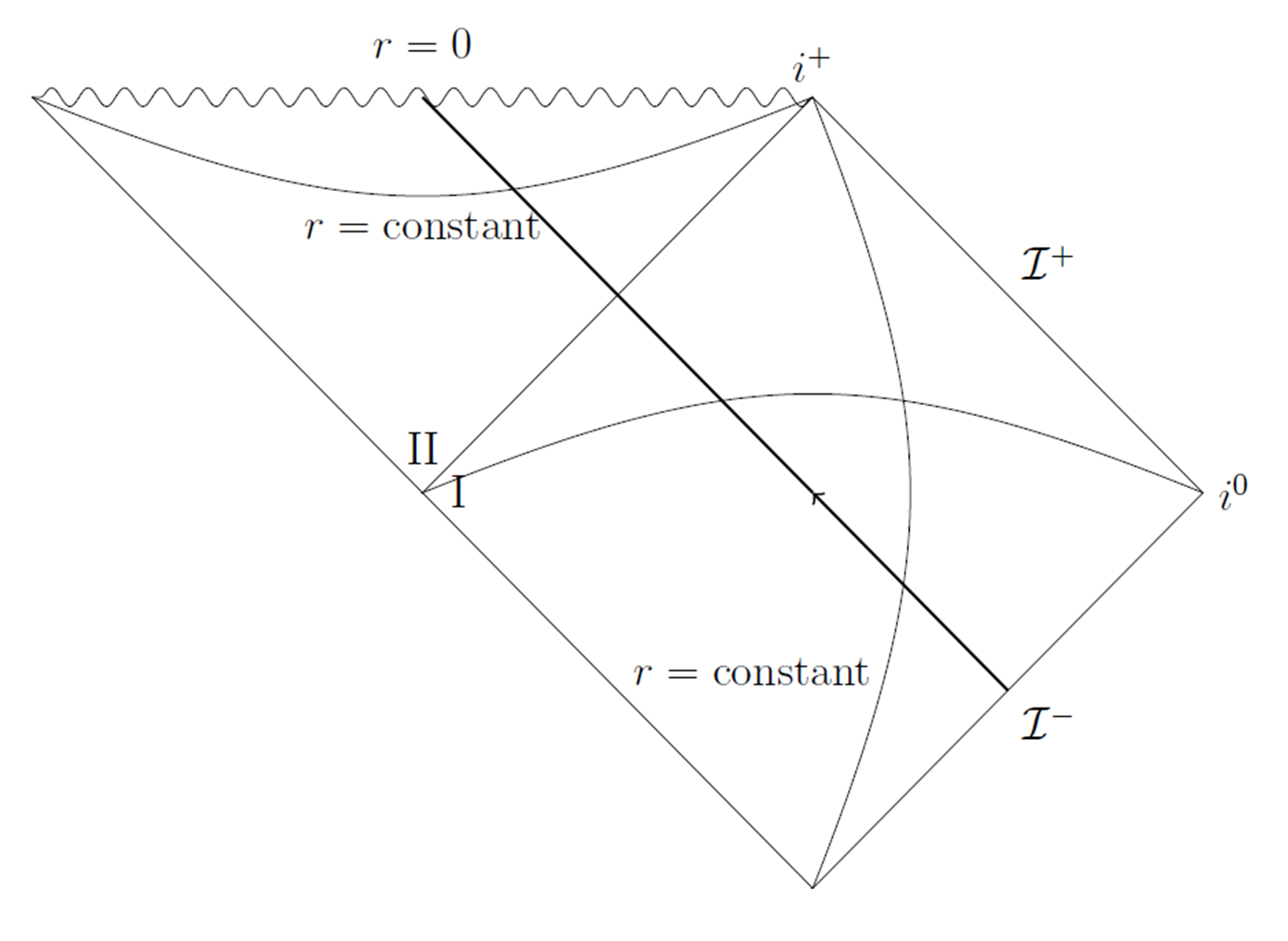 This diagram is a little confusing at first, and it would take too long to explain all the details. However, the basic picture you should have in your mind is that 'time' runs vertically on this diagram, whilst 'space' runs horizontally. The square region on the right (I) corresponds to the black hole exterior, whilst the triangular region at the top (II) corresponds to the black hole interior. The diagonal line dividing them is the event horizon. Whilst the Schwarzschild coordinate $t$ points (roughly speaking) vertically in region I and horizontally in region II, I can certainly put down coordinates on this diagram such that one of them is timelike everywhere. A simple rectangular coordinate system would do the job here.

Remember, a spacetime is a geometric entity which exists without reference to any particular coordinate system. Instead of getting bogged down in the peculiarities of one coordinate system or another, it's better ask about the global structure of the spacetime, and whether there is a sensible notion of 'time direction' that one can unambiguously assign to it.

$^1$Image taken from the lecture notes on Black Holes by Harvey Reall, http://www.damtp.cam.ac.uk/user/hsr1000/teaching.html.

This being said, the initial value problem in general relativity amounts to far more than just finding an unambiguous time direction! In order to be able to numerically simulate time-evolution, we need for our spacetime to be not just time-orientable but also globally hyperbolic. In essence, this means that we can slice up our spacetime into a series of spatial hypersurfaces $\Sigma_t$ labelled by some coordinate $t$ (this is not the Schwarzschild $t$) such that each hypersurface lies to the future of the next. In addition, each of these hypersurfaces needs to be a Cauchy surface, which means that initial data on any of the $\Sigma_t$ is enough to determine the behaviour of the metric for all future times.

Note that regions I and II of the above diagram (the black hole interior and exterior) are together not globally hyperbolic! This is because the behaviour of the metric in the interior of the black hole is not determined by the behaviour of the metric outside of it – this is merely the statement that we don't know what's going on behind the event horizon. Attaching the (unphysical) regions III and IV to the spacetime yields the Kruskal spacetime, which is globally hyperbolic.

The distillation of this is that the conditions on our spacetime required for the initial value problem to be well-posed are not straightforward!

Even if we're working with a time-orientable, globally hyperbolic spacetime, it's still not obvious what kind of data we need to specify on our initial hypersurface $\Sigma_0$ in order for a solution to exist and be unique. The metric alone ought to be insufficient for a unique solution, since the Einstein equations are second order. Specifying a time derivative of the metric on our initial hypersurface corresponds mathematically to specifying the extrinsic curvature tensor on $\Sigma_0$.

Furthermore, the Einstein equation places constraints (known as the Hamiltonian and momentum constraints) on the metric and extrinsic curvature we are allowed to specify – that is to say, it is not possible to specify both an arbitrary metric and an arbitrary extrinsic curvature tensor on $\Sigma_0$. Once we have specified initial data obeying these constraints, a theorem due to Choquet-Bruhat and Geroch guarantees that the time-evolution of the metric exists and is unique.

Sorry to disappoint you, but my answer is less romantic than you might expect: There is no varying time coordinate which could change the situation.

In contrast, the clock of the infalling particle B will provide a time coordinate for the moment when particle B touches the event horizon. But the time coordinates of B at this moment correspond to no coordinate time of any outside observer. All outside observers agree that B will never reach the event horizon. The region "II" in the Penrose diagram above is happening after the end of our time, for this reason its time concept is rather meaningless.

Not the answer you're looking for? Browse other questions tagged general-relativity metric-tensor computational-physics time-evolution or ask your own question.

2
Is the orbit in Schwarzshild metric a path with maximal proper time?
0
Gravitational Time Dilation and Schwarzschild Coordinates
2
Numerical relativity in causally pathological spacetimes
22
How do we know the Schwarzschild solution contains an object of mass $M$?
0
Are the space and time axes of Schwarzschild metric uncurved?
2
Can you go back and forth through time when inside a black hole?