Finding the force exerted by a mass at different contact points

Okay so I've been doing a math assignment on torque which has to have real-world applications so I've gone off on a massive tangent trying to incorporate physics principles and trying to get them as correct as possible (even though whether the actual physics is correct or not is irrelevant)... But now I've become so obsessed with the physics that I am just really curious to understand how it all really works.

In the image below, what you can see is a snippet of a diagram I've been working on. The mass has been lifted slightly (on some angle, theta) by a sign post due to a force being applied (out of view) at the top of the post (net torque in anticlockwise direction) and it's pivoting off an adjacent object's corner.

The mass being lifted is, obviously, also exerting some kind of force. What I'm trying to figure out is how big of a force. I know that to cause torque, I must find the component acting orthogonal to the post and all the like - but what I'm first trying to understand is this: How is the weight of the mass distributed? At first I saw there were two contact points so, assuming uniform mass, I thought it would probably be accurate enough to say that the weight is distributed evenly over the two contact points. And of course, this would probably be true if the mass was horizontal with two contact points at equal distances from the centre of mass. But what I'm worried about is the angle, theta, to which the mass is being lifted. Surely it has some effect on the centre of mass and thus weight distribution. It looks as though now the top right corner of the mass would be exerting some kind of force as well (perhaps I could conceptualise this situation in terms of torque? i.e. with right bottom corner of the mass as pivot point... not sure how I would go about it exactly though. I've just seen it done before with simple situations where torque is used theoretically to find unknown forces)

Anyways if anyone could shed some light on how to calculate the force exerted by the lower left corner of the mass on the post in terms of M and theta, that would be amazing, thank you! 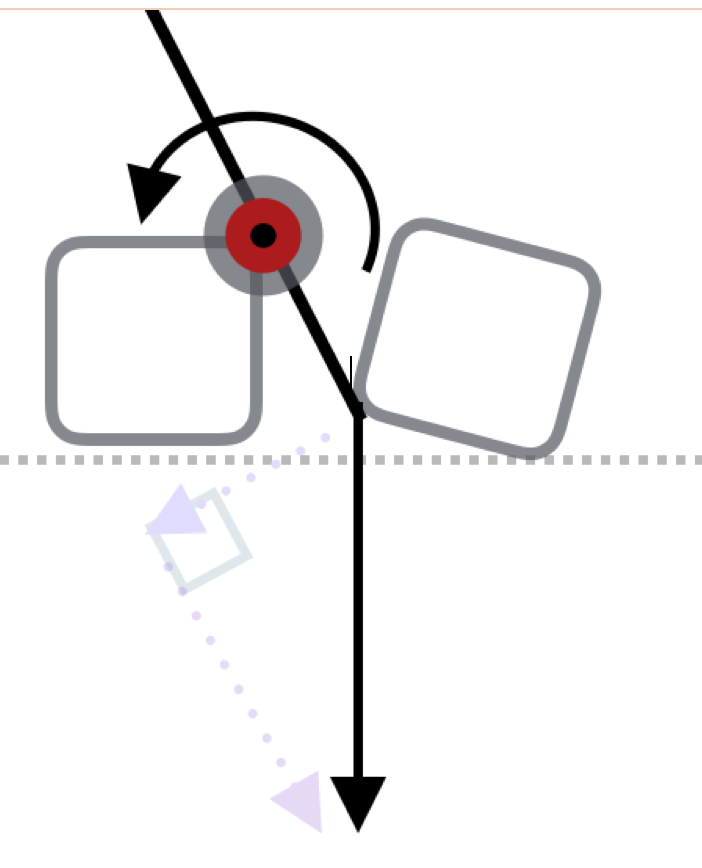 Here is the beginning of a free body diagram. 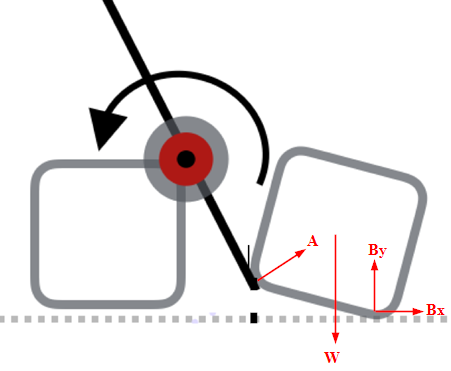 Each contact force $A$ and $B_y$ acts on the contact normal direction. For $B_y$ this is vertical and for $A$ this is perpendicular to the lever. The weight $W=m g$ acts on center of mass. Now you have to add friction to the contacts as shown with force $B_x$. Here friction is shown with a positive value acting to the right, although we expect for the actual friction to oppose $A$ somewhat and so the result should be a negative value for $B_x$. It doesn't matter as the equations end up being the same.

You find the solution as if there is infinite friction available by doing sum of forces and sum of moments equals zero. The point you add up the torques does not matter. You have three equations (two forces + one torque) and three unknowns, $A$, $B_x$ and $B_y$. The details are just trigonometry in order to get the force directions and moment arms correctly.

The result would be a horizontal acceleration since the forces would not add up to zero anymore.

Not the answer you're looking for? Browse other questions tagged newtonian-mechanics forces mass rotational-dynamics torque or ask your own question.

2
Torque Required For a Motor to Move an Object on Wheels?
2
How is normal force distributed along the surface of contact?
0
Torque caused about point of contact by a force passing through CoM of a sphere on a frictionless surface
1
Finding the state space representation of a dynamic model with the force and angle as control inputs vector
3
Why does the friction force on a smoothly rolling wheel cause the centre of mass to accelerate?
1
Force required for Angular Accleration
4
When the Center of Mass and Center of gravity does Not Coincide