We were recently asked to solve a question in class which goes as follows:

In a modified Young's double slit experiment, a monochromatic uniform and parallel light beam of wavelength $6000$ angstrom and intensity $(10/\pi)\,\mathrm{W\,m^{-2}}$ is incident normally on two circular apertures A and B of radii $10^{-3}\,\mathrm m\;$ and $2\times10^{-3}\,\mathrm m\;$ respectively. A perfectly transparent film of thickness $2000$ angstrom and refractive index $1.5$ for the given wavelength of light, is placed in front of aperture A as shown in the figure. Calculate the power received at the focal spot F of the lens. The lens is placed symmetrically with respect to the apertures. Assume that $10\%$ of the power received by each aperture goes in the original direction and is brought to the focal spot.

But this results in an answer of $7\times10^{-6}\,\text W$, which implies that an extra power of 2 microwatts is appearing from thin air. So, is the answer and the approach correct? If the answer is correct, then where does the extra power come from? If not, what is the correct approach? Also, then why is the formula for resultant intensity invalid?

Note: I have written intensity everywhere to mean irradiation, because for now, we call it intensity where we learn about it.

The average intensity of the whole fringe system must be $1+4=5\;\mu$W.

Your chosen position is one which is nearer a maximum than a minimum. 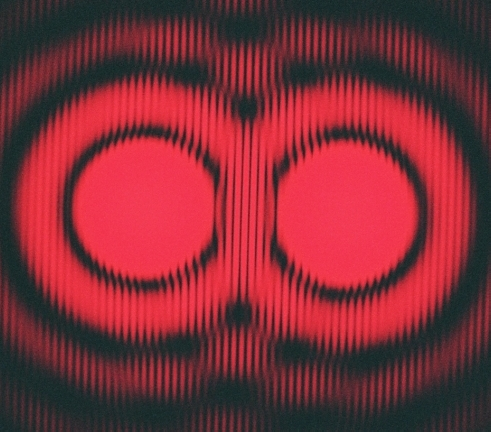 Not the answer you're looking for? Browse other questions tagged optics waves electromagnetic-radiation energy-conservation interference or ask your own question.

1
Light focusing on long distances
3
Focusing white LED light into a spot as small as possible
0
Calculating Laser Focal Power & Focused Beam Waist
3
Deriving the non-paraxial form of Rayleigh criterion
2
Rayleigh criterion: angular or spatial resolution?
2
Which of these concave lenses has a greater power
0
Interference pattern due to a thin prism and a lens