The two causes for the factor 2 in Coriolis effect

While reading this document on Coriolis effect http://empslocal.ex.ac.uk/people/staff/gv219/classics.d/Persson98.pdf, I saw the followig sentence

Two kinematic effects each contribute half of the Coriolis acceleration: relative velocity and the turning of the frame of reference.

And this is the reason why Coriolis term has that factor $2$. Unfortunately it does not specify anything about this two causes. Does anyone have some further explanation for how "relative velocity" and "turning of the frame" actually give rise to the Coriolis term?

Here is one$^1$ way of looking at it via a velocity-dependent potential. The Coriolis potential is

$^1$ Alternatively, an elementary derivation of the Coriolis acceleration is given in this Phys.SE post, where the factor $\color{red}{2}$ appears from a binomial coefficient $\begin{pmatrix}2 \\1 \end{pmatrix}=\color{red}{2}$ in a cross-term.

Take a free particle moving on a plane in polar coordinates

The velocity is found from the chain rule, with clear separation for radial and tangential components:

The acceleration is found again by differentiation

Now the first part $(-r \dot{\theta}^2, \dot{r} \dot{\theta} )$ contains the centrifugal acceleration in the radial direction and the change in orientation of the tangential acceleration which is the other half of the coriolis effect.

But I find all this confusing. I'd rather look at a picture: 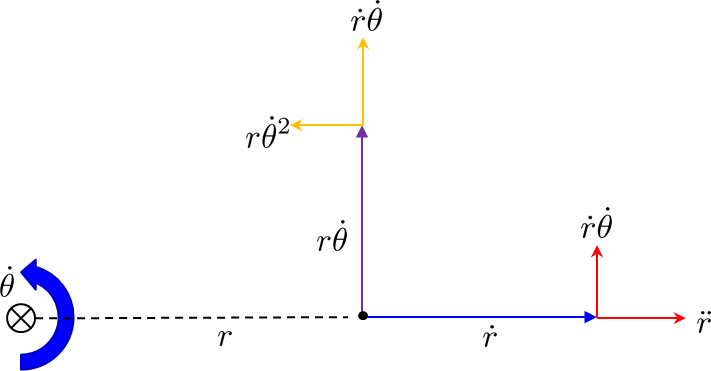 The changes in the velocity vector in radial coordinates (where the center of rotation is in the -x direction. The two $\dot{r} \dot{\theta}$ terms in the coriolis term are from a) turning of $\dot{r}$ and b) extension of $r \dot{\theta}$.

The other answers are fantastic and the math is exactly correct, but this answer provides some additional intuition behind the two "separate" causes. See the final paragraph for motivation for this additional answer.

Imagine a train moving directly north at a constant velocity relative to the ground while in the northern hemisphere. As it travels further north, the eastward velocity of the Earth's surface decreases. The ground, therefore, must exert a western force (countering the eastern Coriolis Force) on the train to slow it down to give it a east/west velocity of zero relative to the ground. If we derive the equation for this force, this is exactly 1/2 of the Coriolis effect. We might then, mistakenly reason that all other forces involved are radial (to make it easy, assume the Earth is a perfect sphere). This reasoning is incorrect; consider the picture below.

In this picture, we view the Earth from above the North Pole. Our train (the red dot) is moving northwards. Velocities are in red, and forces are in blue. 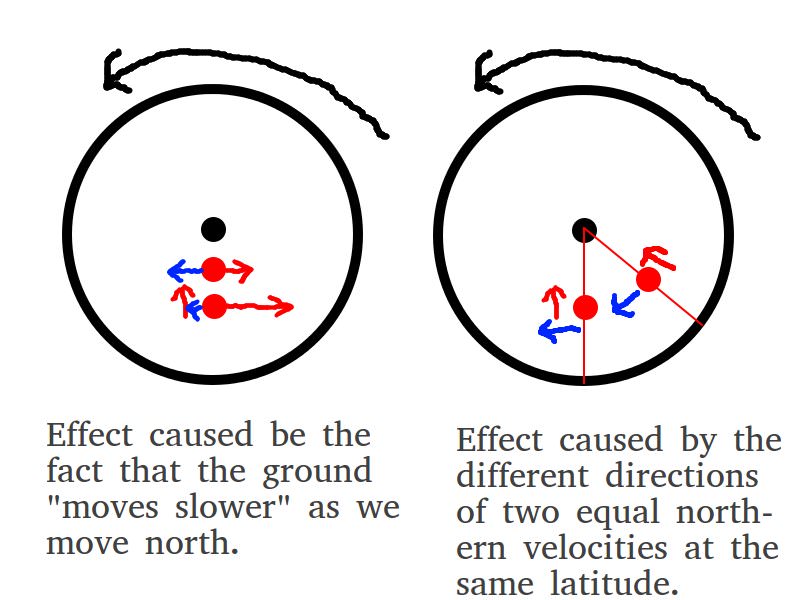 The left image depicts the effect described above. As the train moves north, the ground goes "slower", so it must exert a westward "force" on the train. This accounts for exactly half of the Coriolis force. (To clarify, the Coriolis Force is directed to the east, and the ground is exerting an opposite westward force on the train).

The right image depicts the other effect in play. Consider two trains moving north at the same speeds and same latitudes, but different longitudes (one is directly east of the other). Clearly, the directions of the train velocities (the two red arrows) are different in 3-D space. The force exerted on the ground by the train cannot be purely radial to transform the velocity of the western train into the velocity of the eastern train (there is clearly a western component of this force). Additionally, the effect is not accounted for in the reasoning above or in the image on the left, since there is no northward displacement (they are both moving north, but are at the same latitude).

Hopefully this makes it more clear for those who, like me, could follow the math but not the intuition behind the other answers.

Motivation for the additional answer: The two other answers are fantastic and the math is right, but after reading them numerous times, I was still lacking intuition. Furthermore, I had derived it from first principles in a very different way than the other answers, gotten 1/2 of the answer, and was unable to see where my logic went wrong (it turns out I was accounting for the "ground moves slower as we go north" effect, but not the other effect). The questioner here had the exact same problem, but had his or her question marked as a duplicate, so I was unable to answer there. Like the answers here, the answer there provides a fantastic mathematical derivation but does not provide an intuitive breakdown of the two "separate" factors.

Not the answer you're looking for? Browse other questions tagged newtonian-mechanics reference-frames acceleration inertial-frames coriolis-effect or ask your own question.

1
Where does the '2' Factor come from in the Coriolis Force?
2
Acceleration in plane polar coordinates
24
Derivation of the centrifugal and coriolis force
0
Intuition for formula of tangential component of acceleration in general curvillinear motion
-1
Direction of velocity in curvilinear motion
0
In this Lagrangian, what does the last term mean?

1
Coriolis force: why is pole-to-equator air flow eastly?
50
Is there an underlying physical reason why the Coriolis force is similar to the magnetic component of the Lorentz force?
0
Physical interpretation of Coriolis terms in acceleration
0
Effect of Coriolis force
10
Coriolis force and conservation of angular momentum
2
Deviation of free falling objects (Coriolis effect) using conservation of angular momentum
1
Real force analogue names for the coriolis and azimuthal fictitious forces
0
Taylor's Classical Mechanics - Confusion About Reference Frame
14
Can a bullet travel all the way around a centrifuge?