3.Spiral arms are regions of stars that extend from the center of spiral and barred spiral galaxies. These long, thin regions resemble a spiral and thus give spiral galaxies their name. Naturally, different classifications of spiral galaxies have distinct arm-structures. Sc and SBc galaxies, for instance, have very "loose" arms, whereas Sa and SBa galaxies have tightly wrapped arms (with reference to the Hubble sequence). Either way, spiral arms contain a great many young, blue stars (due to the high mass density and the high rate of star formation), which make the arms so remarkable. Source. 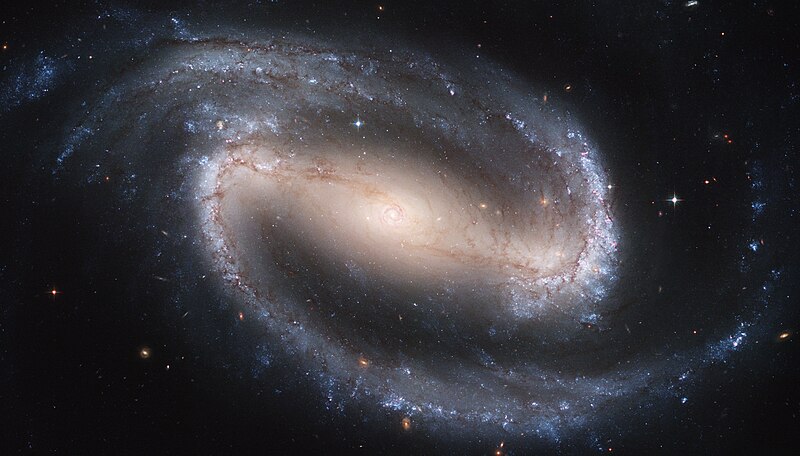 Yes most galaxies are spiral,elliptical and bared. The reason for this is the same reason planets orbit stars; gravity. Before the universe had "structured" galaxies masses of gas and dust could just clump together and probably created a massive star with a short lifetime, after the stars life it is likely that it would turn into a black hole. (A super massive black hole to be precise) which then pulls in a load of other gas and dust along with a few other elements it spat out when it turned supernova. These clumps slowly formed bigger clumps until the same thing happened on a smaller scale and stars with longer life times were produced. Of course these are stil being pulled towards the super massive black hole and they begin to travel faster and faster. Some of these stars would be sucked straight to the middle of the black hole while others would just escape it and begin to orbit it. This is how they get their shape. As for the arms instead of the stars all being even distances apart some would be heavier and pull themselves towards each other to form clumps among them.

Adding to the answer of the question 3 (How did arms of the spiral galaxies form?) one of the theories suggest an encounter between galaxies. This simulation I found in other answer "shows the influence of a nearby galaxy causing the imbalance which triggers arm formation" and could be interesting to see.

Not the answer you're looking for? Browse other questions tagged astrophysics galaxies or ask your own question.

0
Why do galaxies over time become more refined?
55
Why the galaxies form 2D planes (or spiral-like) instead of 3D balls (or spherical-like)?
23
How do spiral arms form?
1
Is there a binary black hole system in the middle of the galaxy?
0
How can a galaxy not be disk shaped

19
How can a spiral galaxy exist?
23
How do spiral arms form?
55
Why the galaxies form 2D planes (or spiral-like) instead of 3D balls (or spherical-like)?
0
Synthesising types of galaxies using various stellar spectra
4
Tidal tails of galaxies after collision
0
Gravitation and the structure of galaxies
6
How Much Do Spiral Arms Affect Their Galaxies' Rotation Curves?