I was reading the AQA A Level Physics revision guide by Jim Bretihaupt, and in the Materials chapter in the section to do with plastic deformation, it says:

Beyond the ultimate tensile stress, the wire loses its strength, extends and becomes narrower at its weakest point. Increase of tensile stress occurs due to the reduced area of cross section at this point, until the wire breaks at point B.

This graph illustrates what this is all about: 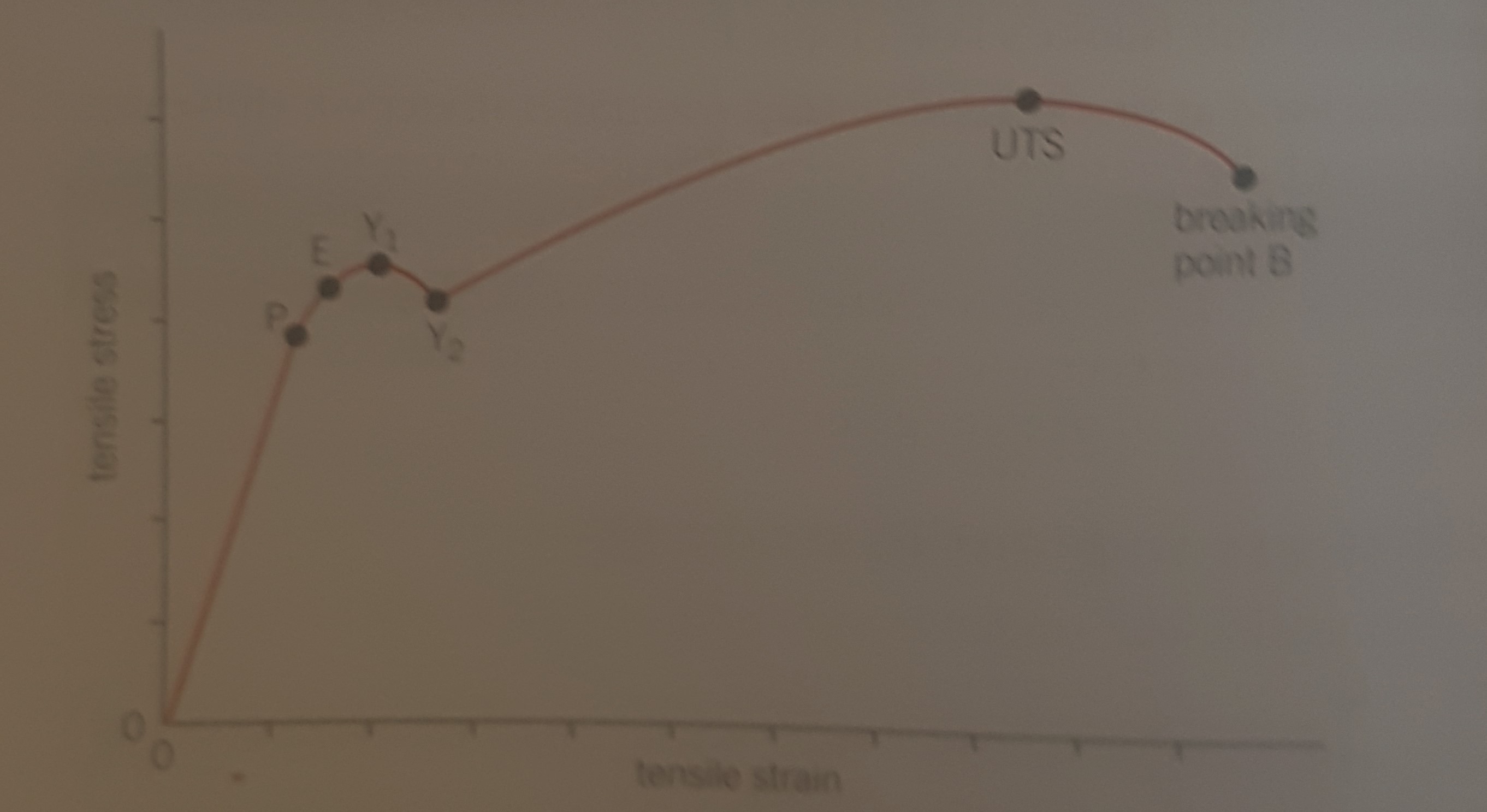 At least a part of this comes from understanding where the stress-strain curve comes from. Normally from a physics background we think of applying a force to a sample and seeing how it responds. Instead, experimental results like what you show are done differently in materials science - the sample is mounted in the testing machine (Instron for example), and the strain (distance between the jaws holding the test piece) is linearly increased at some rate, and the resulting force across the test piece is measured. So, you need to warp your thinking from physics to materials science. Now, In the elastic regime, this difference really doesn't mean much - you pull it and it extends, or you extend and it pulls back on you. However, once plastic deformation starts things are different.

So, what is plastic deformation? At the simplest, of course, it means the test piece isn't going to be the same length/shape as it was before hand. This is a somewhat slippery slope, because the engineering definition of the start of the plastic regime is actually that a small, measurable deformation has occurred (hint to mechanical engineers - if you really want no change stay well away from the elastic 'limit').

How does the material plastically deform? That might take several books to describe, but I will focus on one mechanism - dislocation generation and motion. At some applied stress various mechanisms in crystals come in to play to generate dislocations. These dislocations can move, and their motion results in plastic deformation. The softening from Y1 to Y2 is where these dislocations are moving. At Y2, however, the dislocations start interacting with each other, so they no longer move as easily. Thus, more elongation requires more stress than it did before, so one heads uphill toward the ultimate tensile strength.

At the UTS, well, things go pretty much all wrong. The dislocation tangles break up, dislocation sources pump out lots more dislocations, shear bands rapidly form, and the material more or less falls apart. Yes, the cross section has (likely) been thinning all along, but now it all goes non-linear and poof, it breaks.

One might think this is really bad for engineering materials - why would you want any material to have a stress-strain curve as you have shown? One thing to consider is that the material has absorbed a great deal of energy - You want the materials making up the engine compartment of your car to behave as shown - in a crash they will deform and absorb a tremendous amount of energy before they fail. That means that you don't have to absorb much energy, which is a good thing.

Not the answer you're looking for? Browse other questions tagged homework-and-exercises material-science stress-strain or ask your own question.

0
Why don't we take into account the width contraction of the wire in calculating the stress strain relationship for a stretched wire?
1
Why are stress forces considered as acting on a cross-sectional area through a solid?
3
How does stress change through a bar that sharply increases in diameter?
1
Localization of stress in tensile test specimen
2
What is the difference of engineering and true stress?
0
Strain on a steel wire explanation
1
Why don't we consider the reduce cross-sectional area while calculating stress in a metallic wire?
0
Why is Maximum Roll Pressure Not Always at the Plastic-Elastic Boundary?