Lifting and putting down a weight

A man in a gym lifts a weight and then puts it down where it was before.

1) What can be say about the work done by the man to the weight?

2) Can it be equal in absolute value to the work made by the gravitational force (that is $0$)?

3) Is it actually equal to the amount of physical energy spent by the man for this physical performance?

4) Can we quantify this energy given the mass and the height?

5) Is the energy spent by the man really independent on the time used for this action?

1) What can be say about the work done by the man to the weight?

Unlike gravity, the force exerted by the man is in general not constant, does not depend only on position of the body (you may apply different force on the weight at the same height $h$ on the way up vs. on the way down), and is not conservative (does not arise from a potential). When the force is conservative, like gravity, you can conclude that its work is $0$ when the body returns to the initial place. This is because the work of such a force measures the change in potential energy, like $mgh$ for gravity. But the force exerted by the man doesn't arise from any useful notion of potential energy and you cannot conclude that its work equals $0$ just because the weight returns to the same place.

2) Can it be equal in absolute value to the work made by the gravitational force (that is $0$)?

Despite what I wrote above, we can conclude that the work done by the man is $0$, but only if the weight, on return to its initial location, has the same speed as in the beginning (that is, $0$). This is true for the following reason. The work of the resultant force acting on the body (the sum of all forces) always equals the change in kinetic energy. If the kinetic energy didn't change, then the total work is $0$. The total work is the sum of the work by gravity and by the man. The work by gravity is $0$ for a different reason, as explained above (gravity is conservative). So the work by the man must be $0$ too.

So if the man carefully brings the weight to the ground, letting it touch the ground gently and settle, the work will be zero. If he throws the weight down or lets it fall, or moves it violently, the work done by the man will not be $0$. It will be equal to the weight's kinetic energy, $mv^2/2$, at the moment of impact with the ground.

3) Is it actually equal to the amount of physical energy spent by the man for this physical performance?

No. Our bodies are built from soft tissues, and even the strong parts, the bones, are connected by tissues that cannot withstand large forces passively and still maintain the amount of control we desire. When we lift the weight, we generate the force needed to counteract gravity by contracting and relaxing many fibers in our muscles constantly. If this contracting/relaxing was purely mechanical, it might do just a little work (not $0$ because some kinetic energy will be lost to friction, but almost). But it's not, it's chemical and requires spending chemical energy on contracting of which only a part is given back when relaxing.

4) Can we quantify this energy given the mass and the height?

No, that depends a lot on muscle effectiveness, particular movements, etc. Biologists attempt to measure those things - for example, there are articles on the effectiveness of running. But it;'s hard.

5) Is the energy spent by the man really independent on the time used for this action?

Not in general, no.

1&2) Let's suppose there are only two forces in play: the one exerted by the man, and weight.

The sum of works done on the body equals the variation of kinetic energy (this is a theorem of mechanics; I fail to find its English name). Since the body has no velocity at the start and at the end, the sum of works is zero.

3&4&5) Biological energy consumed is an entirely different problem. You can see this clearly since the "mechanical" work done by the man is zero, although with a heavy weight this is a performance!

Our muscles use so-called "molecular motors". I'm not a specialist of this field, but I know that these have the property of constantly "slipping", they cannot be in a "locked" state. As a consequence, they need power to sustain a force even if they don't move (at the macroscopic scale): this is common knowledge that you get exhausted by simply holding a big weight, whereas in physics words there is no mechanical work done (but the consumed energy ends up heating the muscles; the 1st law of thermodynamics is not violated!).

There's no law giving "biological energy" consumed as a function of force applied that I know of. Maybe are there some empirical models.

The energy spent is of course dependent on the time used: if the movement is really slow, the man holds the weight for a very long time, and this is very exhausting!

I recently answered a similar question. It was about the work done by a man while carriying a 50Kg suitcase over his head, traveling an horizontal distance of 15m.

The answer I gave about the work done was:

If your height is, lets say, 1.80m, then the total mechanical work would be the work done while lifting the suitcase, plus some “extra” work due to the inefficiencies of the human body machinery internals.

John lifts 10 50Kg potato sacks from the ground to the platform of a truck, which is at a height of 1.5m.

He drives to the destination, and afterwards John downloads the 10 potato sacks, very carefully and gently putting them on the ground … he doesn’t want to spoil the potatos.

But John, who likes mechanic artifacts, quickly uses a piece of paper and pencil and draws this invention: 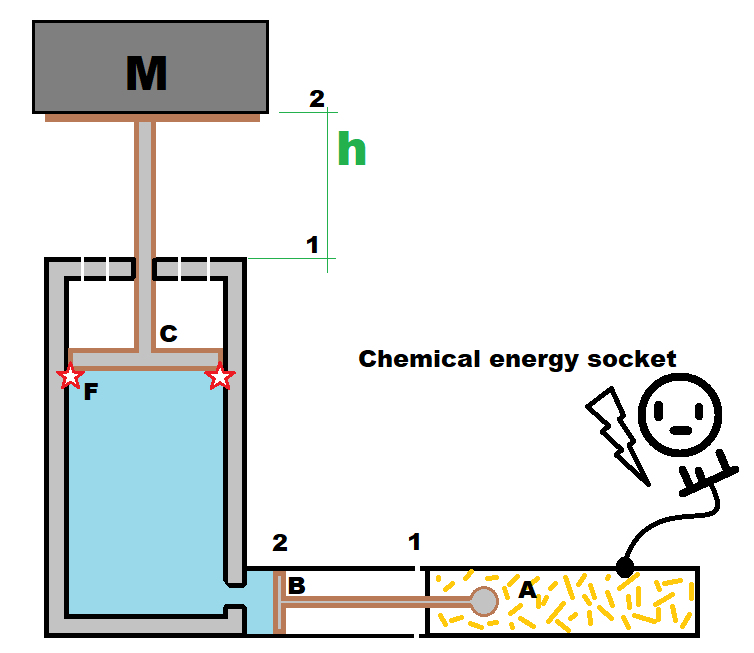 John’s reasonig is the following:

The machine is the mechanical equivalent of my body workings.

When I lifted the mass, the machine did a negative mechanical work, which was more or less mgh plus some “extra” work also to displace upwards the gravity center of the hydraulic fluid mass inside the cylinder.

What do you think?

P.D. To avoid any further arguments with his boss, John decided to just drop the potato sacks to the ground in the future, because in that scenario was clearer that he did not any mechanical work during the setting down phase.

Lets not consider the extra energy consumed by biological reactions in a human body. Imagin a robot is doing this. The total work done on the weight is zero(if problem is simplified to constant velosity and not existing friction) because W robot=0 and W mg=0 in one complete receprocation. BUT the energy spent by the robot is ∫|f.dx| . i.e in both raising and lowering ways the positive amount of work is integrated and equals to total energy consumed by the robot.

Not the answer you're looking for? Browse other questions tagged energy everyday-life work biophysics biology or ask your own question.

0
How come weight doesn't affect the rebound height on a net?
6
Feynman Lectures: Why a non-reversible weight lifting machine cannot lift higher that a reversible one?
4
From where does gravity get its energy to do work upon an object?
5
Change of kinetic energy of a rock lifted by a force greater than its weight
4
Calculating amount of work done in gym workouts
2
Work done in lifting a mass vs work done by mass as it falls to starting position