Why do magnetic field lines converge where the strength is strongest?

In most of the sites, they just say that "to determine the strength of the magnetic field, one must look at how many lines are present at a particular location." But my question is why? Why is this true? I am not able to get the intuition behind this.

And another question: The diagrams of magnetic fields are basically some curves, which are closer nearer the poles and away in the centre of the magnet. However, in physical space, is there any distance between these "lines"? I know that these lines are just a visualisation, but even then, magnetic field occupies the whole space(not physically, of course), but how just by looking at the diagram one can determine the strength of the field?

The lines are indeed visualisations to represent a vector field.
At each point in space there is a magnetic field strength and a direction for that field.
The left hand diagram is such a representation for the magnetic field around a current carrying conductor with the current coming out of the screen.

If it was correctly drawn then the length of each of the arrows should be inversely proportional to the distance from the centre.
So this diagram gives you information about magnitude and direction.

The representation that you are perhaps more familiar with is thet in the right when the tangent to a field at a point gives the direction of the magnetic field line.
To illustrate the fact that the field is stronger near the conductor the concentric circles are drawn closer to one another.
So perhaps the second diagram does not have as much information on it as the first but it is significantly easier to draw.

However there diagrams are incomplete in that the magnetic fields are actually three dimensional and then the drawing of such diagrams becomes even more difficult.

Historically the magnetic flux density was the number of field lines per unit area and that is were the term flux (= flow) comes from with magnetic flux being the total number of lines.
You will still find lots of textbooks which are in esu, emu, cgs and Gaussian units from a time when there were also magnetic poles which followed an inverse square law just like Coulomb's law for electric charges.

So going back to your queries and the statement you made that they the magnetic field lines are visualisations and so you have some degree of artic licence with them provided you follow the simple properties:

Perhaps the most convincing / intuitive answer comes from looking at some basic vector math.

Field is given as "flux", which we graphically equate with "lines per unit area".

So let's take a simple 2D diagram with diverging lines: 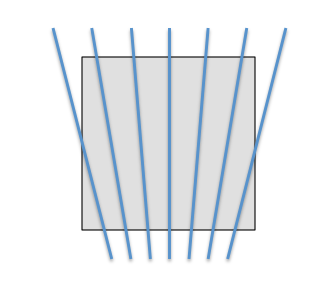 The gradient here is in the up-down direction. This tells us that the field is stronger in the lower part - where the field lines are closer together.

I don't know if that helps you tie the two concepts together...

This property is a consequence of the divergence of the Magnetic field being being 0.

The important thing to note is you can start out by trying to draw as many fixed number of field lines on paper as you choose; the argument remains the same.

Consider any two “adjacent” field lines, both running from a region of high flux density to a region of low flux density. Consider a Gaussian box (admittedly I’m visualizing in 2 dimensions) whose sides are along the two adjacent field lines. One end of the pillbox is perpendicular to the field lines in the high flux density zone; the other end similarly perpendicular to the field lines, but this time, in the low flux density zone. The divergence of the magnetic field being 0, the flux through the narrow high flux area should equal the flux through the broad low flux area. This necessitates the relative lowering of field strength in the low flux region.

P.S: Because the curl of the field is 0 when no currents are flowing (as is the case here), the field strength along two adjacent lines would have to be almost similar, on the perpendicular plane. (Construct a suitable loop to see why this should be). This fact ensures that there is no arbitrary variation in the field strength on the perpendicular plane, and thus the argument of the previous paragraph works well.

Not the answer you're looking for? Browse other questions tagged magnetic-fields gauss-law vector-fields or ask your own question.