Have a look at an announcement from LIGO where they describe the experiment. 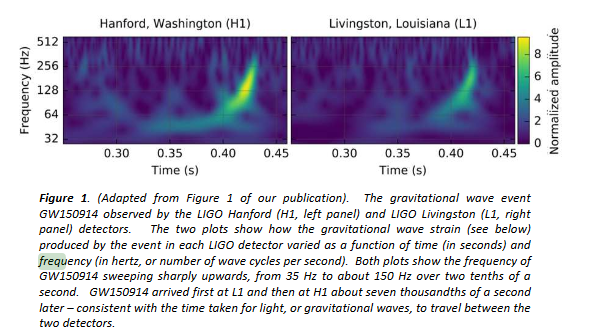 The original waves are redshifted.

Estimated source parameters for GW150914. We report the median value as well as the range of the 90% credible interval. Masses are measured in the source frame; to convert masses to detector frame, multiply by (1 + z). The source redshift assumes standard cosmology.

The LIGO detectors, which measured the waves, do not use bar detectors; they use interferometers. Bar detectors have been used for decades, but they have not been sensitive enough to make actual detections. They are necessarily very short, which reduces the effect of a gravitational wave. As you indicate they also have fairly narrow resonant frequencies at which they are most sensitive. Interferometers, on the other hand, can be made 4 kilometers long (like the LIGO detectors), which magnifies the effect of the waves. They are also sensitive over a fairly broad range -- roughly 40Hz to 2000Hz.

As anna v rightly points out, there actually are plenty of references to frequency if you look at the science papers. I work in gravitational-wave astronomy, and decomposing things into frequencies is our bread and butter. There's less coverage of this in the popular press, presumably because the public tunes out talk of frequencies, and pop-sci journalists know where their bread is buttered. But Fourier transforms are really how the analysis gets done.

There are plenty of references made to the frequency. The gravitational waves that were detected swept up in frequency and amplitude from an undetectable level at a few tens of Hz to abut 150 Hz as the black holes merged. This is known as a "chirp".

Gravitational wave sources might have a variety of frequencies. For binary systems, the principle gravitational frequency is twice the orbital frequency.

A more general rule of thumb is that the highest gravitational wave frequencies produced will be at around the reciprocal of the freefall timescale for a system $f_{\rm max} \sim \sqrt{G\rho}$, where $\rho$ is the average density of the system. In the case of the merging black holes here, $\rho$ can be represented as the mass of the black holes divided by a volume defined by their event horizons and $f_{\rm max} \sim 1$ kHz.

As the event horizon radius is proportional to $M$, then $f_{\rm max} \propto M^{-1}$ and so merging events for supermassive black holes are expected to be at much lower frequencies.

Not the answer you're looking for? Browse other questions tagged frequency gravitational-waves ligo or ask your own question.

-3
What is the typical order of magnitude (*numerical* in $\rm Hz$, not expression) of frequency of a gravitation wave?
4
How powerful must a gravitational wave be, to be audible to a human?