Angular equilibrium on a see-saw

I have a tonne of questions related to see-saw equilibrium because most places I've been to online only deal with horizontal equilibrium - but static equilibrium can occur on an angle too. My questions stem from some torque/force concepts established in a previous question:

Why does the weighing balance restore when tilted and released

In the above link, it was established that by applying an unbalanced force to one side of the scales, they will begin to sink towards the side of the applied force. However, by doing so, the torque from the force is decreased (since only the component of the force perpendicular to the beam contributes to torque) - and apparently torque on the opposite side increases. Eventually a point will be reached where the two opposing torques are in equilibrium.

Also, could you help me see if the following way of conceptualising the situation is accurate: When a force is applied to only one side of some scales (or a see-saw, like in the image below), the centre of gravity is not initially at the pivot point....

So the see-saw will rotate about the pivot point until the centre of gravity occurs in the same location as the pivot point, where equilibrium is achieved (Is this true? I just assumed it). 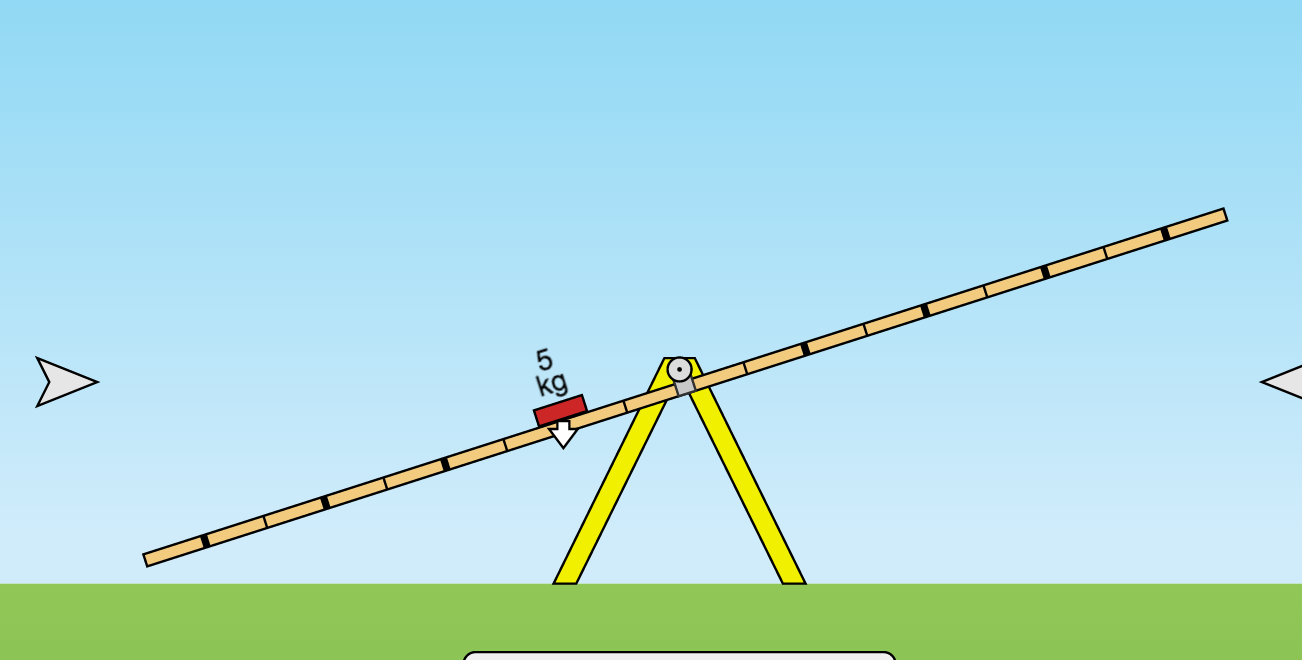 p.s. images from a PhET simulation (:

If the see-saw is hanging from the pivot point, at equilibrium we would have the following situation: 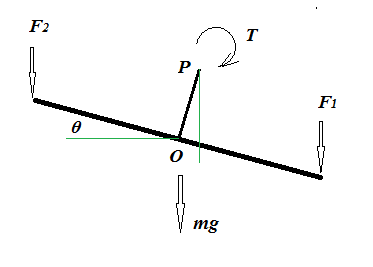 The beam's overall length is $2L$ and is attached to the pivot point $P$ at the centre of the beam. I'll also assume the centre of gravity of the system is in $O$ ($mg$ is the total weight of the system: beam plus $PO$) and that the distance between $O$ and $P$ is $D$.

The equation of motion then becomes:

$$T(\theta)=I\frac{d^2\omega}{dt^2}$$ Where $I$ is the moment of inertia of the system about the point $P$ and $\omega$ the angular velocity of the CoG of the system about $P$. That's the equation of motion of an oscillation and for small angles $\theta$ of a simple harmonic oscillation. So the system will not simply move to equilibrium, it will oscillate about it.

Use this article by NASA as reference. Read the part in italics at the bottom very carefully. No FRICTION is considered at the pivot.

The simulation by Phet includes some friction at the pivot. I have also created a similar but better version of the Balance and Torque Simulation in HTML5.

I also want to add a more general comment about torque. Calculations with torque are really easy (especially in equilibrium), but students frequently forget the most important thing to do in such calculations: pick an origin and stick with it. You can pick any origin at all, and the calculation should come out right. Just be sure to use the same origin for all the torques you use.

Even though any origin should work, there is one little trick to choosing the origin that can make things easier. Depending on where you choose your origin, certain hard-to-calculate things may cancel out. Now, remembering that torque is $\vec{r} \times \vec{F}$, you'll want to choose an origin where $\vec{r}=0$ for some force, or the force is perpendicular to $\vec{r}$, for as many of the forces as possible.

In your example, choosing the origin somewhere along the beam makes it at least easier to calculate the angles. One natural choice would be at the pivot point, because $\vec{r}=0$ for that force, so there would be no force from the pivot. But you could also choose the origin at the location of the mass, in which case you would need the force of the pivot.

Now, you may be concerned that you have no information about the force exerted by the pivot. But you can make another equation that will tell you it. The sum of the torques must be zero in equilibrium, but the sum of the forces must also be zero in equilibrium. This looks like a harder way to solve the problem in this particular case, but there are other cases where it can be useful.

Not the answer you're looking for? Browse other questions tagged newtonian-mechanics forces mass torque equilibrium or ask your own question.

23
Why does the weighing balance restore when tilted and released

1
Question about teeter totters or see saws
0
Equilibrium equations
0
Finding the force exerted by a mass at different contact points
1
How is rotational torque calculated when a force is applied uniformly over a surface?
0
Gravitational potential energy on a see-saw
1
Minimal angle that will cause a cube to tip on an inclined plane
0
Torque and angular acceleration , moments , counterweight
1
Evaluating sum of torques for different choices of origin when solving equilibrium problem
1
Will a beam floating in space bend if a net torque is applied?
0
Why isn't this rod in neutral equilibrium?