How I think about rolling [closed]

Below, I have written how I think about rolling. I wish to know if my idea as to how it works is correct.

This also leads me into thinking that the ball will roll only on a frictionless plane.

If the way I think about rolling is right then is there a way a ball can be "induced" to roll even on a frictionless plane?

Your idea of how rolling works seems (and probably is) correct. But that is not enough to give a mathematical or physical description. There is another way to see that.

The motion of the individual particles of a rolling ball is pretty complicated, but that of its centre is very simple, motion with a speed $v$ in linear forward direction. So we think, how do the "companion particles" around it appear to this "central particle"?

So we hop onto a car (that is, in a frame) which moves with the same speed $v$ moving in the direction of the rolling ball. And voila! We see that the centre is stationary, and all other particles are moving in perfect circular motion around it!

This is what rolling motion is, superposition of uniform linear motion and rotational motion about an axis. This can be used to describe any kind of rolling motion, including skidding tyres on a road. So, we can see that to set a ball rolling on a frictionless plane, we have to simply give it both a forward motion (with some speed $v$), and a rotating motion (with some angular speed $\omega$). Note that here, both $v$ and $\omega$ can be independent of one another.

But friction helps us in setting up this rolling motion, because it removes the need of us setting up rotational motion! Suppose we throw a ball perfectly rectilinearly (without rotational motion or spinning), then after some time, the ball starts spinning because of friction! How does it do that? 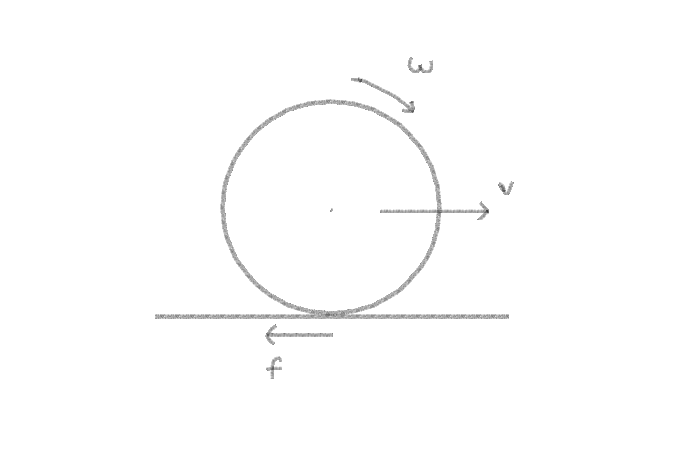 Well, if we again sit in that car moving with speed $v$, we see that the ball is at rest, and the floor is rubbing it in the opposite direction, and so it applies friction on the ball in the backward direction. This applies a backward force on the ball acting to reduce its speed, and a forward torque which acts to increase the forward rotation of the ball. Now, till when will this continue to happen? Till the speed of the ball is reduced to a speed $v_1$ and the angular speed increased to a value $\omega$, such that: $$v_1 = R\cdot \omega$$ where $R$ is the radius of the ball. This is the special situation which we call pure rolling. Now from the car (now moving with speed $v_1$), we see that the ground is moving backwards with speed $v_1$ and the particle of the ball touching the ground also moves backward with speed $v_1$. As there is no relative motion between them, so friction stops acting, and the ball continues to roll with this speed $v_1$.

One more thing, if you dropped the ball spinning with angular velocity $\omega$ (and zero linear velocity) on a rough surface, the ball still starts rolling, because this time, friction acts in the forward direction, and thus increases linear speed and reduces angular speed till again, $v=R\cdot\omega_1$.

0
Can a ball stay still while laying on a inclined plane?
1
Acceleration of ball rolling down incline
2
Ball rolling on half-pipe
4
Conceptual rolling
0
Why does a ball keep rolling?
2
What is the exact role of friction in rolling without slipping?
36
What will happen to a ball kept on a frictionless inclined plane?