Consider a reference frame which is rotating (for example on a carousel) and a steady inertial frame, with the same origin.

I would like to understand a little deeper why do the two terms $\vec{\Omega}\times\vec{v'}$ appear, from a physical point of view.

I found on this Wikipedia page http://en.wikipedia.org/wiki/Coriolis_force#Causes, an explanation about it.

The same velocity (in an inertial frame of reference where the normal laws of physics apply) is seen as different velocities at different times in a rotating frame of reference. The apparent acceleration is proportional to the angular velocity of the reference frame (the rate at which the coordinate axes change direction), and to the component of velocity of the object in a plane perpendicular to the axis of rotation.

I do not understand what does this mean actually and the physical meaning of this other term.

The $\Omega \times$ terms signify change due to the moving orientation of the item. So the velocity vector when attached to a moving body will cause a $\Omega \times v$ term in the acceleration vector.

Due to rotation of the dashed frame the tip of the vector starts rotating about the axis of rotation and any change in time dt leads to a change dr which is the vector joining the tip of r at time t and t+dt lying on the arc of a circle ,thereby if one calculates the rate of change the operator relation between two frames comes to-

d/dt = d/dt + w x... so we get the relation between velocities in the two frames.

w x v' twice in the equation for acceleration.

Thus the physical basis for the Coriolis acceleration having a factor of two is the rotating frame description which leads to a rotation of the velocity vector itself and leads to experiencing a force in a direction perpendicular to the plane containing w and v'.

Imagine two ficed chares on an axis that can rotate (like merry go round). On the one chair is your friend that holds a ball and on the other it's you. At some point the hole system starts rotating and your friend throws the ball towards you. After he throws the ball you have changes position so the ball doen't come to you. Instead according to you it moves on a curve. (Image) 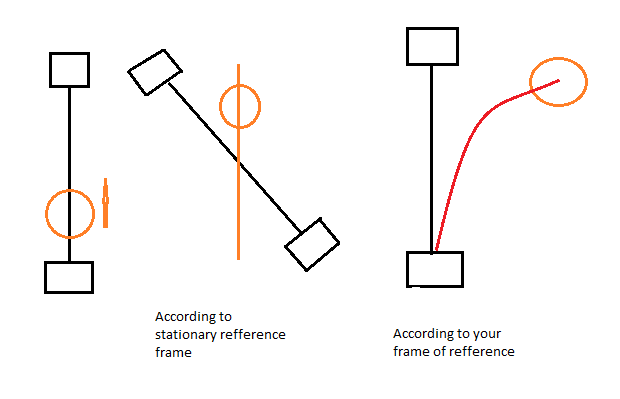 In reallity if we ignore the air resistance the only force that is acted upon the ball after the friend thows it towards you is gravity. So the ball should not move on a curve like this.

Fictitious forces are not real ones. They are measured by non-inertial observers to transform whatever physics hold on their frame of reference to make it newtonean and explain the phenomenon that they observe.

So since you see the ball moving on a curve you assume that a force normal to it's original (to you) direction is acted upon it.

Now, the faster you rotate the greater the displacement you will observe, so the force you measure is greater. The same holds with the speed in respect to you!

Not the answer you're looking for? Browse other questions tagged newtonian-mechanics reference-frames acceleration inertial-frames coriolis-effect or ask your own question.