Why do travelling waves continue after amplitude sum = 0?

My professor asked an interesting question at the end of the last class, but I can't figure out the answer. The question is this (recalled from memory):

There are two travelling wave pulses moving in opposite directions along a rope with equal and opposite amplitudes. Then when the two wave pulses meet they destructively interfere and for that instant the rope is flat. Why do the waves continue after that point?

Here's a picture I found that illustrates the scenario

I know it's got to have something to do with the conservation laws, but I haven't been able to reason it out. So from what I understand waves propogate because the front of the wave is pulling the part of the rope in front of it upward and the back of the wave is pulling downward and the net effect is a pulse that propogates forward in the rope (is that right?). But then, to me, that means that if the rope is ever flat then nothing is pulling on anything else so the wave shouldn't start up again.

From a conservation perspective, I guess there's excess energy in the system and that's what keeps the waves moving, but then where's that extra energy when the waves cancel out? Is it just converted to some sort of potential energy?

This question is really vexing! :\

What you cannot see by drawing the picture is the velocity of the individual points of the string. Even if the string is flat at the moment of "cancellation", the string is still moving in that instant. It doesn't stop moving just because it looked flat for one instant. Your "extra" or "hidden" energy here is plain old kinetic energy.

Mathematically, the reason is that the wave-equation is second-order, hence requires both the momentary position of the string as well as the momentary velocity of each point on it to yield a unique solution.

ACuriousMind's excellent description was missing a picture. Here it is: 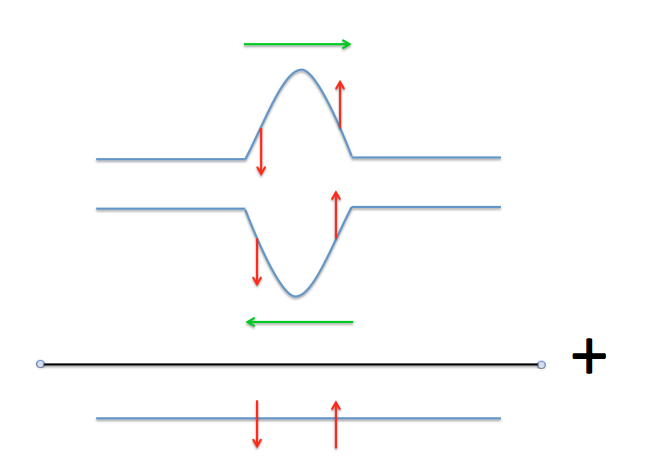 Summing them, you get a straight line with significant velocity.

Just to complement the other excellent answers, here's an animation showing what two wave pulses with opposite amplitude passing through each other actually look like:

You can clearly see that, at the instant when the string is momentarily flat, it's not stationary but rather moving quite rapidly, and thus will not stay flat for long.

(Obviously, the animation depicts an idealized string with perfectly linear wave propagation and zero dispersion, but the same qualitative behavior can indeed be observed in the real world e.g. in a flexible spring.)

Not the answer you're looking for? Browse other questions tagged newtonian-mechanics waves energy-conservation conservation-laws superposition or ask your own question.

22
Energy conservation and interference
2
Intuitive explanation of the waves superposition
3
Why inversion of wave for rope fixed at one end?
0
Where is the energy stored in destructively-interfering waves?
5
How does a string store information during wave superposition?
0
Standing wave and energy conservation