Presentism: doesn't everything exist at the same moment? [closed]

The Help Center recommends I 'fix' this question:

"It seems self-evident that everything exist in the Now. Notwithstanding time-dilation and different rates of the passage of time and entropy, doesn't this all still happen in the same universal moment?"

This question was asked with a rusty but apparently adequate awareness of special relativity. However, it may have been mistaken to assume that 'presentism' only refers to the present. There is a fuller definition according to this article:

Is There an Alternative to the Block Universe View?

If one can talk about a widely (explicitly or implicitly) accepted view on reality it is presentism – the view that it is only the present (the three- dimensional world at the moment `now') that exists. This common-sense view, which reflects the way we perceive the world, has two defining features: (i) the world exists only at the constantly changing present moment (past and future do not exist) and (ii) the world is three-dimensional.

According to special relativity the universe is four-dimensional, so presentism in this form is ruled out.

Nevertheless isn't the present universal? For example, regardless of the the observers' frames in the diagram below, they see event A at the same time, say, at t[0] = "the present". 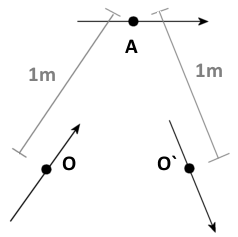 The exception to this post-relativistic presentism comes only from the realms of time-travel, which would permit the past and the present to coexist. Most speculative, of course.

So is this question on presentism correct? (If not blindingly obviously so.)

The following quote from "The Feynman Lectures on Physics, Vol. I, 17-3 Past, present and future" illustrates why the answer might be less than obvious. However, just because the present may be unobservable does not mean it does not exist. As far as I am aware, it does. It seems some physicists discount its existence because it is unobservable, which may be the reason for the confusion. 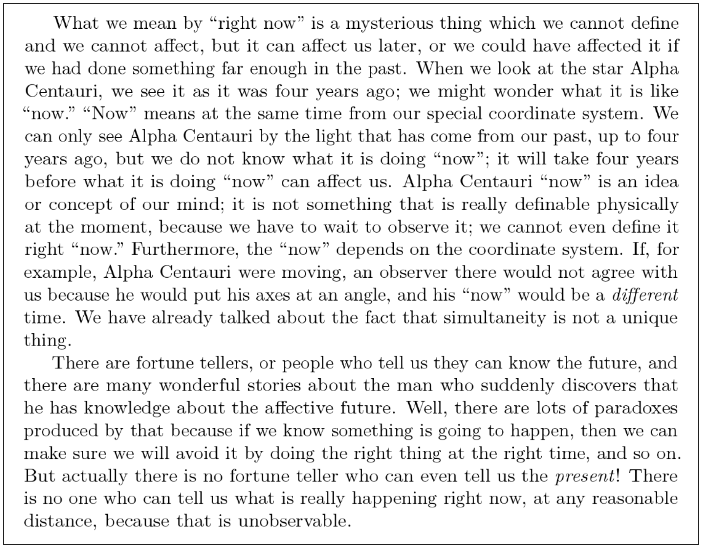 According to the classic physics/Newton there was an absolute time in which things happens. But this intuitive perception of reality is left since Einstein proved that there is not an absolute time but a relative one depending on the observers' frame. Not our intuition is valid but what is measured.

According to Newton, absolute time exists independently of any observer and progresses at a consistent pace throughout the universe. Unlike relative time, Newton believed absolute time was imperceptible and could only be understood mathematically. According to Newton, humans are only capable of perceiving relative time, which is a measurement of perceivable objects in motion.

So already Newton would suggest that if you can't measure it it is imperceptible. So if in special relativity one thing happens at two different times only those are valid because measured and experienced. And to measure the time those measurements were made is not possible because the absolute reference time is imperceptible.

So perhaps the common event happened at one moment but there is no access to. In this line see also Kant. But perhaps Kant would even go further and presume that time exists only in our head.

http://www.fourmilab.ch/etexts/einstein/specrel/www/ ON THE ECTRODYNAMICS OF MOVING BODIES, A. Einstein, 1905: "From this there ensues the following peculiar consequence. If at the points A and B of K there are stationary clocks which, viewed in the stationary system, are synchronous; and if the clock at A is moved with the velocity v along the line AB to B, then on its arrival at B the two clocks no longer synchronize, but the clock moved from A to B lags behind the other which has remained at B by tv^2/2c^2 (up to magnitudes of fourth and higher order), t being the time occupied in the journey from A to B."

Not the answer you're looking for? Browse other questions tagged special-relativity time time-travel wormholes or ask your own question.

23
Is time travel possible? Is it possible to go back in time?
4
Postulates of general relativity

10
According to General Relativity, Does The Past “Exist”?
1
Wormholes and the illusion of time?
5
Is my grandmother alive for some alien who is located on some place and is moving with some speed?