How would you figure some of the methods (in order of importance) to take a picture of the supersonic bullet with the wave it produce in 1888?

It would still be almost impossible for me in 21th century to take this picture: 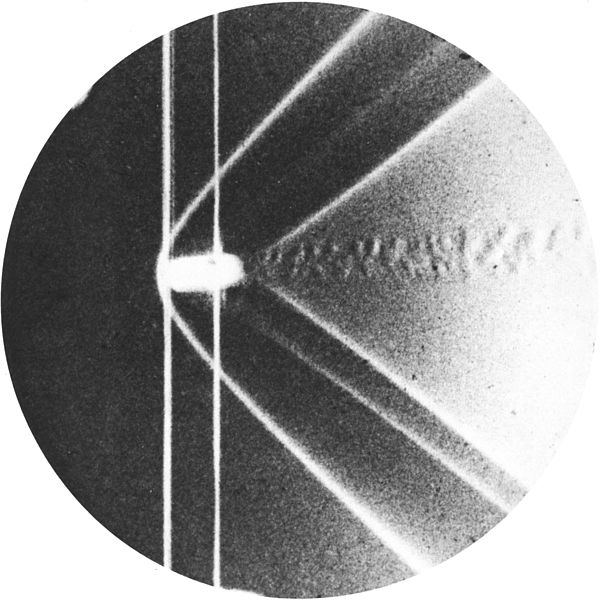 How would you figure some of the methods (in order of importance) to take a picture of the supersonic bullet with the wave it produce in 1888?

optics experimental-physics
Share
Improve this question
edited May 1 '12 at 6:27

A description is here:

He employed an innovative approach called the shadowgraph. A typical shadowgraph experiment is illustrated below. In this technique, light is passed through an airflow and reflected onto a screen or film plate. Since shock waves create changes in the temperature and density of the airflow, the light waves are bent, or refracted, as they pass through the shock waves. These refracted light patterns create shadows that can be seen on the screen.

Once one has the "picture" recording it is a matter of triggering the exposure of the camera to the passing of the bullet. Since he had also experimented with spark shock waves I guess the following experimental setup:

The signal from the trigger wires ( the two vertical lines in the photo you show) triggers a spark gap in a completely dark enclosure where the film is exposed and waiting. When the spark comes during the passing of the bullet the differences in the refraction index of the air from the shock wave are recorded.

Actually we used the technique of triggered sparking to record cosmic rays passing through a spark chamber back in the 1960's. The film was continually exposed and was moved forward after the sparking/passing cosmic. The spark lasts nanoseconds only.

If the object that is being photographed moves noticeably during the exposure, the image is going to be blurred. As Mach was trying to get a photograph of a supersonic bullet, moving at more than 600 m/s, the exposure needed to be very brief:

It's very difficult to get very short exposures using mechanical shutters, so Mach used a spark discharge to get a very short light pulse that was bright enough to expose the film (the film "only cares" about the time-integrated exposure, not about brightness).

The photograph was a shadowgraph, with the bullet casting a shadow over the film, because Mach was interested in seeing photographical evidence of the shockwaves he had predicted.

Not the answer you're looking for? Browse other questions tagged optics experimental-physics or ask your own question.

4
How does a holographic object change perspective when the image is rotated?
11
Put a sensor at the focal length, behind, or in front?
1
Experiment regarding myopic correction by a manipulation of fingers?
2
Best/Most crafty ways to enhance spectrometer data from a mini-plasma generator?
4
Exclusion limits on particle dark matter
1
reading the bubble chamber image
1
How do CRA (Chief Ray Angle) and FOV (Field of View) affect one another?
1
What will be the effect on the image formed by a mirascope if spherical mirrors are used instead of parabolic mirrors?
2
Optimizing Muon Lifetime Data
0
Do electromagnetic waves spread out in vacuum, i.e. does the width of the wavefront increase?