Is this really how a capacitor works? Why doesn't it behave like a resistor?

My book says a capacitor is two conducts being connected by an insulator. Now let's take a parallel plate capacitor to simplify the problem I have.

Suppose I got two parallel plate capacitor in series and I hook the circuit up with a battery. 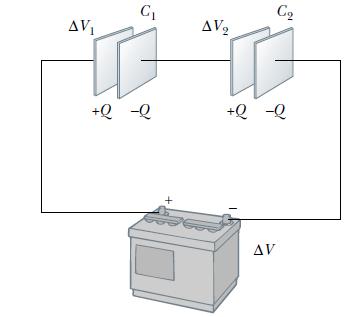 As soon as I hook it up, electrons flow (forget conventional current for now) into on the right plate and builds up on that capacitor (and spreads on the surface of conducting plate) and remains stuck there because there is an insulator that blocks the electrons from going anywhere.

Now here is my confusion, how does the left plate of $\ C_1$ even build the positive charges and how do the current even run through the circuit if there an insulator blocking the electrons from moving? Is there even current through the circuit?

Current does flow through the circuit but only for a short time, as a transient effect, while the charge builds up on the plates, and after that current flow stops. You can think of electrons in the wire to the left as being attracted to the positive terminal on the battery, so they move towards it. However, because the circuit is open, soon enough the electrons near the plate leave a "hole" of positive charge on the plate, which soon enough becomes as attractive to the electrons in the wire as the battery, so the situation stabilizes. Needless to say, the analogous (but charge-opposite) process happens on the wire to the right, so the plate becomes negatively charged.

Simultaneously (i.e. with a delay too short to measure), the electrons on the middle wire then get subjected to the attraction of an increasingly positive charge to their left and the repulsion of an increasingly negative charge to the right, so they tend to move left and accumulate on $C_1$'s right plate (leaving a corresponding excess of positive charge on $C_2$'s left plate). After the transient, these charges exactly cancel out the charges on the other plates (the ones connected to the battery) so electrons in the wire do not feel any force and no current flows.

EDIT: Wikipedia's capacitor article has a nice section on a hydraulic analogy to a rubber membrane completely sealing a pipe, but able to stretch to a finite amount.

In the case of two capacitors in series, the effective capacitance is $1/(1/C_1 + 1/C_2)$, because the voltage $V$ is effectively divided between them.

Maybe an easier way to see this is to define inverse capacitance $K = 1/C = V/q$ which is, for a particular capacitor, the amount of voltage $V$ needed to put a given charge $q$ on one plate (and $-q$ on the other).

In a simple DC circuit current doesn't flow and there is no voltage difference between the left plate of C! and the right plate of C1.

0
Is it true that capacitors closer to a power source charges quicker and gets priority?
1
Typo in physics book (capacitors)
1
What actually happens in a capacitor?
0
Parallel capacitors discharging with different capacitances
0
Tricky: Inserting a conductor in a parallel-plate capacitor
0
How is current affected by a charging capacitor in parallel to a resistor?
0
How do electrons flow when a capacitor is connected to a battery with certain voltage?
3
Apparent paradox of current through two parallel plate capacitors in series in an open circuit