Why is the cut off mass for massive stars 8 solar masses? Why can't it be 10-11 solar masses or so?

I know that stars having a mass greater than or equal to 8 solar masses are termed "massive stars". But why is the cut-off 8 solar masses?

The division is conventionally made at the boundary between where stars end their lives as white dwarf stars and where more massive stars will end their lives in core collapse supernovae.

The boundary is set both empirically, by observations of white dwarfs in star clusters, where their initial masses can be estimated, and also using theoretical models.

The division is not arbitrary, it is of fundamental significance in studying the chemical evolution of a galaxy. The nucleosynthetic products of massive stars are fundamentally different to those of lower mass stars. The products also get recycled into the interstellar medium in a rather different way. Further, massive stars will affect the interstellar medium through supernova explosions in a manner that just doesn't occur in lower mass stars.

The reason for the 8 solar mass division (it is uncertain by about 1 solar mass and also depends to a certain extent on rotation and the initial metallicity of the star, so is not a sharp threshold) is that this is where the carbon/oxygen core (during He shell burning)$^{1}$ becomes hot enough to ignite further fusion. Core burning continues through to iron-peak elements, then there is a core mass collapse, a violent supernova and large quantities of processed material (O, Mg, Ne, Si, r-process elements) are ejected at high speeds. A neutron star or black hole remnant is formed. In lower mass stars, the core becomes degenerate, supported by electron degeneracy pressure, and core nucleosynthesis halts. The star ends its life by expelling the majority of its envelope (mostly H and He, with some enrichment with C, N and s-process elements) at low speeds through stellar winds. The degenerate core becomes a white dwarf.

$^{1}$ Actually it may be possible to go a step further along the fusion ladder and still avoid a supernova. Stars with a mass just a little more than 8 solar masses (and possibly even as high as 10.5 solar masses -Garcia-Berro 2013) may produce Oxygen/Neon white dwarfs as the final outcome.

The limit you quote seems to be a convention

A star whose mass is larger than approximately 10 → solar masses. The → spectral types of massive stars range from about B3 (→ B star) to O2 (→ O star) and include → Wolf-Rayet stars as well as → Luminous Blue Variables

Massive stars are brighter, fuse faster, and perish more dramatically. There is no sharp definition of a “massive” star, but it generally means a star with a mass of more thanc 8 Msun.

It must be a cutoff from distributions which characterize brighter, fuse faster, and perish more dramatically

Here is a brightness plot as an example:

The x axis is color axis. 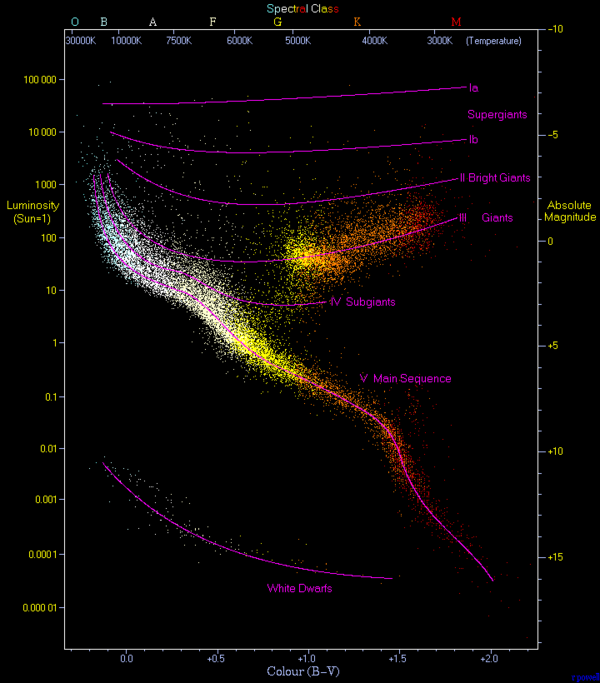 The distributions are continuous and any cutoffs will not be strict.

Not the answer you're looking for? Browse other questions tagged astrophysics terminology conventions stars stellar-physics or ask your own question.

8
How do we know the masses of single stars?
3
How the mass loss rate by stellar wind is calculated for massive stars?
2
Implications of the Jeans mass
13
What is the percentage of stars that are massive enough to end their lives in a supernova?
7
What is the luminosity of the Milky Way galaxy?
5
According to the initial mass function, should there be more brown dwarfs than red dwarfs?
0
If both neutron stars and white dwarf stars can have the same mass, what determines what a star of that mass will become when it “dies”?
8
Why are some stars very large (i.e., $r \geq 1000 \ R_{\odot}$) but not super massive?
3
For a collapsing star, at what mass is the formation of a black hole inevitable?
2
If I add more mass to a red giant, will it become a supergiant?