How to find the direction of friction in rotation?

Suppose we have a spool which is plucked constantly from top with a force F. The spool is on a rough ground. We have to find the direction of friction, nd direction of motion of spool.

How do we get to know where does the friction act? Does friction tend to stop the rotation of spool?

From definition of Friction:

Friction is the force resisting the relative motion of solid surfaces, fluid layers, and material elements sliding against each other.

Now consider your problem. Let the force be $F$, mass of spool be $m$ 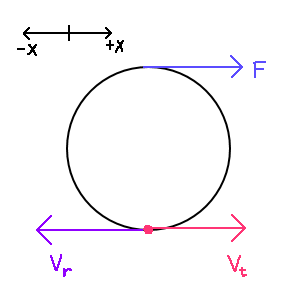 If Friction is absent

Therefore we can say in general, for rigid body, that: $$\boxed{v_{rot} > v_{trans}}$$ Due to absence of friction, $\mathbb{v} \neq 0$ and also that the bottom point of wheel will have a net velocity in backward direction, and spool will slip.

If Friction is present

If Friction is present, it would make $\mathbb{v} = 0$, since it tends to remove relative motion between the bottom of spool and ground.

Now, the direction of friction will be decided by the velocity which was greater in the earlier case.

As we saw earlier, $v_{rot} > v_{trans}$ for a rigid body, $\mathbb{v}$ came out to be negative, hence friction will try to make $\mathbb{v}$ zero, or will be exerted in positive $x$ direction on spool.

Friction always opposes relative motion. So on ground, friction will act in -x direction (by third law of Newton).