Does this shadow diffraction effect have a name?

(Aside: It occurs to me that the finite angular size of the sun may be significant for this effect. I suspect the same would be true of a point source, but I haven't investigated this yet.)

My questions are: Does this effect have a name, and can someone point me to a mathematical analysis of it? I would expect such a basic phenomenon would have been analyzed long ago, but when I try to search for it I just find a bunch of papers on CGI shadows (not what I want).

(Of course, if no one has done the analysis on this, please tell me, and I'll gladly be the first :)

Edit: In response to the suggested duplicate (Why do shadows from the sun join each other when near enough?), the effect I am describing is different because it depends in an essential way on the separation of the two shadow-casting objects in the third dimension. A third case that I didn't mention above is where your hand is at the same distance from the shadow as the edge, in which case we return to the two-dimensional problem referred to in the linked question.

Edit 2: Here's a picture of the setup: 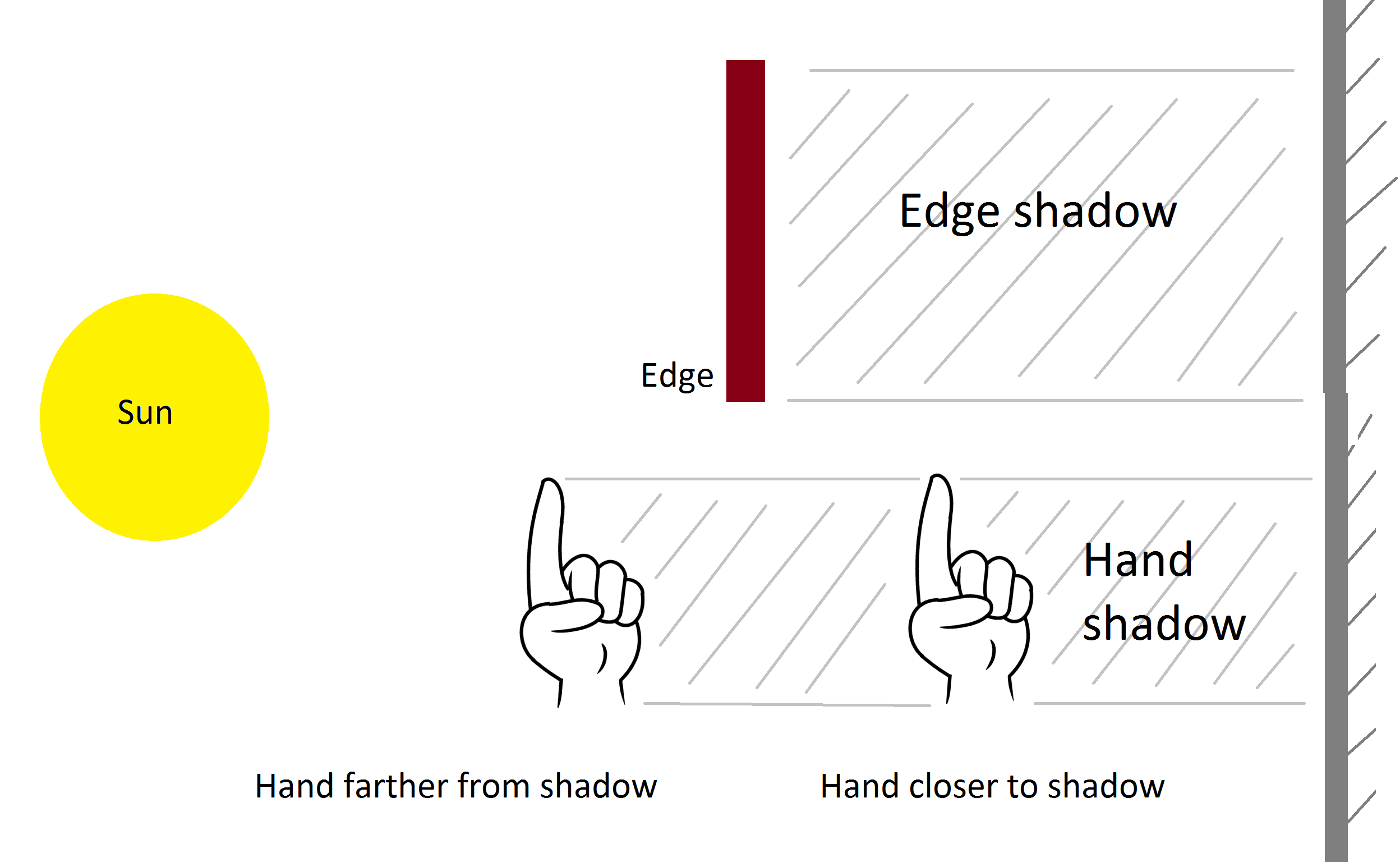 If you look at two fingers, at different distances, then bring the fingers together until the edges appear about to overlap, you will see the effect. The effect is MUCH stronger if you move your fingers close enough to your eye that you cannot focus on either one.

If you use a diffuse light source and cast slightly blurry shadows from your two fingers onto a white card, you will see the effect strongly. But change to a point source and do the same experiment, and you won't see the effect at all.

Those facts all show that the effect is not due to diffraction or interference, it is purely due to geometric optics.

We know light diffracts into the geometrical shadow, and as a result the "diffraction pattern/shadow" extends beyond the geometrical edge of each object. That effect can explain many such phenomena. See Spot of Arago. However, some similar effects also occur in a purely geometrical manner due to an extended light source like the Sun. See Applied Optics 38(9), 1573. BOTH effects probably contribute to your experiment, and I haven't yet found an analysis that includes them both. BTW, diffraction occurs regardless of the coherence of the light and the size of the object.

Not the answer you're looking for? Browse other questions tagged diffraction shadow or ask your own question.

169
Why do shadows from the sun join each other when near enough?

169
Why do shadows from the sun join each other when near enough?
452
How does light bend around my finger tip?
2
Is Veritasium's "Shadow Illusion" caused by Image formation or Diffraction?
75
What is this shadow being cast upon?
1
Horizontals in a grid do not cast shadow while verticals do. Why is this?
0
What does Fraunhofer diffraction around a circular shadow look like?