Which came first the decay or the emission?

This question is related to: Physical reason behind one of the selection rules? and links in the comments.

Take a hydrogen atom in an infinite and otherwise empty universe. The hydrogen atom sits in an excited state, $|e\rangle$. Fermi's golden rule says that if we have a perturbation of the form, $\hat V_0 e^{-\omega ti}$, then the rate of decay from our $|e\rangle$ to a state of lower energy $|g\rangle$ is given by: $$R_{if}=\frac{2\pi}{\hbar} | \langle g |\hat V_0|e \rangle|^2 \delta(\omega_f-\omega_i-\omega)$$ In the above linked question, what I interpreted was been said is that the perturbation $\hat V_0 e^{-\omega ti}$ is that due to the emitted photon. However, for surly such a photon to be emitted the atom must already have decayed. So we seem to have a situation that can never occur since for the atom to decay we must have a photon already emitted but for the photon to be emitted the atom must have already decayed. So where is my reasoning wrong and which comes first the decay of the atom or the emission of the photon?

I think I can pinpoint the misunderstanding that lead to your question. It is here:

In the above linked question, what I interpreted was been said is that the perturbation $\hat{V}_0 e^{-\omega t i}$ is that due to the emitted photon.

The mistake is in thinking that the perturbation is due to the emitted photon. The fact is, the perturbation is not due to the presence of any given photon, but rather due to the coupling to the electromagnetic field. Each mode of the quantum electromagnetic field has a quantum mechanical spread (or "noise") in its amplitude, and it is this "noise" that agitates the excited atom leading to its spontaneous emission of a full blown photon.

n.b. Your "Which came first..." title has mislead others about the true nature of your question. The title should have been worded "What is the cause, and what is the effect..."; I suggest you make the appropriate edit.

As in all interactions in quantum mechanical terms, one needs a Feynman diagram: 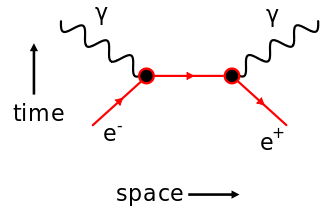 In this diagram of e+e- annihilation into two photons, time goes up, and both photons are simultaneously emitted . If one reverses the axis its is photon electron scattering (the second e is a e- by the diagram conventions) and the interaction is simultaneous in t1 a virtual electron arises, and it splits into a real photon and an electron at t2 simultaneously.

In Hydrogen deexcitation there is also a before, a during, and an after. In your problem, the "before" the interaction is an excited hydrogen atom, the "during" is the emission of a virtual photon from a virtual electron, and the "final" is a real deexcited atom and a real photon.So the deexcitated atom and the real photon appear on the same time in the time axis of a Feynman diagram.

It is complicated to draw the Feynman diagrams for this,

because of the bulk of the wavefunction of the hydrogen. These are Feynman type diagrams, i.e. there are specific rules how they translated to calculable formulae.

Assuming ''a hydrogen atom in an infinite and otherwise empty universe'' makes your question meaningless. Your universe does not contain anything that could possibly induce the postulated perturbation $V$.

Thus the state of the hydrogen atom evolves according to the unperturbed Hamiltonian and hence always remains in the excited state without emitting anything.

To have a nontrivial $V$ you need to posit more stuff in the universe, so that it can interact with the hydrogen molecule. But even when you just posit an external electromagentic field coming from nowhere, Fermi's golden rule gives a transition rate for an ensemble of many equally prepared systems, and is meaningless in a universe containing only one system.

https://en.wikipedia.org/wiki/Fermi's_golden_rule: ''Fermi's golden rule is valid when the initial state has not been significantly depleted by scattering into the final states.''

The moral: If one tries to interpret a formula outside the context in which it can be derived one must be prepared for effectively interpreting ''a situation that can never occur''.

1
Physical reason behind one of the selection rules?
0
Does electric and magnetic field interact?

4
Decay of metastable state: spontaneous vs. stimulated emission.
12
Why does a damped quantum harmonic oscillator have the same decay rate as the equivalent classical system?
6
Atom - light field coupling and emission process
3
Using symmetry to determine a hydrogen electron's decay route from $|300\rangle$ to $|100\rangle$
6
Intuition for why there are quantum beats in $V$-type but not in $\Lambda$-type atoms
4
Fermi's golden rule and Fock states