How do astronauts measure weight/mass on other planets? [closed]

At the start of The Martian movie the astronauts collect samples, targeting for "100 grams". Hence the question ... what units do astronauts actually use?

I did some quick google search but all I get is either how astronauts weigh themselves in zero gravity or how planet weight is calculated.

First of all, the astronauts would be measuring mass. This is the property of a thing that determines how hard it is to accelerate the thing. It does not change with the local gravity. or lack of gravity. A 450 Magnum slug will hurt just as much if it hits you on Earth, Mars, Luna, or the ISS.

There's a lump of stuff kept very safe in a lab in France. The mass of that lump is ***defined***as exactly 1 kilogram.

Most people will frequently use the terms weight and mass interchangeably. Only nerdy types like Physics teachers will insist on a distinction.

As it happens, an object's mass also determines how much force the local planet exerts on it. Thus, you can guesstimate the mass of something by lifting it and using experience to tell you the mass. If you lack the experience, like The Martian, the guess can be off.

You can measure the mass of an object by using a spring to pull up the object. This is unsatisfactory for a number of reasons: gravity is different in different parts of the world (and on different worlds) and the spring may change its properties with temperature, age, or mistreatment. If you look at the scale used in a store to measure stuff for sale, you may see something like; "Honest weight; no springs."

The simplest way to measure mass accurately is to use the local pull of gravity on two masses: the one you want to measure, and one or more standard masses that are already determined. For example, this chemical balance: 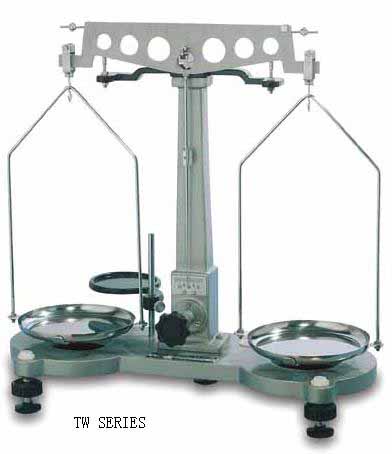 uses a set of calibrated masses piled on one pan, and the unknown mass on the other pan until the pans balance. This balance, with the same set of standard masses, can be used anywhere in the world, or on Mars, or the Moon, with exactly the same results in every location. The only assumption is that gravity is the same at both pans.

Another type of balance is slightly different:

Here, instead of having a set of standard masses, the balance has two or more standard masses that move from notch to notch in a horizontal bar. Here, the accuracy depends on the size of the standard masses and on the location of the notches in the bar. Worn notches, or smears of peanut butter and jelly on the masses, can degrade the accuracy.

In short, any scale that measures mass by comparing the pull of gravity on standard and unknown masses will work to give the same mass in any gravity field...

Yes, the astronauts would measure mass, which would be measured in kilogrammes (or some other multiple of the gramme). This is distinct from weight, which is the force (as opposed to mass) exerted upon that mass by virtue of the gravity of the planet/moon/spacestation that you're on.

A set of scales measures force, not mass, but the readout is calibrated in kilogrammes, indicating the mass of something which would (on earth) produce the same force as the thing being weighed.

How would you measure mass in zero gravity (or indeed on a body which had different gravity from earth)? Hold something in your hand and shake it from side to side, horizontally. Something which is more massive will require more effort to shake, because of its increased inertia. This measurement has nothing to do with weight, or gravity, and so could be done equally well, without recalibration, on earth, Mars, or wherever.

If on Mars where $g = 3.711 $ m/s$^2$ as the gravitational field strength is significant they can use a standard chemical/kitchen balance based on a spring or a strain gauge.
With the balance they can take with them a set of known masses to calibrate the balance in kilogrammes.
As well as compensating for the differing value of the gravitational field strength between the Earth and Mars this will ensure that any changes in the characteristics of the spring/strain gauge due to the space flight are not going to affect the measurements of mass.

Astronauts live in a difficult corner of the world. Everything they do is hyper-precise. Accordingly, one would expect the units they use to be hyper precise as well.

An astronaut has been through enough schooling to be very comfortable with the difference between mass and weight. Accordingly, the astronaut would have no problems if the instructions they are given specify either mass or weight depending on the particular observation being sought after.

If one is measuring out rocks, one will be dreadfully concerned with how hard they are to accelerate: inertia. Too much inertia and they cause your spacecraft to not go where you need it to. Accordingly, an astronaut would be told to measure the mass of the rocks, so the units would likely be in grams or kilograms.

On the other hand, an astronaut might be looking to measure the strength of a planet's gravitational field. In such a case, they would be instructed to grab an object of a known mass, and measure the force of gravity it feels, which would then be measured in Newtons.

There may be fuzzy situations, in which case an astronaut's understanding may be essential. One may wish to measure a mass of rocks, but not have access to a sufficiently large balance scale to do said measurement. In such a case, the astronaut may be instructed to measure the rock's weight, the force of gravity, in Netwons. That information would then be relayed back and conversions from weight to mass (by using a previously measured gravity term) would be applied. Even in this case, the astronaut would be told the correct thing to measure, and the units would vary accordingly.

Not the answer you're looking for? Browse other questions tagged mass weight or ask your own question.

3
What truly is mass, and is there a direct way to measure it?
0
Why is this mass equation giving me mass = weight when clearly it isn't?
0
How to determine the weight of an object in other planets?
1
How can a beam balance measure mass?