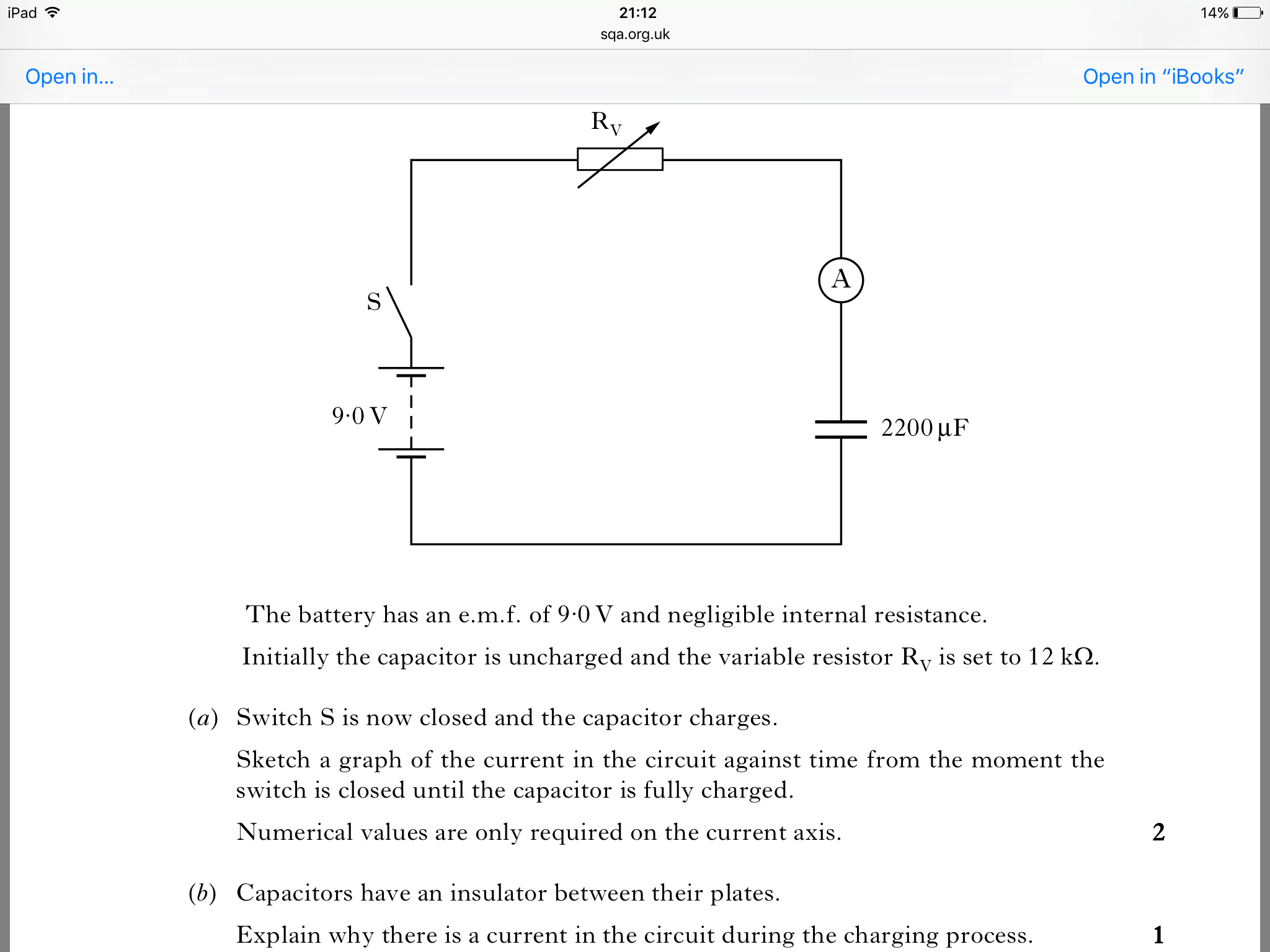 My answer was: As some of the electrons will initially be repelled by the electric field of the negative plate, there will be electrons flowing through the wires, resulting in a current in the circuit. The required answer was this:

This produces a reduction in the net electric field in the wires and so the flow of electrons (charging current) decreases.

Eventually the charges on the capacitor produce an electric field which has the same magnitude as that produced by the battery but opposite in direction, thus the net electric field in the wires is zero and so no more electrons flow along the wires.
The capacitor is fully charge with the potential difference across its terminals equal the the voltage of the battery.

In terms of force, which is what an electric field exerts on a charged particle, you could say that electrons are attracted to the positive terminal of the battery forced through the battery from the positive terminal to the negative terminal by a chemical process within the battery and then repelled by the negative terminal of the battery.
As changes accumulate on the capacitor plates those charges apply forces on the electrons which try and stop their movement and so the flow of electrons (the charging current) decreases.
There comes a time when the attractive/repulsive forces due to the polarity of the terminals are exactly balanced by the forces due to the charges which have accumulated on the capacitor plates, so the net force on the electrons is zero and no more current flows in the circuit.

You could think of the battery as a pump which moves electrons from the top plate of the capacitor to the bottom plate.
As more charge accumulates on the capacitor plates it becomes harder for the pump to move electrons because of the attraction of the positive top plate and the repulsion of the negative bottom plate.
Eventually no more charges can be moved.
This is equivalent to a water pump being unable to pump water above a certain height.

The positve terminal of the power supply is positive because there is a deficit of electrons there (leaving a net positive charge from nuclear protons in the material). As you know, opposite charges attract each other, so electrons are attracted to this region of net positive charge.

Not the answer you're looking for? Browse other questions tagged homework-and-exercises electric-circuits electric-current capacitance or ask your own question.

1
Why isn't this capacitor charging?
2
Capacitor Charging and Discharging when connected to the ground
5
Why doesn't current flow when the wire is open?
1
Typo in physics book (capacitors)
1
Charging a capacitor (terminals)
1
Does a capacitor experience a Newtonian reaction when being charged?
0
Why does current have to flow in the same direction?