What happens to the coefficient of friction as the normal force increases?

One more thing, the coefficient of friction is a property of the materials being "rubbed", and this property usually does not depend on the normal force.

Friction $F$ is non-linear by nature and linear models only apply in certain ranges.

Firstly, friction comes from the contact of the two surfaces. They are rough, so they have peaks and spikes that meet the other surface. At contact these peaks "glue" to the surface by adhesion (chemical bonding). In order to make the surfaces slide across each other, these bonds must be broken - in other Words: the strength of the material that these Peaks are made of, must be overcome so that they will deform and eventually break.

The shear strength $k$ tells something about when a material will start to deform from such sideways motion. Such deformation will namely change the surface and thereby the roughness and contact area.

The combination of these two models is called the Orowan's friction model, where the first one will apply for $\mu q \ll k$ and the second for $\mu q \gg k$. In the range around $\mu q = k$, this model is not usable. This is namely the region where the deformation zones around the asperities, which are being flattened, start to meet and overlap. The deformation zones Thus prevent each other from deforming further, and therefore the contact area stops being proportional to the increasing pressure. When the asperities are fully flattened the constant-friction law takes over. See the graph below: 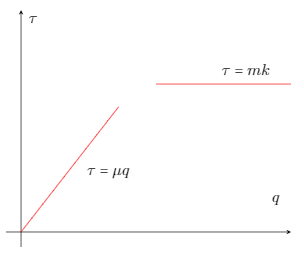 The in-between transition region is much more complicated than any of the two laws, which are merely applied in their respective regions in order to have simpler expressions to work with. Other models are trying to model the whole friction range better. The only one I know of is the Wanheim and Bay's friction model, which takes into account the area dependence:

where $f$ is called the friction factor and $\alpha$ is the ratio between the apparent and real contact area.

In the idealistic model of friction - the coefficient does not change.

But in the realistic, practical sense the idealistic model fails 9 times out of 10. The sliding of two surfaces causes heat and rise in temperature, and this can lead to second order effects. Continued sliding can polish the tow surfaces reducing roughness and this can reduce the coefficient. In other materials the sliding can create stickiness and lead to a slip-stick frictional force that's unpredictable by any model except perhaps in a few cases by stochastic models.

Friction is in general nonlinear and the equation you cite is an ideal approximation of how things might happen in the carefully controlled physics lab.

2
Coefficient of friction and practical experience of sliding
1
Will there be friction?
0
Friction is not proportional to area