How to interpret the units of the dot or cross product of two vectors?

If I take their dot product with the algebraic definition, I get this:

Dimensional analysis tells me that this is in meters squared, if I understand correctly.

Doing the cross product, however, I get this:

This doesn't make sense to me either.

I don't know if I'm thinking about this in the right way, so my question is this: when dot or cross-multiplying two vectors, how do I interpret the units of the result? This question is not about geometric interpretations.

As for the dot product of two vectors, based on the law of cosines, you can interpret it as half the difference between the sum of their squares and the square of their difference: 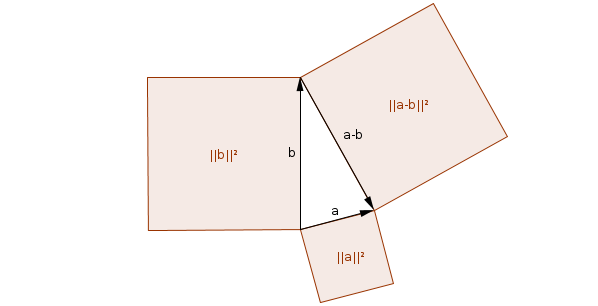 In other words, taking the vectors to be two sides of a triangle, the dot product measures (half) the amount by which Pythagoras' law fails for this triangle.

Another way to geometrically interpret (the absolute value of) the dot product is as half the area of the triangle formed by rotating one of the vectors by 90° in their common plane, and then taking the resulting vectors as two sides of a triangle:

Ps. I did notice (after posting this answer) that you asked specifically about the units of the products and "not about geometric interpretations." Even so, these examples should at least show that both the dot and the cross product of two length vectors can, in fact, be meaningfully interpreted as areas, and it should therefore not be surprising that, if the original vectors have units of, say, meters, then their product will be measured in square meters.

The unit of the dot product is not really meaningful. It's by definition the length of the projection of the first vector onto the second times the length of the second (or vice versa), which does not straightforwardly correspond to any area. It gets units of square-meters by definition, but there is no deeper interpretation behind it I could see.

It seems to me that you can always factor out the units of the components of a vector and rewrite it as a (physically) dimensionless vector times those units. Then the dot and cross products work on the dimensionless vectors and the attached units simply multiply together as they do in any non-vector problem.

As far as interpreting the resulting units, it will depend on whether you have constructed something that has a physical meaning or not. I suppose you could take the cross product of two force vectors but I don't think it will mean anything (but I'd be interested to see an interpretation if someone can think of one). Of course you can take the cross product of a position vector and a force vector and interpret the result as a torque.

Your dot product of two position vectors has square meters as units because it corresponds to a projected length times another length. And the cross product does correspond to an area as others have already pointed out.

The dot product of two length will nowhere occur in physics, that's why the unit is not meaningful.

Normally, you have a dot product either in a situation like $\cos(k\cdot r)$, where the $\vec k$ is chosen to give a meaningful number (phase) in the dot product, has the unit 1/m. It lives in completely another space than the radius-vectors, but they are somehow connected in the sense, that you can compare the directions of $\vec r$ and $\vec k$, they can be parallel, etc. This "somehow" needs some maths to write it more plainly: in short, the k-s represent linear functionals on the realspace...

Or you have a dot product in something like the calculation of work, where the unit is obviously meaningfull, too. The math should be similar here.

The cross product in explained in the other answer.

A dot product, much like a regular product, will produce a different quantity, usually with a different unit. That's not surprising, multiplication always does that (that's the point of units - they form a multiplicative group).

Consider the primary school version of work=force*displacement. You write it as $W=Fx$ (as "scalars"), you probably don't object to it. Well, it turns out, that only the force along the displacement counts as work, and in general, you need to write $W={\bf F\cdot x}$. So nothing really changed, except directions are now taken into account (dot product only multiplies parts of the vectors that are parallel to each other). The resulting unit is of course Joule (or some other unit of energy), just like in the scalar case.

For a cross product, it's essentially the same. Consider torque. You have $\bf M= r\times F$. Torque is a different quantity than distance or force. That would have been the case without the vector nature of the quantities.

However, there is something more subtle than that. Cross product doesn't produce a true vector, not when you take a really close look at it. The "sense" of the components of vector product has a sense oriented area about it... so it's not "how much of this-and-this we have in some direction" but "how much this-and-this goes through an area that points in some direction". We call those pseudovectors (axial vectors). Beside having this "feel" of circularity around some direction (look at the torque - it twists around an axis), it also has different symmetry properties. If you reverse all the vectors in the equation (flip the arrow), the cross product does not flip the arrow (because it's not really an arrow, it's an axis).

This "fine" point isn't necessary to understand the part about the units (that's just because a product always creates a different quantity), but I'm including it for completeness. Physical quantities are more than just numbers with units. There is a meaning and behaviour behind. Just recall that work and torque have the same units, but one is a scalar, and the other is a pseudovector.

As for the units, take $W=\vec{F} \cdot \vec{d}$, are more like relics of the two quantities entering the product, this example leaving behind units of $\text{N} \cdot \text{m} = \text{J}$.

And the cross product's units may be thought of as units of the area of a parallelogram in a sort of phase space (which would be difficult to visualize, since the space for two vectors of different units in 3 dimensions would be 6-dimensional).

While being admittedly geometric (um..... they're trig functions), this diagram concisely shows the relationship between the units. This has been said in a variety of different ways in the comments and other answers: 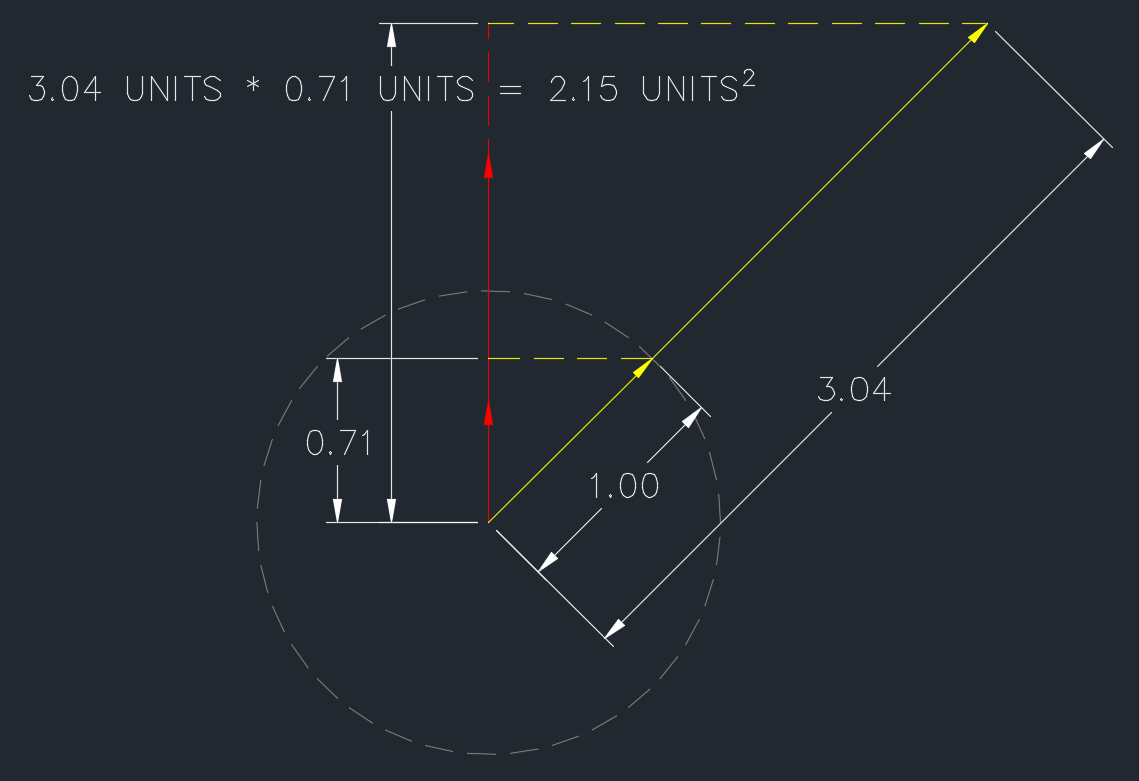 The same principal applies to the cross product. The diagram would be similar but look even more "geometric".

The dot product of two unit vectors can safely be considered a dimensionless quantity, from a dimensional analysis perspective — a unit vector is what you get when you divide a vector by its magnitude, and the dot product is linear in terms of the magnitudes of both vectors, so all of the units cancel out — and for the reason that you can take its arccosine to obtain the angle between the two vectors, and the cosine of an angle is dimensionless.

On dot product you get magnitude, in units of product of operands.

On cross product you get vectors with direction , in units of product of operands.

Not the answer you're looking for? Browse other questions tagged vectors units geometry mathematics dimensional-analysis or ask your own question.

79
What is the physical significance of dot & cross product of vectors? Why is division not defined for vectors?

2
The curl of a special cross product
22
Why can the cross product of two vectors be calculated as the determinant of a matrix?
1
Minkowski's dot product
4
Does $\nabla \cdot \vec{E}$ have the same meaning of dot product $ \vec{a}\cdot \vec{b}=|a| |b| \cos(θ)$?
1
Geometrized Algebra and Einstein's Equations
4
Why does electrical resistivity have units of $\Omega \cdot \mathrm{m}$ rather than $\Omega \cdot \mathrm{m}^3 ?$
0
Vectors and scalar product using the metric tensor - Coordinate transformation