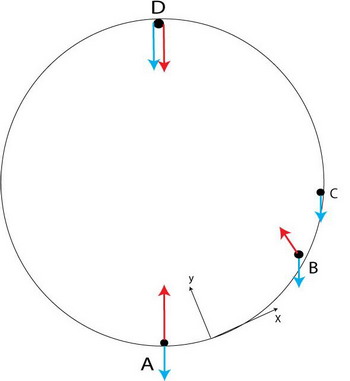 I have a couple of questions concerning vertical circular motion. The object shown in the diagram moves with constant speed on the inside of a circle.

In point A the normal force points to the center of the circle and the centripetal force is the vector sum of gravitation and normal force. Here the facts are clear.

A normal force means that part of the contact force between two objects (usually solids) that is directed perpendicular to the surface of contact. It's force will always be only as much as is needed to prevent the two object from occupying the same space.

A centripetal force is one that points toward the center of curvature. For objects whose motion is known (or constrained) to be along a prescribed curved path the net radial force will be exactly sufficient to provide the proper centripetal acceleration, which is $v_t^2/r$ (where $r$ is the radius of curvature and $v_t$ is the tangential velocity) on purely geometric grounds.

Now applying this understanding to the above problem.

I'm not going to continue, because you should have something to work out the hard way, but the whole analysis rests on getting the behavior of the normal force and the nature of centripetal accelerations right. Always check with the basics.

Every point-mass moves with acceleration

where $ \hat x $ is always tangent to the orbit and $\hat y$ normal to $\hat x$ towards the center of its curvature. The net force that is acted on the object that is rotating is

According to Newton's Second Law

According to Work-Energy Theorem

So the net-force in x-direction exists only when the speed of the point mass is changing. If its speed changes then its Kinetic energy changes. When there is change in kinetic energy there is work.

Therefore, if the net-force that are acting on the particle that we examine does not produce any work then the speed does not change and the only thing that changes is the direction of velocity.

In your case, the normal foce, does not produce any work but gravitational force does.

Now to examine the normal force in each position, you have to know the initial conditions.

For example in C-position, there might be a normal force, or it might not. If the object has a non-zero velocity then the Normal force exists, otherwise not. The same holds for every position (like D).

One more thing. The normal force will always be acted inwards or outwards. If the ball starts moving from inside then the basket for example can only push to the centre. Otherwise it can only push away from the centre. In your example, the first case applies.

The normal force is the response of the material providing support; it is found using Newton's 3rd Law of Motion, and a free body diagram. Often this is just the gravitational weight, but in this case the force which is holding you in place is centrifugal.

Since gravity is also present, you would add the component of gravity parallel to the radius vector pointing to the center of the object; sometimes this increases the net force, sometimes it reduces it. The other gravitational force tangential to the circle at your point of contact would be resisted by friction, and this also would change as you rotate.

If your object is moving around the circle at constant speed, then there is some other force acting besides gravity and the normal force of contact with the ring it's traveling around. You can see that from the animations below.

In particular, at your point C there is indeed an inward normal force that will provide the needed centripetal acceleration but there also has to be an upward force as well to keep the object from speeding up as it falls. I'm not sure what the mechanism of that upward force might be, but it has to exist if the object is to move around the circle at constant speed. (Maybe little rocket thrusters?)

I created these animations with a VPython program to show the motion and display the weight as a green vector, the constraint force in red (the normal force is part of this vector), and the net force toward the center of the circle (since it is moving at constant speed). This animation computes the constraint force by simply subtracting the weight vector from the net force.

You can see that for faster motion the constraint force is closer to being normal. It's interesting that the direction changes between the two examples because in the first case the constraint has to "hold up" the object to keep it from falling, and in the second case it has to work more at "holding it in" in a sense.

Not the answer you're looking for? Browse other questions tagged newtonian-mechanics forces centripetal-force free-body-diagram or ask your own question.

17
Why is normal force perpendicular?
16
A simple derivation of the Centripetal Acceleration Formula?
6
Understanding the relation of the centripetal force's direction and the weight in a loop-the-loop
5
What is a self adjusting force?
1
Forces in play on a ball at the exact point where the slope meets the floor. Related to normal force in vertical circular motion. (Answered)
0
Centripetal force related problem