What is "Dynamical phase transition"?

At present, a widely accepted one is by Heyl et al. See their original paper Dynamical Quantum Phase Transitions in the Transverse Field Ising Model. Basically, it means some quantity (e.g., the fidelity) as a function of time is non-analytical at some critical times. See the cusps in the following figure: 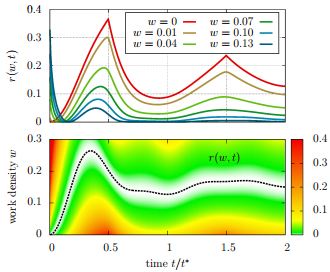 Similar evolution behavior was also discovered in single-particle systems, like the one dimensional tight binding model (see Cusps in the quenched dynamics of a Bloch state and wherein for other models). The cusps are sharp too:

Here each segment is a parabola.

Up to now, similar cusps have been observed in several different systems, all with different mechanisms.

Of course the name implies that time is involved somehow. People talk about dynamical thermal and quantum phase transitions and in one case you will rapidly change temperature, while in the other state defining parameter (say pressure or field etc.). We will consider thermal PT.

Now what does it mean rapidly? Let us consider 2-d order phase transition as they are most popular as well as because 1-st order are intrinsically dynamical.

You might know that the system relaxation time is divergent towards critical temperature. The phenomenon called critical slowing down. For detailed description see Landau volume X, last chapter. This mean that very close to Tc the system will take very long time to reach the equilibrium. I.e. to establish homogeneous order parameter throughout the sample

Next necessary component here are fluctuations. The system relaxation time is actually also (roughly) the lifetime of the fluctuations, which is apparent from fluctuation-dissipation theorem. So the fluctuations of the ordered state become more long lived as you go closer to Tc.

Finally we have to mention about coherence length, which is also divergent towards Tc from both sides.

Thus when you cool the sample your fluctuations become slow and large. When you are at Tc they interact and the global order parameter with macroscopically defined orientation (direction for ferromagnet or phase for superconductor) is established. This is possible because order parameter is so small that it costs virtually no energy to change it here and there. If the temperature were lower than the so-called Ginzburg temperature the order parameter would be stiff and thermal energy would not be sufficient to change it. This what happens in dynamical phase transition.

Now in dynamical phase transition the system is too slow to react to the changes in temperature and consequently the fluctuations will travel through the transition in whatever configuration they were and with randomly oriented order parameter. As a consequence you will have many small domains and very inhomogeneous direction of the order parameter. In superconductor for instance this will not be an equilibrium state so the suppercurrent will start to flow an the system will end up in more-or less homogeneous phase but large number of abrikosov vortices. In ferromagnet you will have many domains costing too much energy so the the domain walls will start to annihilate creating other kinds of excitation.

The whole thing is very nicely described in this article

Not the answer you're looking for? Browse other questions tagged condensed-matter solid-state-physics terminology phase-transition non-equilibrium or ask your own question.