Electric flux of a charged rod through a uniform disc

I have an assignment regarding electric flux. The question I was given has the following sketch: 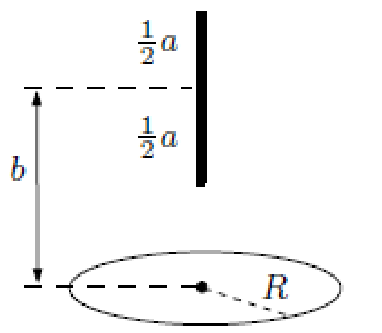 In the second question we were asked to calculate the flux through the disc from the rod, and about the energy content of each object by itself and then the system altogether (that's where I got lost).

I know that if I divide the force by the charge I get the electrical field, the question is at what point? the whole disc?

If that is the case I can use the flux formula and Gauss law but I'm not sure. 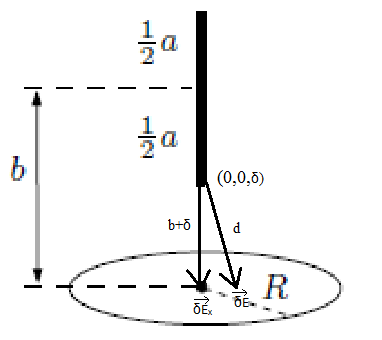 Use the conical flux formula where for a charge at the tip of a cone, the flux through the base of a cone with semi vertex angle $\theta$ due to a charge at the top of the cone is $$\phi_E=\frac{q(1-cos\theta)}{2\epsilon_0}$$

Replace the $q$ with $dq$, take the center of the rod as origin, and the rod as the x-axis. For a point at a coordinate x on the rod, find $cos\theta$, put it in the the equation and integrate between $-a/2$ and $a/2.$

Not the answer you're looking for? Browse other questions tagged homework-and-exercises electrostatics electric-fields charge coulombs-law or ask your own question.

7
Non-conservative electric fields due to changing magnetic flux?
4
Gauss Law for a Modified Coulomb's Law
3
Why is the Electric Field inside a hollow sphere zero but not for a ring?
3
Distance independent Coulomb's Law
0
Explanation of the negative integral
1
Notion of flux and field lines
6
Proof of Coulomb's law in two and higher dimensions