Force at axis of spinning wheel

This is a newbie question, but I don't quite understand the forces at work when an object is rotating.

Does that mean that in a car, the wheels on one side constantly want to fall off, while on the other side they want to move to the enter of the axis?

You have a bit of a misconception of the right hand rule. To be fair it is a bit confusing but what it really applies to, is the concept of torque.

The direction your thumb is pointing does not actually show the direction of the force but the axis around which it is applied. This comes in handy because the direction in which the force is applied on a wheel is always in a different direction. By expressing the force in terms of the vector normal to it we can describe a force acting on any point of thw wheel's circumference.

So the force is always tangent to the circle of the wheel and not outwards like you assumed.

The right hand rule (or left hand rule in the UK) is used to figure out the result of a cross product operation. It can be applied to many things. In your case, with a rotating body, you want to establish the net torque of an applied force.

There are many ways to use your hand with cross products. See some examples below: 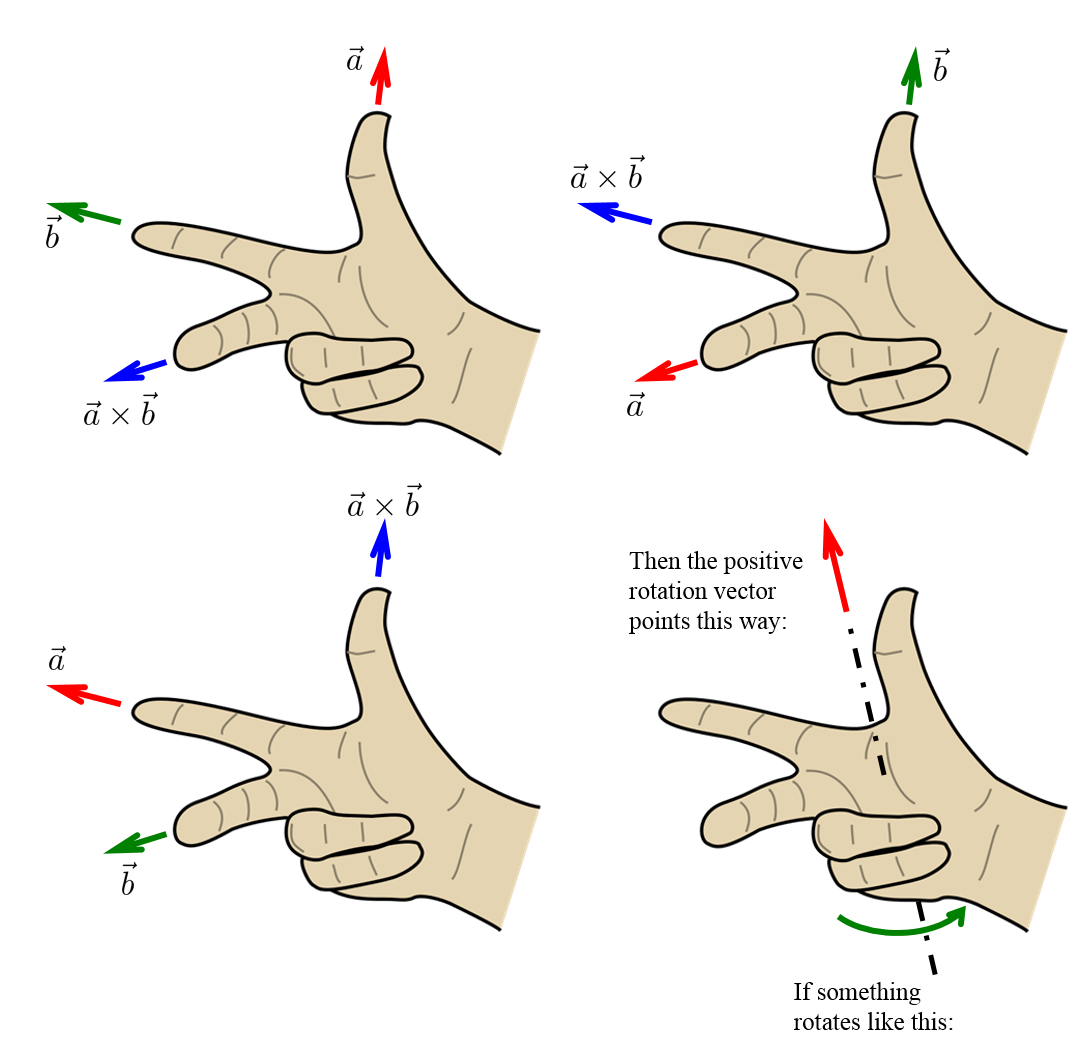 I have color coded, with red the first given vector, green the second and blue the result of the cross product. Also included is the convention for positive rotations and torques as vectors. Twisting in the direction of the green curved arrow is indicated by a vector along the red arrow.

PS. I use the right hand rule to figure out which way to screw or loosen a bolt. I set my thumb towards the direction I want the bolt to go and twist in the direction my fingers are going.

The answer is - you point along the axis of rotation, because that's the only direction that is constant while all the points in the rotating object are moving in different directions. Once we have the axis defined, we need a convention for the sign: when I look at an old-fashioned vinyl record player, does the angular momentum vector point up, or down? Now the record rotates in a clockwise direction - and if I hold my right hand so my fingers point along the direction of rotation, then my thumb is pointing down.

Now when I have a rotating object that is subject to torque (which can also be described as a vector quantity), then the object will change its angular momentum and this change in angular momentum will follow the normal rules of vector addition: if the torque vector is aligned with the angular momentum vector, the object will accelerate (start to spin faster); if it is pointing 180° the other way, the object will decelerate (slow down); and if the torque is pointing in any other direction, it will result in precession: that is, the direction of the spinning axis will change in a way that is initially not at all intuitive. That's how gyroscopes can be explained...

Not the answer you're looking for? Browse other questions tagged forces angular-momentum rotational-dynamics vectors rotation or ask your own question.

3
Direction of torque precession of a spinning wheel
1
Torque and angular acceleration with bicycle wheel
3
Gyroscopic Force/Torque of a Constrained Wheel
1
Where does the energy used to rotate the axis of a flywheel orthogonally go?
2
The dynamics of a cornering wheel
1
Torque in a rotating wheel about a axis