The LIGO Gravitational Wave Detection: have deep-mantle earthquakes been ruled out? [duplicate]

Everywhere I've looked so far that talks about the possibility the LIGO detection was an earthquake, involves being ruled out due to the large distance between the two LIGO sites. Two identical earthquakes would be necessary is what I'm reading.

I don't think this is correct, because earthquakes are recorded as deep as 800 km below the surface. There's a region in the mantle, I should think, from which earthquakes may register identically at the two locations. Particularly as we're talking very tiny vibrations.

What I would like to ask is, firstly, were deep-mantle quakes controlled for? As a follow-up question, was there a consulting academic seismologist with deep-mantle expertise on the LIGO team?

Response to the decision to mark this question as duplicate 22/08/2016 My question was marked duplicate and I am providing my response here in accordance with site policy: Any replacement of a more detailed specific and explained problem, with a much more generic question that makes no mention nor indicates any awareness of the specific matter it is supposed to replace, is never legitimate. In the rare caseas of exception to this a rationale would be expected.

My question was based on the published characterization of the scope for seismic activity to generate detection events mistaken for gravity waves, in which the possibility of deep mantle (a long way down) seismic events is not considered . There is significant evidence that this isn't a trivial oversight or simply a detail left out for reasons of brevity .

The two LIGO sites come as a solution to the problem of Earth sourced anomaly detections. The argument provided by LIGO is that it would take two identical but independent seismic events for a kLIGO gravity wave detection to be explained this way. The reasoning is apparently airtight and demonstrated in multiple independent ways. Just one is that for the detection to be seismic, an event at one location would have to reach the other at superluminal speeds.

So it's very clear the scope that the LIGO guessed for seismic activity. But the reasoning is flawed because, for example, a seismic event deeper in the mantle, say 100km or 200km, could plausibly reach both sites at the same instant without having to exceed the normal seismic velocities.

A secondary question was whether the LIGO team had been guessing and using common sense about the scope for false readings from seismological sources, or was an academic or professional seismologist retained.

That is a legitimate, unanswered, question for a plausible oversight in the LIGO planning and execution. There's no way that this is replaceable by a naive generic question about a philosophical matter of provability.

Responses to Anna V and Rob Jeffries 22/08/2016 This is my reasoning by way of response to the excellent answers provided by Anna V and Rob Jeffries. In one sense they give the same answer in that both ultimately argue that LIGO would have taken this into account and/or even if they didn't the matter is implausibly unlikely.

The LIGO is cutting edge technology applied to an extremely high standard and there is no suggestion otherwise in my question. But nor is the fact of that a legitimate counter argument. This is because the question can be reformulated at any number of levels. For example, let's say you think LIGO's planning and execution was so high quality that something like this would be 'caught'.

But let's suppose you are correct, is the resulting picture in accordance with the high standards of LIGO? It is simply a logical fact that the arguments provided by LIGO explicitly embed the assumption that quakes only happen near the surface. That is the basis of their reasoning for having 2 sites. So despite the precision damping that you mention, the problem was serious enough to them that they have planned, executed, and written extensively about, the ultimate solution for that problem. And that ultimate solution is flawed at least intellectually, because there is a built in implicit assumption seismic activity occurs near the surface only

I think that's an issue for LIGO on some level. If the detection didn't happen that, then it becomes an issue of an inaccuracy, that spreads from the flawed assumption, all the way through papers and into the public consummation bumpf. Presumably including the elected or other sub-committees of funding/grant decision makers. Failing that, it's just good housekeeping to note down the imperfections of a project for learning purposes.

From the FAQ of LIGO:

LIGO uses two basic strategies to shield the detectors from vibrations of the Earth. They are referred to as “passive” and “active” vibration isolation systems. 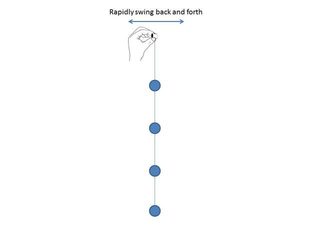 LIGO’s passive vibration isolation system absorbs vibrations before they reach the all-important mirrors. One way these vibrations are absorbed is through a pendulum suspension system: LIGO’s main mirrors are suspended at the bottom of 4 pendulums--each node in the pendulum being a hefty mass (LIGO's mirrors alone each weigh 40 kg, or 88 lbs.). Since heavy things don’t like to move (that’s Newton’s Law of Inertia), by their sheer weight, each mass at the top of each step of the 4-step pendulum absorbs vibrations from the mass above it until nothing reaches the lowest, all-important hanging mass: LIGO’s laser-reflecting mirror. To illustrate the effect for yourself, tie four heavy washers or bolts together in a line, each one separated by an equal length of string (see illustration at left). Hold the string at the top and rapidly shake the top back and forth by a small amount (you're simulating vibrations from the environment around LIGO). You'll see that the lowest mass just won’t move much at all compared to how much you're moving the top mass because each mass in the chain absorbs or ‘damps’ the vibration, isolating the last one from a lot of noise above it.

As it suggests, “active” isolation is an active process whereby a set of sensors feels vibrations and sends signals to “force actuators” that generate counter-forces to cancel out vibrations. This is the same basic principle by which noise-cancelling headphones operate. In LIGO's case, the active isolation process actually occurs outside of the suspension system, removing the largest vibrations before they reach the first step in the pendulums described above (as the name implies, LIGO's suspensions are also 'suspended' below the active seismic isolation platforms). The suspensions then remove the smaller vibrations, leaving LIGO’s mirrors perfectly still and primed to detect gravitational waves.

So it is not " ruled out due to the large distance between the two LIGO sites" but because the mirrors are constrained to be at rest, no matter what ground vibrations come up.

Edit after finding the paper Reducing the effect of seismic noise in LIGO searches by targeted veto generation: it seems that seismology noise experts are among the ones signing the LIGO publication, so due respect to seismological noise has been paid.

It isn't ruled out. The LIGO team have carefully looked at, modelled and empirically measured all sorts of possible noise effects that could give the observed signature in both detectors within a few ms of each other. This includes a battery of other instruments which monitor all sorts of things, including seismic activity, that are used to veto sections of data so that they aren't used in any analysis.

The confidence with which they are suggesting they believe this event was not caused by any noise source that they have considered or measured, is quantified by saying that noise would only produce a signal that looked like the merger of two black holes in both detectors once every 200,000 years of LIGO observation.

Note that this "false alarm probability" does not rule out some other cause besides the merging of black holes for the event. As far as I know, nobody has suggested a credible alternative that can mimic the chirp signature of merging black holes.

However, if anybody has any ideas, then now is the time to publish and make predictions for the distribution of such events and their strengths, since I imagine it is quite likely that LIGO will publish results from several months of observing shortly.

As far as your specific suggestion goes, would a deep mantle earthquake produce almost simultaneous signatures in detectors thousands of km apart that lasted for a fraction of a second and swept across an order of magnitude range in frequencies? Given p-wave velocities of 5 km/s or so, there would have to be an incredible lack of any wave dispersion/refraction/diffraction for a wavepacket to arrive in such a short space of time after travelling thousands of km?

Not the answer you're looking for? Browse other questions tagged gravitational-waves ligo earthquake or ask your own question.

7
Is there absolute proof for gravitational waves?