Final Velocity of an object on Parabolic Curve

I decided to participate in a school challenge involving launching a marble off a curved ramp from a given height and determining the distance the marble will travel. I can no longer participate, though I remain curious as to the correct model one ought to use. Using the kinematic equation it is clear that I can find the distance traveled given the final velocity of the marble coming off of the curve; however, it is there my problem lies. I have created the following model, though I fear a few caveats may have arisen during my solving process. My attempted solution began as such: 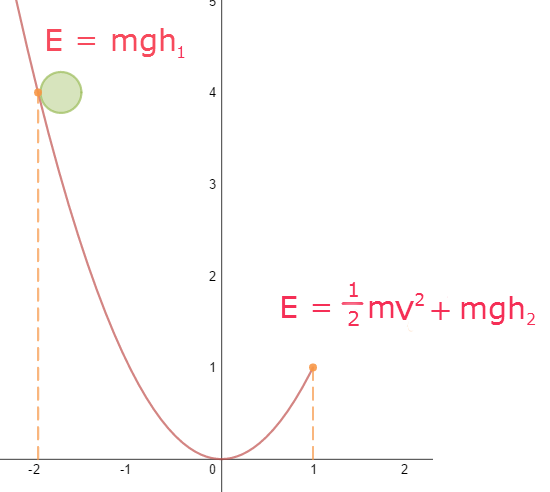 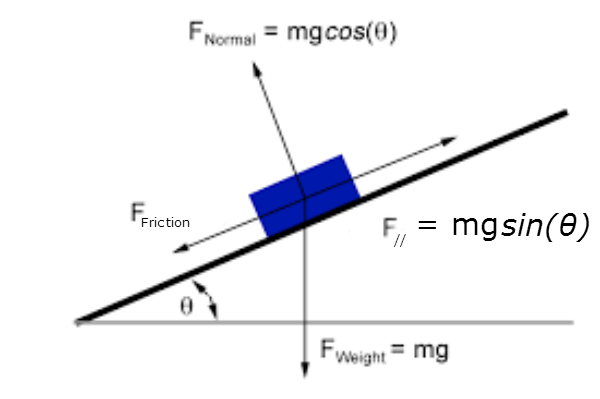 Allowing the force of friction to be equal to some constant $\mu$ multiplied by the normal force, and also assuming that the magnitude of the normal force is equal to that of the perpendicular component of the weight force, we get that $$F_{\text{net}} = F_{//} - F{_\text{friction}} = g\big[\sin(\theta) - \mu \cos(\theta)\big]$$ To find $\theta$ in terms of $x$ we reference the following diagram: 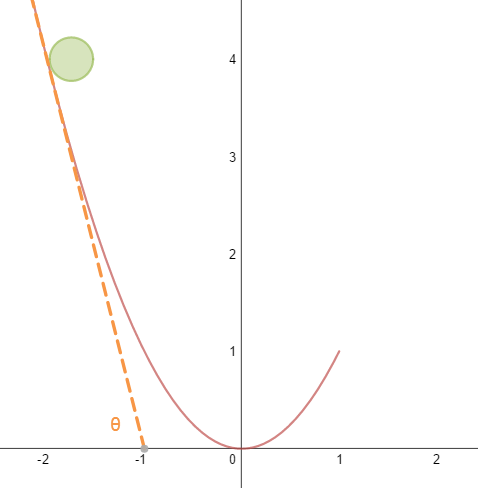 Here is my first large problem; when I simplify this I get $\frac{(2x-\mu)g}{\sqrt{4x^2+1}}$. I would expect acceleration to be positive for negative $x$-values (where the ball is falling and "speeding up") and negative for positive $x$-values (where the ball is rising up and thus "slowing down"). As a result, I would say that the force of gravity acts with $F_{\text{net}}$ for negative $x$, but works against it for positive $x$; in contrast, the force of friction always acts against the net force. However, my model does not appear to support either of these observations. Likewise, the model predicts negative acceleration for negative $x$ and positive acceleration for positive $x$ (with even stranger fluctuations if the coefficient of friction is non-zero) Accordingly, If anyone has any suggestions for how to fix this model such suggestion would be greatly appreciated, being necessary for my following question

Regardless, since we know that $F_{\text{net}} = ma$, we can say that $$a = \frac{F_{\text{net}}}{m}$$
Using this, I hypothesized that I could simply integrate along the values of $a(x)$ from point $a$ to point $b$ to find the find the final velocity at point $b$; however, a friend pointed out that my model (broken or not) does not account for centripetal force; is this so, and how would I include centripetal force most easily if needed?

Unless you have some serious friction going on or moderate friction over long distances, you can neglect the friction and still get a very accurate measurement. A lot of the energy that would normally be used for moving the marble linearly goes into the rotation of the marble itself. This slows it down significantly, which is why you may have not been getting "good enough" results.

If you want to calculate the friction, then you can do this by using the arc length of the parabola, the coefficient of kinetic friction for your surface, and the normal force on the track. $$W_{\text{Friction}} = \int_{x_1}^{x_2}F_{\text{Friction}}dd$$ The kinetic friction of an object is given by the kinetic coefficient of friction of the surface times the normal force. You already figured out the normal force there. $$W_{\text{Friction}} = \int_{x_1}^{x_2}mgsin(arctan(2d))\mu_Kdd$$ From here, you'd integrate the force. With constant force, this just becomes Fd, but here it is not constant. I don't know if you know how to do integration, so take my word for it when I say that the result is $$W_{\text{Friction}} = mg\mu_k(\sqrt{x_2^2+1}-\sqrt{x_1^2+1})$$ Work is the change in energy. Tack this portion of your equation onto the total energy, and you'll figure out that the total energy of your marble by the time it launches off the ramp is $$\Delta E_P = \frac{7mv^2}{10} - mg\mu_k(\sqrt{x_2^2+1}-\sqrt{x_1^2+1})$$ Now you just need to solve for v. I recommend plugging in your numbers to make things easier. The friction shouldn't add a huge amount, but if you really want to be precise, there you have it. Good luck.

Not the answer you're looking for? Browse other questions tagged homework-and-exercises gravity friction velocity centripetal-force or ask your own question.

2
Is my understanding of the mechanics of skidding correct?
0
Banked Curve with friction
3
Why friction is not reliable for circular turns on horizontal road with high speed and sharp curve?
0
Finding the centripetal force at any random point in a wheel which is rotating as well as translating
3
finding velocity along a curve with kinematic equations using time
0
Question about centripetal acceleration when marble slides down sphere
0
How to find direction of friction on a banked curve?
2
How do we explain defying gravity by objects on the wall of a rotating drum?