What causes the expansion of space? [closed]

What is causing space to expand?

I did a google search on this and found lots of articles explaining that space is expanding but nothing as to why it is expanding.

If we look around the distribution of matter in the universe seems to be roughly isotropic and homogeneous (if we go to large enough scales). General relativity tells us that matter distributed in this fashion must evolve with time in a way described by the FLRW metric.

To work out exactly what happens we need some initial conditions, so we look around and estimate the densities of the various types of energy, and starting from these we can describe how the universe changes with time.

The simplest interpretation was that space was expanding, similar to the raisin bread model.

are you saying the cause of the expansion is general relativity

No, I am saying that in the framework of General relativity, i.e. four dimensional space described by an energy momentum tensor, a mathematical model has been built that incorporates data from astrophysical observations and uses elementary particle physics knowledge to model the beginning of the universe.

The model started like a four dimensional explosion at a beginning of time =0 but has developed to the undefined region at the left, rapid expansion, and then slower expansion as the universe we know is generated. 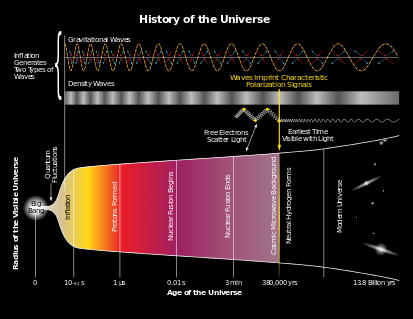 Not the answer you're looking for? Browse other questions tagged soft-question space-expansion or ask your own question.

0
Universal Space Expansion
2
By what means is space expanding?
19
How does the Hubble parameter change with the age of the universe?