What sustains a rigid body's rotation at its constant angular(rotational) speed?

Continuing from the following scenario from my previous question Centripetal force of a rotating rigid body? :

Consider someone pushing a roundabout in a playground. Initially the roundabout is stationary, but when it is pushed, it rotates with increasing rotational speed.

The force of the push is balanced by the reaction force exerted by the support at the centre of the roundabout. The forces are equal in magnitude and opposite in direction, so the roundabout is in translational equilibrium. But they have different lines of action, so there is a resultant torque, causing the playground to rotate and have angular momentum.

Roundabout has angular momentum [as well as kinetic (rotational) energy] , which cannot just disappear. So you need some negative torque (e.g. frictional torque) [or negative work of torque] to change angular momentum [kinetic energy] in order to stop roundabout.

It is an analogous question, why a particle keeps moving. It keeps moving because it has momentum [as well as kinetic (linear) energy]. So you need some negative force (e.g. kinetic friction) [or negative work of force] to change momentum [kinetic energy] in order to force particle to stop.

If differential forms of 2nd Newton law present a problem, you can also use non-diferential:

But beware, the second (rotational form) is valid only for fixed axes. For non-fixed axes you have to use complex Euler's equations.

Imagine two masses connected by a spring, like this:

If the entire thing spins at a constant angular velocity, the masses are moving in circles. Then $m_1$ and $m_2$ must have forces on them, since circular motion is a form of accelerated motion.

These forces are supplied by the spring. The spring will stretch somewhat, exerting forces pulling the masses back towards their equilibrium position. The magnitude of these forces is the usual centripetal force $m \omega^2 r$.

Now suppose you have a disk rotating like this: 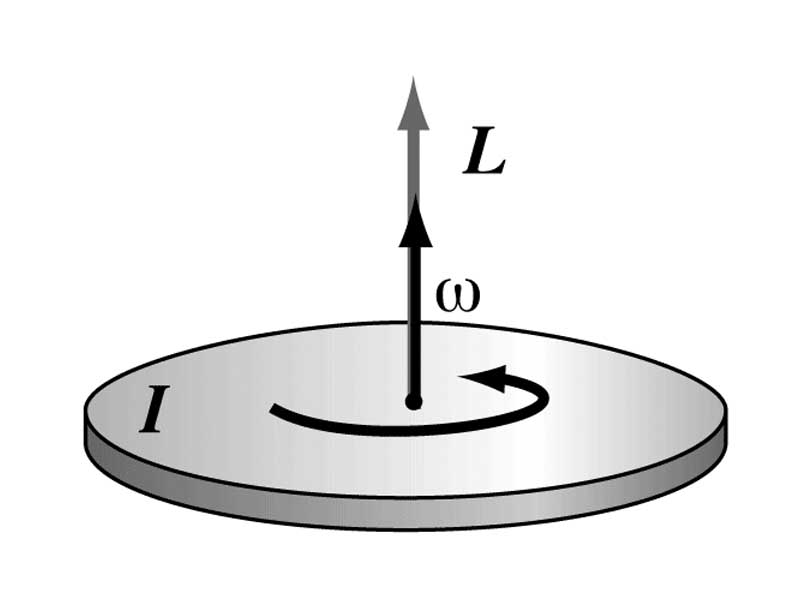 The situation is very similar. If you take a point on this disk (besides the center), it's going in a circle. Therefore, this point has a centripetal acceleration, and must feel a force. Where is this force coming from?

The answer is that the force is coming from the disk itself. Imagine the disk as being a mesh of many points, all connected by springs. When you start the disk spinning, all the springs will stretch a little bit, exerting forces on the masses they're connected to. The net force of the springs on any given mass will be the centripetal force.

The way we usually express this is to say the entire disk is under tension (negative pressure). The tension decreases from a maximum at the center to zero at the edge. The gradient of the tension gives the force per unit volume, and that force is $\omega^2 r \rho \mathrm{d}V$ on a volume element $\mathrm{d}V$.

Not the answer you're looking for? Browse other questions tagged newtonian-mechanics forces classical-mechanics rotational-dynamics or ask your own question.

3
Centripetal force of a rotating rigid body?
1
What rotates a door : torque or centripetal force?
4
Does a rotating object have more inertia, mass and gravitational pull?
0
Circular motion of car on circular track with help of friction - its translational component and rotational component?
0
Rotational dynamics regarding uniform rod
0
Equilibrium of a body in torque problem
2
Why do we feel a force in circular motion?