Consider someone pushing a roundabout in a playground. Initially the roundabout is stationary, but when it is pushed, it rotates with increasing rotational speed.

The force of the push is balanced by the reaction force exerted by the support at the centre of the roundabout. The forces are equal in magnitude and opposite in direction, so the roundabout is in translational equilibrium. But they have different lines of action, so there is a resultant torque, causing the playground to rotate and have angular momentum.

Okay, my question is, how about the centripetal force that exists whenever there is circular motion? Where does/would it come from?

In order to have a centripetal force, you must have mass that rotates around certain point. You should be more specific with your question, that is, you must tell us which mass is rotating and then we can tell you which centripetal force is responsible for that rotation.

Here is a more complete explanation on where does the centripetal force come from: Let's suppose we are standing in intertial frame of reference. As first Newton law states: if no force is exerted to a body, velocity of the body remains constant. Now what about rotating? In rotating velocity is not constant!

Consider the simpler system of a mass in 2D, connected to the origin by a massless rod that is free to rotate about the origin. When you exert a force perpendicular to the rod on the mass, the mass exhibits circular motion. In this case, the centripetal force needed comes from the tension exerted on the mass by the rod.

A similar situation happens for the roundabout: tensions in different parts of the roundabout act on each other to give the necessary centripetal force.

The centripetal force isn't a "new" force that comes out of nowhere. It's made up of normal forces.

Allow me to explain:

Now, note that velocity is a vector. In UCM (uniform circular motion), you have a body with constant speed, but the direction of its speed varies. 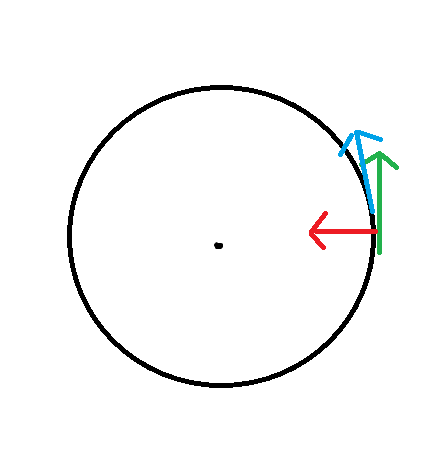 If you are whirling the stone in a horizontal plane via a rope, this force is the tension force. If you are whirling it in a vertical plane, it is the combination of gravity and rope tension. It the ball is rolling in a bowl, it is the combination of gravity and reaction(normal) force. If this is a planet-satellite system, the force is just gravity.

A general term for this force is "centripetal force". CPF is a mixture of pre-existing forces, depending on the situation, as explained above. Using some calculus, we can prove that $\mathrm{CPF}=\frac{mv^2}{R}$, where $m$ is the mass of the particle, $v$ is the instantaneous velocity, and $R$ is the radius of curvature (just the radius in case of circular motion).

So it doesn't "come from" anywhere--it's not a new force. It's just a name for pre-existing forces when they create circular motion. That's all.

Not the answer you're looking for? Browse other questions tagged newtonian-mechanics forces rotational-dynamics centripetal-force or ask your own question.

2
Why did they add a Centripetal Force in the Free-Body Diagram?
2
What sustains a rigid body's rotation at its constant angular(rotational) speed?
0
Why doesn't the Gravitational Force causes body to fall towards orbital center moving with constant tangential speed?

2
What sustains a rigid body's rotation at its constant angular(rotational) speed?
2
Reference frame and centrifugal force
2
What rotates a door : torque or centripetal force?
0
Circular motion of car on circular track with help of friction - its translational component and rotational component?
0
Does torque provide rotation?
2
Tension in a rotating object
0
Equilibrium of a body in torque problem
2
Why do we feel a force in circular motion?
0
Explaining rotation without mathematics