If a nucleus has spin-parity 0$^+$ in its ground state (even-even nucleus), does this necessarily mean that the ground state is a spherical one? Or does this apply only to closed shell nuclei? E.g. compare $^{232}$Th and $^{208}$Pb.

If a quantum system has angular momentum of zero, then it is necessarily spherical. One can see this as rob mentioned by looking at the Wigner-Eckart theorem and seeing that only scalar moments are allowed. Another way of seeing this is remembering that the total angular momentum operator $J$ is the generator of rotation transformations. For some rotation by an angle $\delta\theta$, we have the rotation operator $$ U(\delta\theta) = e^{i\delta\theta\cdot J} $$ Here the dot means that we choose some axis about which to rotate, and we take the $J$ projection on that axis. The effect of the rotation operator is $$\Psi(r,\theta+\delta\theta) = U(\delta\theta) \Psi(r,\theta)$$

In the case where $J=0$, then we have $e^{i\delta\theta\cdot 0}=1$ for any rotation angle. This means that no matter how we rotate the state $\Psi$, it looks the same, which is exactly what is meant by spherical symmetry.

Now to the question of intrinsic deformation. The way deformation arises is easiest to understand if you think of two particles in a spherical mean field potential. Say we put the first particle into a state with orbital angular momentum $\ell>0$. Because of the spherical symmetry, all projections $m_{\ell}$ have the same energy and we may as well put it in the maximally projected orbit $m_{\ell 1}=\ell$, meaning it's roughly orbiting in the $x$-$y$ plane. It's angular shape looks something like this: 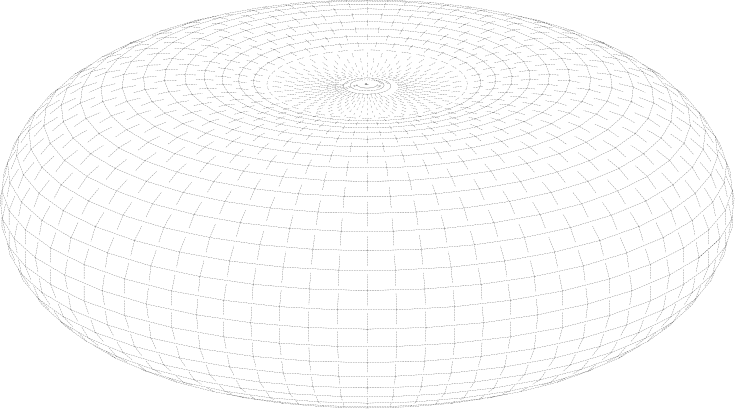 The physical $J=0$ state is given by the deformed state averaged over all directions, yielding a spherical state.

We could also use the above formula to project out a state $\Psi(\ell_1,\ell_2,J=2,M=0)$. In this case, due to the Clebsch-Gordan coefficient we would be averaging not equally over all directions, but favoring some particular directions. It so happens that the distribution we get is the same as you'd get by rotating the deformed intrinsic state about a particular axis. If you project out a state $\Psi(\ell_1,\ell_2,J=4,M=0)$, then it's as if you rotated if faster.

This is how the picture of a deformed rotor arises. But you should keep in mind that the intrinsic state is not the physical state, just a convenient way to think about it. The "experimental" $\beta_2$ values are obtained by matching electromagnetic transition properties to the predictions of a rigid rotor model.

For a more formal discussion of this, I'd suggest Bohr and Mottelson's Nuclear Structure Volume 2, or Unified Theory of Nuclear Models and Forces by Gerry Brown.

Interesting question. The Wigner-Eckart theorem seems to suggest that any $0^+$ system should have spherical symmetry. The theorem proves that, in any quantum-mechanical system with both a spin and other spherical tensor moments, you must always be able to project all the spherical tensors on the spin axis. (Classical explanation: otherwise the other moments would average to zero as the system spins.) A consequence of this is that a spin-zero system can have a monopole moment but no higher. A spin-half system can interact with a dipole field --- by flipping spin --- and with monopole field, but not with higher multipolarities; we would say it has a dipole moment but no quadrupole moment. A spin-one system can have monopole, dipole, and quadrupole moments, but no higher, for the same reason.

However, we have experimental evidence to the contrary in nuclei. Nuclei are observed to undergo "collective motion" of the protons and neutrons. One line of evidence for this collective motion is "rotational bands" of energy levels: a series of nuclear states which all have the same parity, separated in angular momentum by $\Delta J = 2\hbar$, with energies that fit a spacing pattern like $$ E_J = E_0 + \frac12 I J(J+1). $$ This is the energy you would predict from a rigid rotor with rest energy $E_0$ and moment of inertia $I$. The rotor spins down by emitting a series of quadrupole photons (thus $\Delta J=2\hbar$) in rapid succession. At different spins, different moments of inertia are favored, so in a very high-spin nucleus you'll see transitions from one rotational band to another. In the literature the preferred value for $I$ at a given rotational energy is called the yrast ("dizziest") configuration of the nucleus. I'll let you convince yourself that the moment of inertia --- a rank-2 tensor --- is essentially the mass quadrupole moment.

All even-even nuclei have ground states with $J^P = 0^+$. However in some nuclei the ground state is a member of a rotational band: there's a series of transitions $\cdots \to 4^+ \to 2^+ \to 0^+\text{ (g.s.)}$ with the spectrum above. In that case the simplest story to tell about the difference between the $2^+$ state and the $0^+$ state is collective motion of the entire nucleus, which is possible only if it has nonzero quadrupole moment.

The National Nuclear Data Center lets you color the chart of nuclides, for even-even nuclei, by the energy of the low-lying $2^+$ or $4^+$ states, or by a "quadrupole deformation parameter $\beta_2$" derived from the coupling of the ground state to $E2$ photons. I, like you, had the impression that magic or doubly-magic nuclei are spherical; however there are nonzero deformations $\beta_2$ listed for all the doubly-magic nuclei from $\rm^{16}O$ up to (but excluding) $\rm^{208}Pb$. Hmmmm.

17
Do neutrons exhibit momentary small charges due to the movement of its quarks?
12
Why do spin-$\frac{1}{2}$ nuclei have zero electric quadrupole moment?
5
Quadrupole moment of 3- state in 208Pb?

2
Ground states in the shell model for odd-even nuclei
4
Orbital angular momentum of nucleus?
5
Quadrupole moment of 3- state in 208Pb?
1
Can free particle (eg. unbound electron or proton) have angular momentum other than spin?
1
Spin of cobalt-60
0
C-15 spin and parity at ground state
1
Is the arrangement of nucleons within a nucleus identical between heavy elements of the same type?
9
How do you go about guessing the ground-state spin and parity of a nucleus?
1
Possible spins and parities of $^{38}_{17}Cl$