Why is the Elastic Modulus of concrete smaller than that of steel?

I am trying to get a basic feel for what the Modulus of Elasticity means for different materials. My understanding is that since E = stress / strain, a higher E means a stiffer material, b/c it takes more force to produce the same amount of strain.

I was surprised to learn that Elasticty for concrete (24 GPa) is an order of magnitude smaller than that of steel (200 GPa). Doesn't this mean that the same force will result in 10x more deformation in concrete, as it will in steel? Is this really true?

A linear simulation in SolidWorks shows that it is indeed the case: 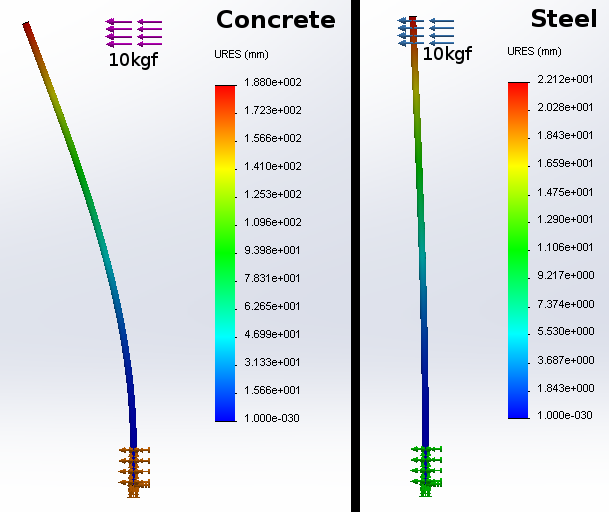 Intuitively, it feels that concrete should be more rigid (and brittle, of course) than steel, yet these results suggest that it is not true.

Brittleness and modulus of elasticity are two very different things. The modulus of elasticity conceptually tells how much stress can you apply to get a certain strain without the material failing. More precisely the modulus is the slope of the strain to stress graph in the linear regime, which can also be called the elastic regime. The exact way in which a material would fail is a different question. It doesn't have to necessarily break (as implied by thinking about brittleness), it might also bend permanently for instance. Actually in construction of example, workers always bend steel to create permanent deformation in order to get bars of steel at right angles.

Moreover it is ill advised to try and figure out the behavior close to failure from the modulus, as all of these constants give only the linear approximation when in reality for large strain the behavior is very non-linear, and is closer to a parabola with the maxima telling us when there's some failure.

That being said, in solidWorks you've done a linear analysis. While the computer will let you do anything in reality the beam of concrete is well beyond its failure point where linear analysis has nothing to do with reality. If you'll try to repeat this the concrete beam would have been broken.

The linear analysis is usually thought of as valid for tiny strains in the area of 0.2%. Even though I'm not sure I remember this value correctly this is the order of madnitude.

I think solidworks doesn't take into account the brittleness of concrete. The deformation you see in the simulation is correct, assuming that the concrete is perfectly elastic. However, in real life, that concrete, as you have guessed would have shattered/cracked with such a deformation.

That's what I think.

Not the answer you're looking for?Browse other questions tagged elasticity stress-strain or ask your own question.

4
Calculating stress without strain
3
Material strain from spacetime curvature
0
Why don't we take into account the width contraction of the wire in calculating the stress strain relationship for a stretched wire?
3
Why is steel-reinforced concrete stronger than ordinary concrete?
2
Why is elastic modulus greater than shear modulus?
1
Computation of strain in oval frame
32
Clarifying the actual definition of elasticity. Is steel really more elastic than rubber?
2
Why is torsional shear for a circular cross-section maximum at the biggest radius
3
Young's modulus: a measure of stiffness, or elasticity?