Why can't we put an object anywhere in the earth's orbit around the sun instead of Lagrangian points?

If we place an object in the earth's orbit around the sun, it should have the same orbital period right? 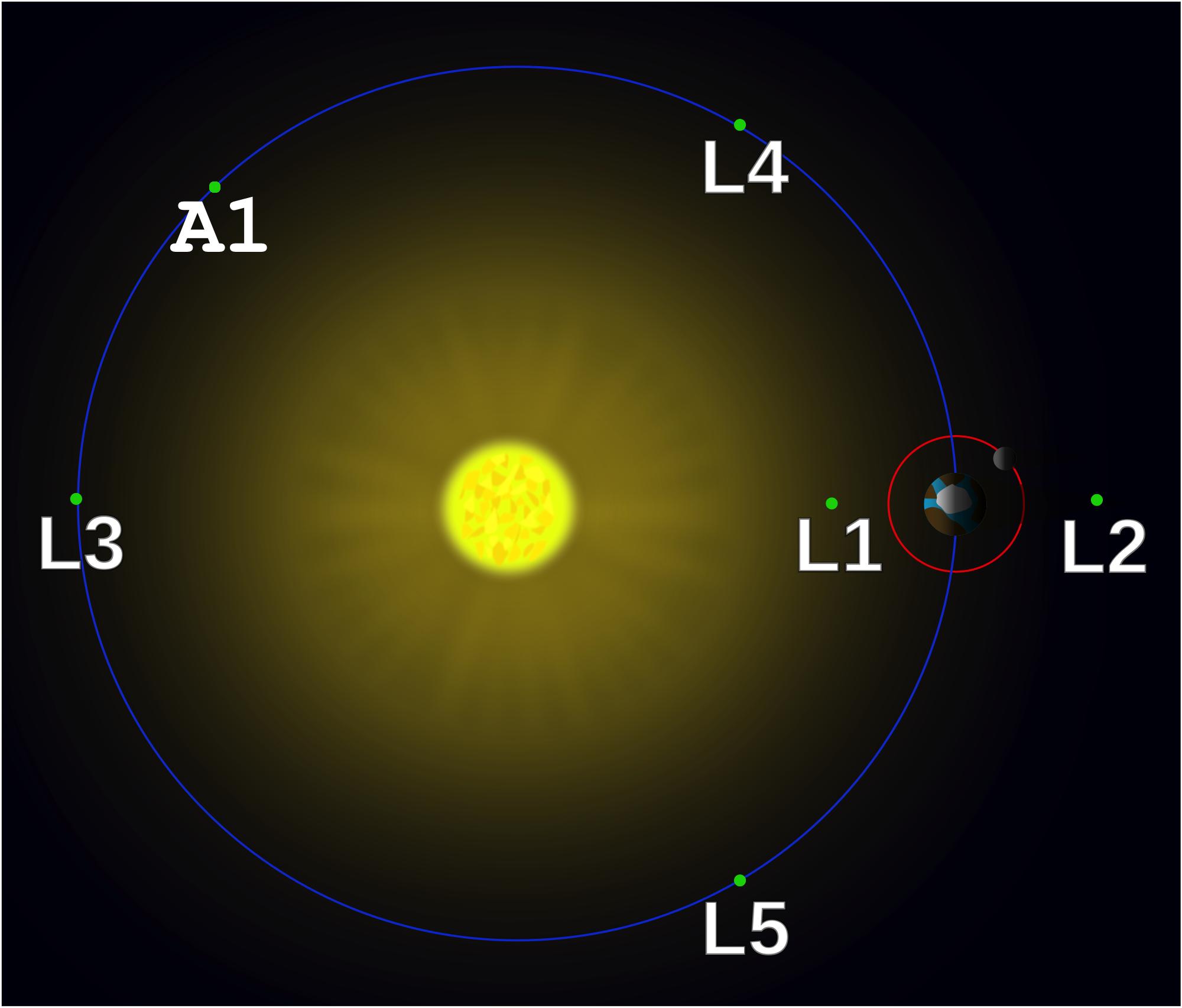 For example, what would be the behavior of an object in orbit at point A1? It is at the same distance from the sun as earth and is sufficiently far away from the earth to prevent earth from gravitationally influence it(is it?) . Shouldn't the object at A1 remain stationary with respect to the earth?

Here's the key point: although they are often drawn this way, none of the Lagrange points lie exactly on the orbit of the less massive body. This is obvious for L1 and L2, but it is also true for L3, L4, and L5 as well.

First off, it's important to realize that the Earth does not technically revolve about the Sun. Rather, the Earth and the Sun both revolve around their common center of mass, a point called the barycenter of the system. This imaginary point is technically inside the Sun for the Sun-Earth system; but it's not exactly at the center of the Sun.

L3 lies slightly farther from the barycenter of Earth-Sun system than the Earth does. An object moving in a circular orbit of the same period as the Earth but at this slightly increased distance would need some additional force to keep it moving in this circle (as opposed to if it was just orbiting the Sun on its own). But it does in fact receive a little more force than it would in the absence of the Earth: first, the Sun is a little closer to it (since it's opposite on the opposite side of the Sun from the barycenter); second, the Earth is also pulling on it a little bit. The L3 point is the point where all of these forces come together perfectly, so that the net force on an object is of exactly the right magnitude to keep an object rotating about the barycenter with a period of one year, and such that the net force is directly towards the barycenter.

L4 and L5, meanwhile, form an equilateral triangle with the two massive bodies—not the barycenter. This means that neither the Sun nor the Earth is pulling an object at that point directly towards the barycenter. This would be true of your A1 point as well. But what's special about the L4 and L5 points is that the net force from the Earth and the Sun is, once again, of the correct magnitude and direction to keep an object in a circular path about the barycenter of the system. An object at the point A1, on the other hand, will experience a force that does not point towards the barycenter of the Earth-Sun system, and so eventually an object placed at that point will drift away.

These points are often obscured by the fact that the Sun-Earth system and the Earth-Moon system have rather lopsided mass ratios: 330,000 for the Sun-Earth system, and a "mere" 81 for the Earth-Moon system. This means that in these systems, the barycenter is actually inside the more massive body, and so it's difficult to distinguish between "both bodies revolve about the barycenter" and "the less massive body revolves about the more massive one." This is why, as I noted above, the Lagrange points L3, L4, and L5 are usually draw as though they lie on the orbit of the less massive body, and the more massive body is treated as stationary. But if you look at a system like Pluto-Charon, with a mass ratio of a little over 8, the distinction becomes much more important, and the deviations from the "idealized" locations become much more noticeable. I whipped up a diagram of the Lagrange points in the Pluto-Charon system below; Pluto and Charon themselves (the pink and grey circles) are not to scale, but everything else is. The yellow dot is the barycenter of the system, and the white crosses are the Lagrange points.

Well, what generally happens when you put two massive objects floating in space with zero relative velocity is that they fall together. This is no different for the Earth and some other satellite in the same orbit around the sun: they may start out orbiting the sun at the same distance from the sun and some distance apart, but they still attract each other gravitationally. The presence of the sun and the angular momentum complicate how exactly they fall together, but it's easy to show that they won't maintain the original orbit indefinitely.

Not the answer you're looking for? Browse other questions tagged newtonian-mechanics newtonian-gravity orbital-motion stability or ask your own question.